Off topic discourse and banter encouraged.
8 posts • Page 1 of 1

<<We may not be colonizing Mars or putting another man on the moon, but the Obama administration took its first step toward Big Science innovation on Tuesday when it unveiled the Brain Research Through Advancing Innovative Neurotechnologies (BRAIN) initiative, along with a $100 million kick-start. The BRAIN initiative’s goal is just as lofty as space travel: understanding and mapping the human brain.

“As humans, we can identify galaxies light years away,” Obama said at a press conference on Tuesday. “We can study particles smaller than an atom. But we still haven’t unlocked the mystery of the three pounds of matter that sits between our ears.”

The scientific community has largely responded to the project with delight. “I think this is a fantastic, historic day,” said Eric Kandel, a Nobel Prize–winning neuropsychiatrist at Columbia University. Kandel and his peers were skeptical when they first heard about the project, worried that funding for small projects would be diverted to the federal program and that the project lacked structure, he said. But now he feels the project is in “excellent hands,” he added. He also emphasized the potential the BRAIN initiative has globally. “Unlike going to the moon, this is an international enterprise,” he said. “If you cure Parkinson’s in New York City, you cure it all over the world.”

While the initiative has no specific set of goals or endpoint yet, a blueprint for the project was laid out in a recent article in Neuron, a neuroscience journal. It called for new technologies for 3-D brain imaging, novel ways of diagnosing and assessing neurological illnesses, particularly Alzheimer’s disease, and therapies for schizophrenia and autism.

The Obama administration is partnering on the initiative with the National Institutes of Health, DARPA (Defense Advanced Research Projects Agency, the Defense Department's research arm), and the National Science Foundation, as well as four private research institutes: the Allen Institute for Brain Science, the Howard Hughes Medical Institute, the Kavli Foundation, and the Salk Institute for Biological Studies.

But why focus on the brain now, with immigration reform, gun control, and the sequester to worry about? Dr. Clay Reid, a senior investigator at the Allen Institute and a Harvard Medical School professor, says it’s simply an “unprecedented time for neuroscience. It’s all happening at once, and for a good reason,” he said. “There are new electrical, optical, and genetic techniques, and the world is being energized by these capabilities. The ability to look into a living brain and literally see the activity of 1,000 different neurons is a dream come true for people who have been in the business for a while. Here, we don’t know what the goal is. What does it mean to understand the human mind? When will we be satisfied? This is much, much more ambitious.”

While Obama’s announcement was met mostly with praise, some are questioning the ethical implications of new neuroimaging technology, despite Obama’s pledge that his bioethics team will supervise all research. “The Brain Activity Map Project [BRAIN’s unofficial name] wants to understand how our brains do what it is that they do,” Luke Dittrich wrote in a recent issue of Esquire, “but it just so happens that the technology the project will develop to gain this understanding could also be used to make our brains do whatever they want. Wirelessly. From a distance.” Dittrich argued that the human brain is too complicated to be studied thoroughly with preexisting technologies. He pointed to sections of the Neuron article that indicate “it will ultimately become feasible to deploy small wireless microcircuits, untethered in living brains, for direct monitoring of neuronal activity. The truth is, most major scientific breakthroughs,” Dittrich wrote, “like the human minds that give birth to them, have light and dark sides. And some of those dark sides are darker than others.”

There are a wealth of potential ethical issues involved in how people access and alter their own brains, said Dr. Nita Farahany, a bioethicist at Duke University and a member of Obama’s Commission on Bioethical Issues. The commission will focus on the governmental and military uses of possible imaging technology, she said, and called for an “ongoing ethical component” to the BRAIN initiative, which may span decades.

Comparisons with that other Big Science project—the Human Genome Project, launched in 1984—intended to clarify the scope of the BRAIN initiative are misleading, experts say. The cost of the Human Genome Project, $3.8 billion, far exceeded the initial round of funding for the BRAIN initiative. And Kandel said the goal of the Genome Project, to map all genes in human DNA, was much clearer than BRAIN. “We knew the endpoint,” Kandel said. “But here, we don’t know what the goal is. What does it mean to understand the human mind? When will we be satisfied? This is much, much more ambitious.” And that’s a good thing, he said. “This is a bold, creative, wonderful experiment.”>>

I'm sorry, but where are the sections for Princess Bride quotes and gaming references? Surely Settlers of Catan information is stored with other game information and not all mixed in with "Useless Trivia"! And don't Douglas Adam books warrant their own section?
A closed mouth gathers no foot.
Top

Hmm... looks like neufer is on a journey of self discovery.

Not to mention that the "Social Skills" section is WAY too large.
Art Neuendorffer
Top

That did cross my mind...
A closed mouth gathers no foot.
Top

"Funny walk that kid has."
— Vince McMahon on Mr. Kennedy

When a character demonstrates a rather odd way of walking, often involving deliberate contortions.

Watch out for this after someone says Walk This Way. Also recall that one does not Silly Walk into Mordor.

Not to mention that the "Social Skills" section is WAY too large.

If what you say is true… I think “social skills” might have been smaller except for the need to fit readable text within its boundary. So I reckon that was “artistic licensing”. They also left out “gadget idiosyncrasies”.
Ed

Not to mention that the "Social Skills" section is WAY too large.

That did cross my mind... 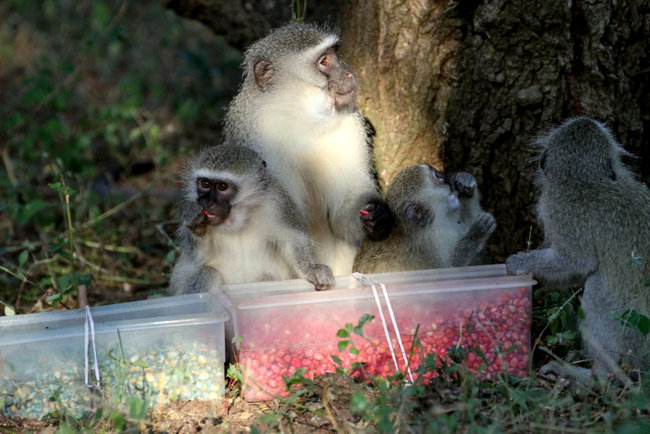 [b][color=#FF4040]Vervet monkeys relinquished their dislike of a colored corn when they changed location and saw other monkeys eating it. Credit: Erica van de Waal[/color][/b]

<<If you are eating lunch in Pittsburgh or Dallas, you might grab a sandwich and a Snapple to go. But should you get transferred to Paris, you will probably eat like the French: multicourse sit-down lunches plus a glass of wine. But it turns out people are not the only ones who make monkey-see-monkey-do cultural shifts. Monkeys, and apparently several other species, do, too. In a clever, groundbreaking study published Thursday in the journal Science, researchers showed that when Vervet monkeys roam, they act in when-in-Rome fashion.

Wild Vervet monkeys, trained to eat only pink-dyed or blue-dyed corn and shun the other color, quickly began eating the disliked-color corn when they moved from a pink-preferred setting to a blue-is-best place, and vice versa. The switch occurred even though both corn colors were equally accessible, side-by-side in open containers. Scientists said the monkeys relinquished their color convictions because they saw the locals eating the hated hue. The findings addressed a long-contentious question among animal experts: is animal behavior determined only by genes and individual learning, or can animals, like humans, learn socially?

“Culture was thought to be something only humans had,” said Carel van Schaik, an evolutionary anthropologist at the University of Zurich who was not involved in the study. “But if you define culture as socially transmitted knowledge, skills and information, it turns out we see some of that in animals. Now this experiment comes along and I must say it really blew me away.” He added: “Imagine you’ve just learned to eat pink corn and for a while blue corn was really bad, but then you move to an area where it’s the opposite and basically you wipe your slate clean. You think, ‘Oh, these locals, they must know what’s the best thing.’ ”

Other studies have found similar learning abilities in social animals. In the same issue of Science, researchers reported that by observing others, humpback whales learned to whack the water with their tail fins to attract prey. But while previous research often relied on anecdotes, observations or animals in captivity, the monkey study documented social learning in wild animals. “We long believed that cultural transmission was important,” said Frans de Waal, a primatologist at Emory University who did not take part in the study. “But I never thought it would be at the scale where the results would be so strong.”

The scientists set out pink and blue corn in adjacent Tupperware containers for four groups of wild monkeys in neighboring regions in a South African reserve. A study leader, Erica van de Waal, a researcher at University of St. Andrews in Scotland, said she wanted to use red and blue, shades monkeys are known to see because they are the colors of male Vervet genitalia. But South African grocery stores stocked mostly blue and pink food coloring because people use them for cakes celebrating girl and boy birthdays. After trying vinegar and chilies to make corn taste bitter, researchers settled on soaking corn in acrid-tasting aloe leaves. Pink corn was “aloe treated” for two groups; blue for the other two. Soon, monkeys in each group consistently rejected the colored corn soaked in aloe leaves.

After several months, researchers stopped treating the corn with aloe, but monkeys continued eating only the color that had never been made bitter. Dominant monkeys never sampled the disliked color; subordinate monkeys might, but only if dominants were hogging the liked color. Baby monkeys, which received no color training, instantly ate only what their mothers ate, even squatting on the other color, “totally ignoring that there was an edible color under their feet,” Dr. van de Waal said.

Most strikingly, when male monkeys migrated from a different-colored region, they ate the local color. The one exception was a blue-is-best male who entered a pink area with no dominant male, took control and continued eating blue corn. But he “might be a stupid male that had too much testosterone and was just not looking at what the others are doing,” Dr. van de Waal said. She said researchers hoped to test if social learning applied to other behaviors, like mating calls and grooming.

Experts said that to survive, species must balance experimentation with conservatism, so it makes sense that monkeys would develop rigid aversions to a once bitter-tasting color, and drop that aversion in another community. Both behaviors have advantages for survival, saving learning time and avoiding deadly risks. “I don’t expect it in bacteria or slugs,” Dr. van Schaik said. “But in these long-lived species that are social, you’re actually willing to give up what you know, drop that memory like a hot potato, because those in the other place do something else.”>>