The 500 Chats of Bartholomew Doum 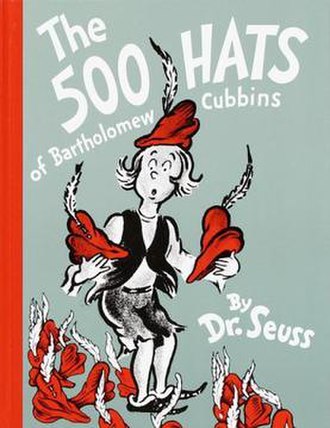 <<The 500 Hats of Bartholomew Cubbins is a children's book, written and illustrated by Theodor Geisel under the pen name Dr. Seuss and published by Vanguard Press in 1938. Unlike the majority of Geisel's books, it is written in prose rather than rhyming and metered verse. Geisel, who collected hats, got the idea for the story on a commuter train from New York to New England while he was sitting behind a businessman wearing a hat; the passenger was so stiff and formal that Geisel idly wondered what would happen if Geisel took his hat and threw it out the window. Geisel concluded that the man was so "stuffy" he would just grow a new one.

Set in feudal times, the story begins in the Kingdom of Didd, when King Derwin is riding through a street past peasant protagonist Bartholomew Cubbins. Ordered to remove his hat, according to the laws, Bartholomew does so, but another hat mysteriously appears; when he attempts to remove this one, yet another one appears; as this continues, the hats begin to grow in extravagance and beauty from the 451st hat onwards. Ultimately the 500th hat, studded with massive gems and gilding, leaves Bartholomew's head bare. Stunned by the beauty of the hat, King Derwin grants him reprieve and trades him 500 gold coins for the 500th hat.>>