Europa and Callisto under the watchful gaze of Jupiter (Jupiter)
http://photojournal.jpl.nasa.gov/catalog/PIA02861
NASA/JPL/University of Arizona 
The Space Between (Saturn)
Enceladus in the background and the smaller moon Janus in the fore
http://photojournal.jpl.nasa.gov/catalog/PIA12550
NASA/JPL/Space Science Institute 
Daphnis (Saturn)
Tiny moon Daphnis disrupts the rings it's between enough to make them cast shadows; the moon is the tiny white dot in the midst of the disruption.
http://photojournal.jpl.nasa.gov/catalog/PIA12622
NASA/JPL/Space Science Institute http://www.washingtonpost.com/wp-dyn/content/article/2010/05/06/AR2010050606284.html wrote:
BUCARAMANGA, COLOMBIA -- << Colombians have long known Antanas Mockus for his antics, such as the time he mooned an auditorium full of rowdy students during his stint as a university president. And how he got married atop an elephant. Then there were the occasions during his two terms as Bogota mayor when he donned a spandex suit and became Super Citizen to lecture residents about civics. Some have called him "a little strange," as Mockus acknowledged Thursday in an interview. Soon, Colombians may be calling him president.>>

http://en.wikipedia.org/wiki/Antanas_Mockus wrote:
<<Aurelijus Rutenis Antanas Mockus Šivickas (born 25 March 1952 in Bogotá), is a Colombian mathematician, philosopher, and politician. The son of Lithuanian immigrants, he left his post as the dean of the National University of Colombia in Bogotá in 1993, and later that year ran a successful campaign for mayor. He proceeded to preside over Bogotá as mayor for two terms, during which he became known for springing surprising and humorous initiatives upon the city's inhabitants. These tended to involve grand gestures, including local artists or personal appearances by the mayor himself — taking a shower in a commercial about conserving water. He is fluent in four languages: Spanish, English, French and Lithuanian.>>

Owlice,
Thanks for Mooning us My pleasure, and I see you give as good as you get, and with an action shot, no less!

The Daphnis pic got a WOW out of me (in big red letters); I don't know that I had seen those shadows -- from the waves of the little rock's travels -- before. I'd seen images of the disturbances that some of the little moons make in the rings, but not the shadows from those disturbances.

So many interesting moons! Moons which look like potatoes and sponges and translucent marbles, moons big, moons small, moons sulphurous, smooth, and rough. What a solar system!
A closed mouth gathers no foot.
Top

I like this images of Saturn's moons and the gravitational influenced turbulences of the rings. I would be glad to see such an image as an APOD!

This is a great post. Theres something creepy to me, about how the moon is moving above this post! Its kinda scary.

Paul.
"I'm so fast that last night I turned off the light switch in my hotel room and was in bed before the room was dark" Muhammad Ali, faster than the speed of light?
Top

wonderboy wrote:There's something creepy to me, about how the moon is moving above this post!

It's as if the right eye was processing the image before the left thereby making it 3D and convex.

However, it is still 3D and convex upside down (and, presumably, time reversed...I think).

So is that primarily because: AGAIN?! I thought I fixed that!

(Thanks for letting me know!

Emily Lakdawalla wrote: Just a pretty picture post, a dramatic Cassini shot on the outer edge of the A ring captured earlier this month. Cassini caught both Daphnis and Pan in one view, along with the cool wave structures that both make in the rings.

Cassini pointed at the outer edge of the A ring to take this photo on June 3, 2010. Although nearly an Earth year had passed since Saturn's equinox, the Sun is still at a low angle to the rings, so the waves at the edge of the Keeler gap excited by Daphnis are highlighted by their long shadows (lower right corner of the image). In the upper left, Pan appears within the Encke gap along with the faint ringlets that accompany Pan in its orbit. (NASA/JPL/SSI)

In the bottom-right corner, it looks as if Daphnis creates a disturbance ahead of itself as well as behind. Not the expected thing, since we naturally interpret this as wave action similar to a boat's wake. But of course gravity reaches forward as well as backward, so disturbing though it might appear, it makes sense.

BA: Zoom in on a HUGE lunar bullseye 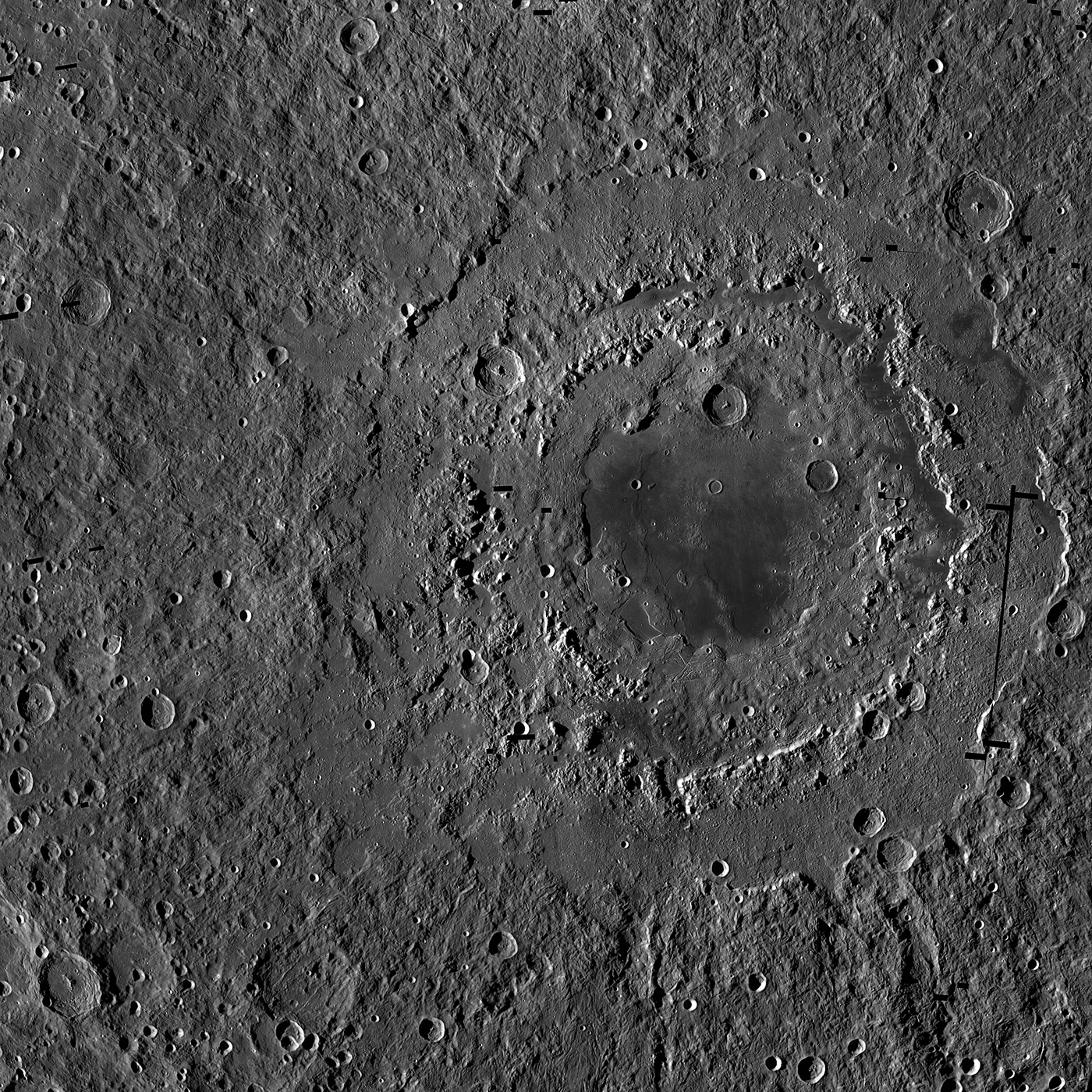 The Orientale basin is the youngest of the large lunar basins. The distinct outer ring is about 950 km from east-to-west, the full width of the LROC WAC mosaic is 1350 km [NASA/GSFC/University of Arizona].

If you’ve ever wanted to download a ginormous image of the Moon and explore it, now’s your chance: the Lunar Reconnaissance Orbiter Camera folks have released a monster 185 megapixel image of one of the biggest smackdowns on the Moon: Orientale Basin.

Orientale is a vast impact basin, the hole left by an asteroid that hit the Moon about three billion years ago. Looking like a humongous bulls-eye, it’s a multi-ring crater, and the outer ramparts are a full 950 km (590 miles) across. That’s half again bigger than my home state of Colorado.

To give you an idea of just how big this is — and also, to be honest, to scare myself a little — I superimposed the picture of Orientale on a map of the United States. This is to scale, folks:

Whatever hit the Moon to create this basin must have been about 100 kilometers (60 miles) across. That would have made it 1000 times the mass of the asteroid that wiped out the dinosaurs. If something like that hit the Earth today, there would be no life left on our planet. At all. Happily, nothing that big is headed our way.

Oh, but what a sight that must have been. An impact that size would release the energy of 100 billion one-megaton hydrogen bombs. It would have been visible across the solar system! Amazingly, though, such events were a little more common back then; the solar system used to be filled with monster asteroids itching for a fight. That period of bombardment ended billions of years ago, though. Yay.

The image from LROC is pretty amazing. It’s actually a mosaic of quite a few individual images from the Wide Angle Camera. The resolution is about 100 meters per pixel in the full image. If you don’t want to download that big picture, you can interactively zoom in on the basin on the LROC website. The black areas are where data are missing (or where the Moon is modest, perhaps).

You can see that Orientale is not like other craters. The event was so huge that it punched right into the Moon, like a fist through a styrofoam sheet, and the crater left behind got partially filled up with lava. That’s why there’s no obvious rim and bowl shape you usually see in smaller craters. The multiple rings are not fully understood — it’s rather hard to model an impact that releases the energy of a few billion nuclear bombs — though they are common in giant impacts. It may be that waves of energy blasting out from the impact event ripple through the ground like earthquakes, and where they rebound and interact you get those rings.

Since the original event, other, smaller impacts have dotted it, but again I refer you to the map of the US above to see what "smaller" means in this case! Some are bigger than cities and counties. Surrounding the inner part of the basin is terrain loaded with scarps (steep cliffs), gullies cut by flowing lava, and cracks caused by the shifting landscape. It’s really worth your time to simply scroll around the interactive map and see what’s there. And remember, at highest zoom each pixel is about the size of a football stadium.

Friday, June 18, 2010 was the first anniversary of the launch of LRO. Consider this image a fantastic present to us!

Re: BA: Zoom in on a HUGE lunar bullseye The surface of Saturn's moon Dione is rendered in crisp detail against a hazy, ghostly Titan.

A portion of the "wispy" terrain of Dione's trailing hemisphere can be seen on the right (see PIA12553: Wispy Marble). Also visible in this image are hints of atmospheric banding around Titan's north pole. To learn more about the northern bands, (see PIA08868: Bands of Titan and PIA08928: Northern Bands). This view looks toward the Saturn-facing hemisphere of Dione (1,123 kilometers, or 698 miles across) and Titan (5,150 kilometers, or 3,200 miles across).

Re: JPL: Dione and Ghostly Titan

What a great picture!!! Thank you for sharing it!!!
A closed mouth gathers no foot.
Top

June's Crescent Moon
http://www.galacticimages.com
Copyright: John Chumack
CrescentMoon061610_ChumackHRweb.jpg
You do not have the required permissions to view the files attached to this post.
A closed mouth gathers no foot.
Top The highly reflective surface of Saturn's moon Enceladus is almost completely illuminated in this Cassini spacecraft image taken at a low phase angle.

The phase angle, or Sun-Enceladus-spacecraft angle, for this view is 2 degrees. Enceladus is one of the most reflective bodies in the solar system because it is constantly coated by fresh, white ice particles. See Occulting Enceladus and Icy Enceladus to learn more.

This view looks toward the trailing hemisphere of Enceladus (504 kilometers, or 313 miles across). North on Enceladus is up. The view was acquired at a distance of approximately 423,000 kilometers (263,000 miles) from Enceladus. The image was taken in visible light with the Cassini spacecraft narrow-angle camera on Oct. 14, 2009. Image scale is 3 kilometers (2 miles) per pixel.

However it's spoken, it's a cool moon!
A closed mouth gathers no foot.
Top