Analemma observed in Taipei, Taiwan at 4:30PM local time
The video shows the path taken by the sun at 4:30pm throughout the year in Taipei, Taiwan. They were shot from September 22 2020 to September 23, 2021 from the same viewing platform on an eastern hill of Taipei. Due to heavy winter to spring rains and frequent summer afternoon thunderstorms, out of 46 trips only 30 images were usable, resulting in uneven gaps on the analemma. It is therefore also a document of the afternoon weather during the year!
The foreground is the city view of Taipei as seen at the location, with the tallest building being Taipei 101, a famous Taipei landmark.
https://drive.google.com/file/d/11hrTNN ... sp=sharing

A journey into Corona Australis 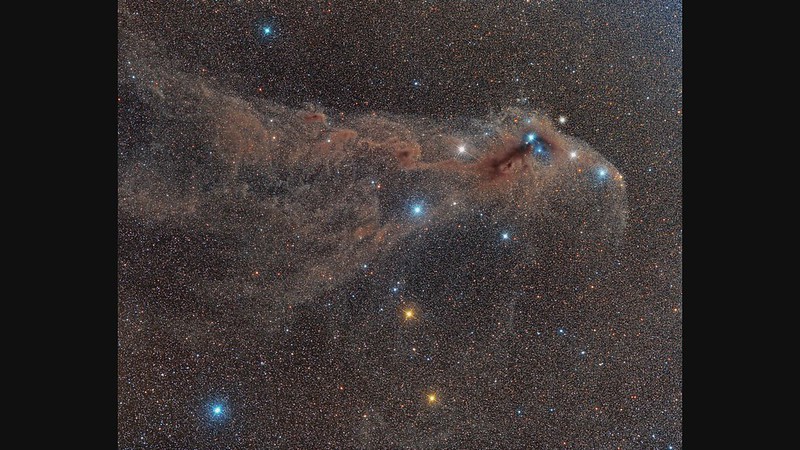 Jupiter animation made from the images made during the night of 14th october 2021 with great seeing in Paris !
3h20 - 74 images made, x2 with Winjupos derotation to create intermediate images, for a total of 147 images.

More intermediate images were created using AI video software to smooth the movement of the animation ; final number of images : 581.

The Sun in colour.
https://youtu.be/KE9XQBgczvo

The equipment used; spectroheliograph, mount and diffraction-limited imager comprising of a linear CCD array and Arduino controller, is self-designed and built. The controller is also able to position all optical components to their optimum positions for a specific wavelength via a remote link. Control, capture and raw image processing (destriping etc.) software is self-developed. GIMP was used to correct the geometry, set the tonality and colourise the images.

An omega moonset’s continuous change
The inferior mirage of celestial bodies rising or falling from the sea level is the most special and beautiful mirage. This is a special phenomenon that occurs when there is a low-density layer of hot air on the surface of the earth or ocean due to refraction. The most common one is the sun’s inferior mirage. The moon’s inferior mirage is not common because it is dark, but if you have the opportunity to see the moon’s inferior mirage, you can just use the terrain and potholes on the moon to confirm the mirage with inverted shape!
The weather was good on November 10th, and I was lucky enough to meet the rare inferior mirage of the sinking moon! When the moon is very close to the sea level, the inverted virtual image below will form and slowly rise and connect with the upright image above to form a rare sight like an Etruscan vase or Omega (Ω) shape !
This video includes the appearance of the lower mirage, the rising, and the connection with the upright image above, like an Etruscan vase. Then the bottleneck of the vase becomes thicker and shorter, and finally only a corner disappears on the sea surface.
Click to play embedded YouTube video.
Top

Click to play embedded YouTube video.
This animation shows the JWST's movement against the background stars on 6th Jan 2022 from 8:41am to 09:54am UTC while travelling just under 1 million kilometres away on its journey towards the Sun-Earth L2 point. JWST moved nearly 1000 kms further away from Earth during this observation and also appears to slowly fluctuate in magnitude from 14.0 to 15.8 - this is likely due to varying amounts of sunlight reflecting off its massive aluminised sun shield.
Interestingly the track appears slightly curved which matches the JWST ephemeris from Horizons: https://ssd.jpl.nasa.gov/horizons/app.html#/
The animation was made using 29 consecutive frames, each a 2 minute luminance exposure, and the colour was added by subsequently taking a separate RGB image of the same region and then overlaying this onto the animation frames.
Plate solving was done using PixInsight and photometric measurements with PlateSolve2.

2021 Sun Analemma in Taipei in the Morning and Afternoon
If you record the sun at the same place and time every day, you will find that the po-sition of the sun keeps changing. One year later, put all the suns in the same photo or make an animation in sequence, and you will see it draw a big figure of 8 in the sky exactly as the laws of physics tell us. This is really very exciting and moving! The tra-jectory of the sun in a year is called the sun analemma. The link to the video of the sun analemma in Taipei is as follows：
Click to play embedded YouTube video.
The sun analemma seen on the earth is basically like a figure of eight, and the two circles of the figure-8 are of different sizes. This is related to the eccentricity of the earth's orbit and the tilt of the earth's rotation axis. The degree of the figure-8 tilt in the sky is related to the latitude of the observer's location and the recorded time.
In 2021, I spent a whole year in Taipei recording the position of the sun at 7:30 am and 4:30 pm. In the northern hemisphere, the summer solstice of the sun analemma in the morning is at upper left, and the winter solstice at lower right. As for the sun analemma in the afternoon, the tilt direction is different from that in the morning. The summer solstice is at upper right, and the winter solstice at lower left. Whether it is in the morning or in the afternoon, sun analemma has a small circle above and a large circle below. It is also worth noting that the intersection of the figure-8 did not form at vernal equinox or at autumnal equinox. In addition, I recorded four days of sunrise and sunset tracks respectively in spring, summer, autumn and winter, and combined them with sun analemma. The degree of inclination of sunrise or sunset can be used to determine the latitude of the shooting location.
Due to heavy winter and spring rains and frequent summer afternoon thunder-storms, whether it is morning or afternoon, it is not easy to shoot the sun within a fixed period of time in Taipei. Some large gaps in sun analemma indicate that the sun did not show itself to be photographed for up to 20 days, and since sometimes the sun had to be photographed even when it was partially hidden in the clouds, several suns in the picture are not complete! Therefore, in addition to the trajectory of the sun in a year, the Taipei sun analemma can also be used to see the weather patterns in Taipei.
The landscape below sun analemma in the morning is the mountains in the south-east of Taipei. In fact, Taipei is a basin surrounded by mountains. The landscape be-low analemma in the afternoon is the downtown area of Taipei. Note that the tall building in the foreground is Taipei 101 (508 m), which used to be the tallest building in the world from December 1, 2004 to January 7, 2010.
Top
660 posts