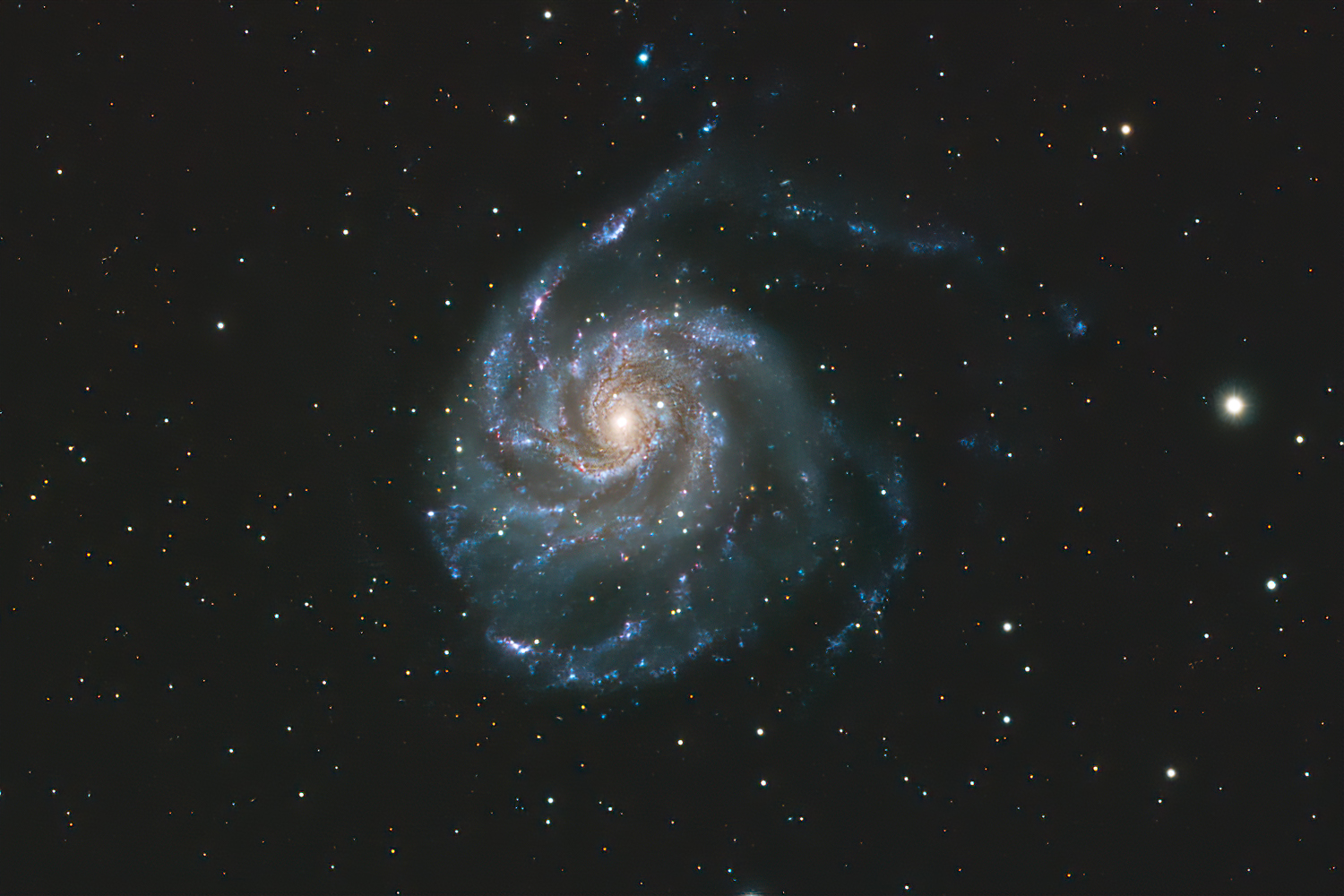 M35
Copyright: Filipe Alves
[attachment=0]M35finalwebzzzz.jpg[/attachment][/i]
You do not have the required permissions to view the files attached to this post.
A closed mouth gathers no foot.
Top

Startrails over TÜBİTAK National Observatory (TUG)
Copyright: M. Raşid Tuğral
apod.jpg
You do not have the required permissions to view the files attached to this post.
The Moon is set,
And the Pleiades.
Night's half gone,
Time's passing.
I sleep alone now. ”

The Shy Moon and the Seven Sisters
http://www.flickr.com/photos/danicaxete/
Copyright: Daniel Fernández
[attachment=2]moon pleiades.jpg[/attachment][/i]
You do not have the required permissions to view the files attached to this post.
A closed mouth gathers no foot.
Top

I'm fascinated by the picture of M109, NGC 3992. That blue star sitting right there in an inner spiral arm, displaying exactly the shade of blue that I expect from a type Ia supernova - could that be, indeed, a supernova? I checked out my "Color Atlas of Galaxies" by James D. Wray, from 1988, and the "supernova" was there in the same spot in M109 in Wray's UBG photo of the galaxy from 1979. So it is no supernova but a foreground star. Still, what an arresting picture!

The picture of M81 and Holmberg IX is unusually nice. It is an RGB image with displays an unusually rich palette of colors. The picture brings out, for example, how very blue Holmberg IX is compared with M81. The dwarf galaxy is very young and hence completely lacking in old yellow stars, but it is not "brand new" and therefore very deficient in red emission nebulae. However, some hints of purple can be seen in Holmberg IX, indicating, at least, the presence of very hot young stars still surrounded by gas.

Felipe Alvez image of M42 is beautifully detailed and richly and subtly colored. I think this may the first picture I have ever seen that brings out the color difference between the two brightest stars in the Running Man Nebula. The one on the left is an F0 star, with a color index of +0.269, and the one on the right is a more distant early B-type star with a color index of -0.183. That is a considerable difference in both spectral class and color index, and the two stars should display different colors, but this is the first time that I've ever seen the star on the left look yellower than the star on the right.

Felipe Alvez has also taken a very, very beautiful picture of M35 and NGC 2158. The starry richness of the picture is wonderful, the two star cluster stand out against the background very beautifully, and the difference between the two clusters - the youth and relative nearness of M35 and the much greater distance, much greater age and considerably greater richness of NGC 2158, is beautifully brought out.

I also love the Pleaides and Moon picture. I don't think I've ever seen a picture where the Pleiades were seen close to the horizon, just above some treetops, looking huge.

Hey Kwon, what was that streak of light from left to right across the screen about in the middle of the words -zodiacle light- appearing on the screen towards the end of video?
To find the Truth, you must go Beyond.
Top

I love those Pleiades pictures that bring out that mass of nebulosity!

And the Pleiades themselves seem to be glittering like gemstones here.

Ann wrote:I love those Pleiades pictures that bring out that mass of nebulosity!

And the Pleiades themselves seem to be glittering like gemstones here.

Thank you Ann! i really like the dimmer red-brown nebulosity surrounding M45 also. the dust was difficult to process, but it was a lot of fun.

Horsehead Nebula
http://www.pbase.com/wysinwyg/image/132485941
Copyright: Mark Wielgosz
[attachment=0]horsehead.jpg[/attachment][/i]
You do not have the required permissions to view the files attached to this post.
A closed mouth gathers no foot.
Top

Northern Lights over Norway
http://www.loscielosdetenerife.es
Copyright: Carlos Vázquez
[attachment=0]Aurora.jpg[/attachment][/i]
You do not have the required permissions to view the files attached to this post.
A closed mouth gathers no foot.
Top

Orion and Sirius over the Allalin
http://www.flickr.com/photos/jmbillings/
Copyright: James Billings I love "Starry Night over Mt Kilimandjaro" by Kwon and O Chul !

Here are two pictures.
Have a very nice day!

Céline
You do not have the required permissions to view the files attached to this post.
"The cure for all the sickness and mistakes, for all the concerns and the sorrow and the crimes of the humanity, lies in the word "Love". It is the divine vitality which from everywhere makes and restores the life". Lydia Maria Child
Top

On this Photo I compiled a set of approaximately a span of five weeks of observations of the the Ring Planet Saturn and its interesting current rare event the NED Storm in which is still going strong and extending through out the northern pole region.