The "Super Moon to Super Moon" graphic has been a side project that I have been working on for the past fourteen months.

At approximately each full moon (plus or minus a day because of weather) I photographed the moon using an identical set up as to photograph the true size of the lunar disc. Equipment was a Canon EOS t2i and a Sigma 70 to 300 mm lens at 300 mm. Exposures were 1/500 to 1/1250 a second according to cloud cover, transparency, etc. (f/5.6 was used throughout the entire project) The first lunar disc was photographed during the "Super Moon" of 2011. At the time this photo was taken the moon was 356816 km from Earth. On October 11, 2011 the lunar disc reached its minimum size as the lunar distance was 406417 km. Fourteen months after the 2011 "Super Moon" the 2012 Super moon was photographed at a lunar distance of 356959 km.

I am very thankful to live in the desert southwest of the United States during the completion of this project. I only encountered one night of significant cloud cover on the August 13, 2011 full moon. This could cover is typical during the summer monsoon season in Arizona. Fortunately the cover was light enabling a photograph of the lunar disc. If anyone is interested in a similar photo project my advice is to watch the focus ring on the zoom lens carefully! During the November 10 exposure the zoom ring slipped from 300 mm to 270 mm. I was doing the post-processing and nothing was making sense, I realized that the photos on this day were shot at 270 mm and were able to crop them to equal the size of the lunar disc that would be produced at 300 mm. All other full moon apparitions were without complications!

Hi Marion,
it's fun to see your comment about the very clear weather in your desert area. Unlike you, I'm living in Brittany (the Western tip of France) where the weather is very changing (like in Ireland or Scotland). Despite that bad weather, I was able to capture it 22 times during 24 consecutive (almost) Full Moon, but friends gave me the 2 missing Full Moon (those of February). 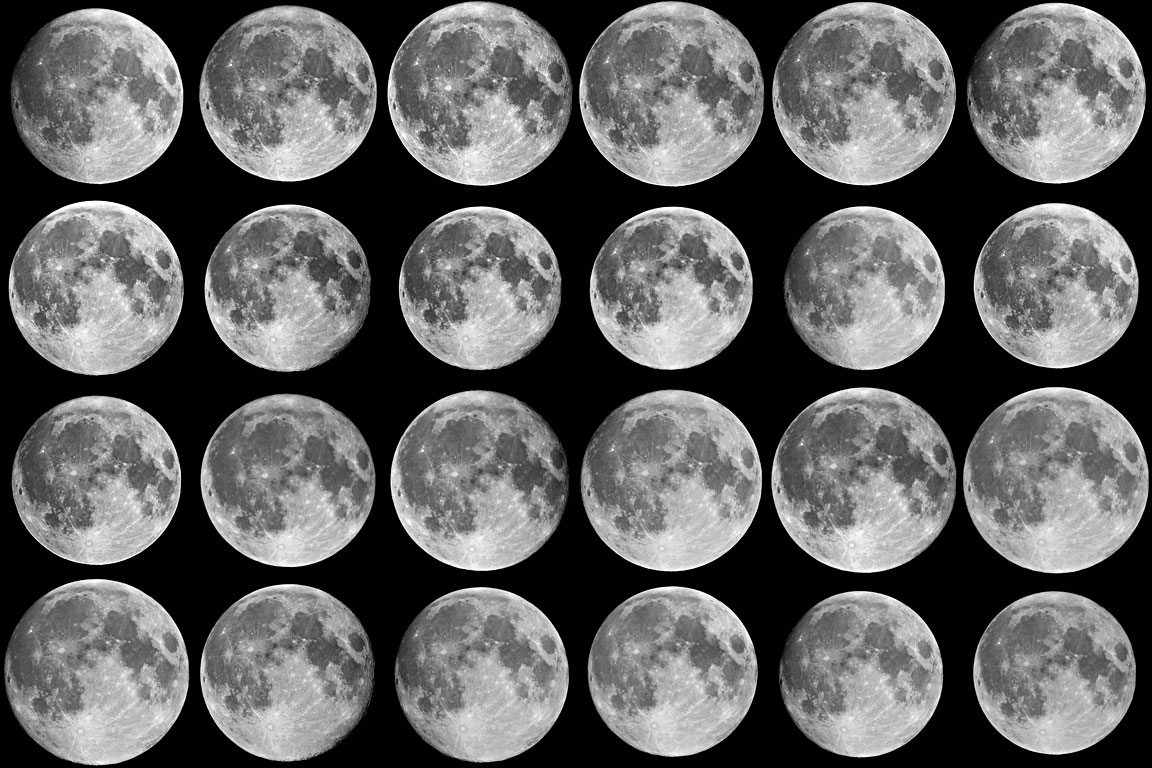 Thank you for your kind comments. It is very interesting to see a two-year composite of the full moon from your location. Since taking the photographs, my family and I have moved to Pennsylvania. We are farther from the coast than Brittany however I no longer have 300+ days of sunshine and a clear sky virtually every night! I enjoyed the link to the animation that you provided. I am working on a composite image of Vesta and Jupiter moving through Taurus. I must cherish every clear night, photograph between clouds and be flexible at my new location. On a positive note I am no longer dealing with the excessive hot pixels that occur when photographing when it is 100 degrees at 10pm! (When it is 15 degrees out, noise is not much of a problem)