This image snapped by the NASA/ESA Hubble Space Telescope reveals an exquisitely detailed view of part of the disc of the spiral galaxy NGC 4565. This bright galaxy is one of the most famous examples of an edge-on spiral galaxy, oriented perpendicularly to our line of sight so that we see right into its luminous disc. NGC 4565 has been nicknamed the Needle Galaxy because, when seen in full, it appears as a very narrow streak of light on the sky.

The edgewise view into the Needle Galaxy shown here looks very similar to the view we have from our Solar System into the core of the Milky Way. In both cases ribbons of dust block some of the light coming from the galactic disc. To the lower right, the dust stands in even starker contrast against the copious yellow light from the star-filled central regions. NGC 4565’s core is off camera to the lower right. For a full view of NGC 4565 for comparison’s sake, see this wider field of view from ESO’s Very Large Telescope.

Studying galaxies like NGC 4565 helps astronomers learn more about our home, the Milky Way. At a distance of only about 40 million light-years, NGC 4565 is relatively close by, and being seen edge-on makes it a particularly useful object for comparative study. As spiral galaxies go, NGC 4565 is a whopper — about a third as big again as the Milky Way.

The image was taken with Hubble’s Advanced Camera for Surveys and has a field of view of approximately 3.4 by 3.4 arcminutes.


<< Previous ESA/HEIC POTW
Know the quiet place within your heart and touch the rainbow of possibility; be
alive to the gentle breeze of communication, and please stop being such a jerk. — Garrison Keillor
Top

Photo: ESO VLT FORS
I have often wondered about NGC 4565. In older photos it often looked perfectly yellow, as in this ESO image. And not only was it yellow, but it looked "calm", "straight" and "undisturbed", too.


Is nothing going on inside this galaxy? Does it contain no young stars? 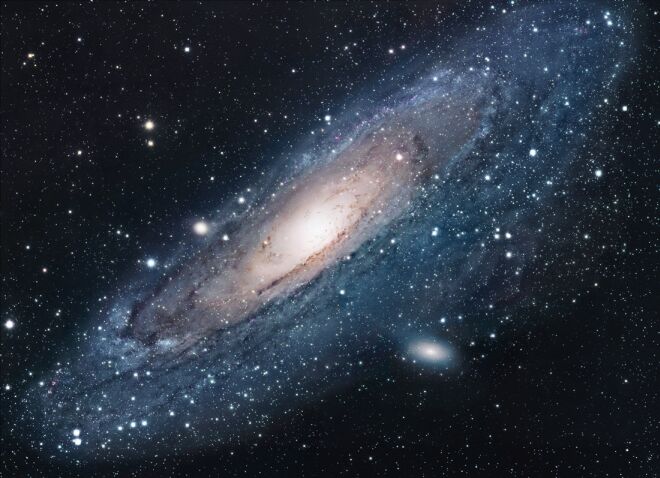 So it is obvious that NGC 4565 must contain more blue stars than what could be seen in older photos. The HEIC image does reveal what is obviously several young clusters.

Of course, if the HEIC image had been made from exposures through three different filters it would have revealed even more about the stellar populations in NGC 4565. Than again, by photographing many objects through only two filters ESA/HEIC saves time, and can create images of more celestial objects.

Photo: Bob Franke
By the way, and for comparison... I can't resist showing you a picture of NGC 4631, an edge-on galaxy brimming with star formation which flaunts its magnificent clusters any way you photograph it.

ha-ha, to me, it looks like a blue whale with pink spots. Looksa nice!

ha-ha, to me, it looks like a blue whale with pink spots. Looksa nice!

And waddaya think this galaxy is called?

With the orange area in the middle, i think it might be a little more correct to call it -The saddle back Whale Galaxy. YEE-HAA!

Why is that?
Chris

It used to be easier. Considering what color pictures of galaxies used to look like eight years ago or so, it is clear that faint blue clusters and associations were hard to photograph. Or maybe it wasn't so hard to photograph them, but perhaps it just wasn't fashionable to emphasize faint populations of galaxies back then - maybe astrophotographers just liked to give a reasonable portrait of the brightness distribution of galaxies back then! Maybe astrophotographers weren't interested in bringing out a lot of faint detail in galaxies back then, or maybe they just couldn't. And because the apparent luminosity of the M31 clusters is higher than the apparent brightness of the NGC 4565 clusters, it's not surprising that blue stars in M31 showed up in pictures at a time when contemporary images of NGC 4565 turned that galaxy's blue stars into no-shows.

I'm the owner of a book from 1988, The Color Atlas of Galaxies by James D Wray. Wray shows the NGC 206 area in the Andromeda and shows it to be full of ultraviolet-bright stars (his atlas portrays the galaxies in UBV). However, NGC 4565 is "relentlessly yellow" in Wray's atlas, as if it contained no ultraviolet or even blue stars at all.

Bruce Hugo and Leslie Gaul/Adam Block/NOAO/AURA/NSF
The ESO picture from 2002 that I showed in my previous post similarly shows NGC 4565 as "perfectly yellow". And this NOAO image from 2004 also depicts NGC 4565 as basically all yellow.

I believe that "RGB astrophotographers" nowadays take pains to bring out the blue populations of predominantly yellow galaxies. It could be that the CCD devices have become more sensitive to blue light now than they were during the first years of the 21st century.

My guess is that it was relatively easy to photograph (the faint) blue populations of M31 with blue-insensitive equipment, for the simple reason that galaxy is so nearby. (Alternatively, some blue stars were seen in M31 because their nearness made them bright enough to show up in pictures that didn't specifically try to bring out the faint outer parts of Andromeda.)

NGC 4565, on the other hand, looked all yellow because it's much farther away than M31 and because its clusters are comparatively small and faint. But so are, for the most part, the clusters of M31. If M31 had been as far away as NGC 4565, then James D Wray's atlas would almost certainly have shown it to be all yellow. Similarly, if ESO had portrayed a circa 50 million-light-year-distant Andromeda galaxy in 2002, Andromeda would have looked as yellow as NGC 4565 does in the ESO picture from that year.

Thanks for your thoughts... but I think I wasn't clear. I was wondering why being closer should make any difference? (Obviously if an object is too far away to really resolve, or if redshift is visible, I'd understand that. But neither applies to NGC 4565 or M31... so I was looking for some clarification.)
Chris

N.A.Sharp/NOAO/AURA/NSF
It could be, too, that it has become easier to "bring down" the "brightness difference" over the face of a galaxy.

Take a look at this picture of M100. It is very obvious that the center of this galaxy is very bright, and very much brighter than the rest of the galaxy.

Compare N.A. Sharp's picture of M100 with a picture of the same galaxy by Adam Block. Adam Block has "toned down" the brightness differences over the face of M100. That way he can show us the general color of various parts of the galaxy, without worrying about how bright or faint the different parts are.

Interestingly, both these images are color pictures. In the case of M100, its "blue parts" tend to stand out, which is why the galaxy looks generally grayish-blue in N.A. Sharp's "almost colorless" color picture.

In James D Wray's atlas, the surface brightness of much of M100 is so low that it is basically just the blue parts of the galaxy that show up! The yellow nucleus, on the other hand, is so bright that its color is burned out!

I believe that astrophotographers are much more interested in bringing out faint details in galaxies than they used to be. (Or maybe they are just more able to do it.) And faint details can look very interesting if their color is emphasized.

For the CCDs used by amateurs, both are true. But neither has really impacted the color of images. I suspect it has more to do with the choice of filters, and the types of processing used.

I still don't understand your reference to distance, though.
Chris

So if a relatively distant galaxy (distant compared with M31) like NGC 4565 has small, rather faint, scattered clusters, then a given set of equipment may not see those clusters. The same equipment will see similar clusters in M31, because they appear larger and brighter in the sky.

Of course you are right that the choice of filters and processing is critical. I always thought that HST "diminished" the arms of M81 in this 2007 image, even though it is a three-color picture where a blue filter has been used, along with a clear and an infrared one. Compare the Hubble image with this Giovanni Benintende picture of M81 from a year earlier.

The point I've been trying to make is that it's only lately that I have seen pictures of NGC 4565 that clearly bring out a blue population in that galaxy. Admittedly the ESO image that I have been referring to earlier does show a blue population in NGC 4565, at least if you look at the picture at ESO's own site and if you look at a moderately high resolution of the picture, like this one. Interestingly, in spite of the fact that the filters used for the ESO image were B, V, R and I, no red emission nebulae are seen. I have to keep insisting that the ESO image makes NGC 4565 look like a very yellow and quite non-blue galaxy to me. Fascinatingly, this Hubble image of "dusty elliptical" NGC 1316 looks less yellow than the ESO picture of NGC 4565. The filters used for NGC 1316 were B, V and I, the same as for the Hubble picture of M81.

The B-V index for NGC 1316 is +0.89. That's red, but not absolutely relentlessly so. Combined with a U-B index of +0.39, it suggests that there is an enhanced population of at least intermediate stars in NGC 1316 - well, enhanced compared with other ellipticals. And the color indexes of NGC 1316 are bluer than the the ones of M31, which are +0.92 and +0.50! I have to wonder if those very red M31 color indexes take the blue population of that galaxy into account, or if they just describe the population of the large bulge of M31.

And M81 is even redder than M31, at least when it comes to its color index. I have no information about the U-B index of M81, but its B-V index is +0.95 - that is almost ridiculously red for a spiral galaxy with blue arms and emission nebulae! I guess Hubble was telling the truth about M81 after all - it's a very yellow galaxy, with a very large, bright yellow bulge and and elegant and starforming but faint and short arms.