Lunar Jupiter Conjunction of January 21 2012 by Radical Retinoscopy, on Flickr Lunar Jupiter Conjunction of January 21 2012 with the Jovian Moons Visible by Radical Retinoscopy, on Flickr


The conjunction of the moon and Jupiter was photographed on January 21, 2012 using a Canon t2i with a Canon 100 mm f/2.0 lens. If you look closely; two of Jupiter's Jovian moons are visible. This cold evening was mostly cloudy, i was fortunate to experience a few clear spots to photograph the celestial pairing.
Top


IC 1396
Copyright: Robert Fields
[attachment=2]IC 1396.jpg[/attachment]
You do not have the required permissions to view the files attached to this post.
Top NGC281-SHORGB-16012013-P1.jpg
Full size image can be viewed here
You do not have the required permissions to view the files attached to this post.
Top

IC 447/2169 is a reflection nebula but … it has an identity crisis. The NGC project - now back on line at a new URL, http://www.ngcicproject.org/, under new ownership but same content by Dr. Robert E. Erdmann, Jr. - has this to say about the nebula and the nearby reflection nebula (half degree north of it) reflection nebula (IC-446/IC-2167) I haven't as yet imaged. They, though, are connected by a dark nebula:

"The same two objects [IC-446/IC-2167, and IC-447/IC-2169] were apparently discovered twice by Barnard... Neither of Barnard's positions is particularly good, though we can get close to the apparent center of his large, diffused nebulosity if we adopt his RA for IC 447 and his Dec for IC 2169. Even though his two positions are more than 10 arcmin apart, they clearly refer to the same object: it is big (I make it about 30 x 30 arcmin on the DSS). Barnard notes "several stars 9-10 involved"; those stars are indeed there."

Barnard never realized they were the same object. Though in a later publication he did retract his discovery of IC 447 saying it was a duplicate of NGC 2245 -- the cone nebula. Which, of course is incorrect. He did though send the data on both to Dreyer who did publish it in his second IC catalog without apparent verification and likely accepted Barnard's description without viewing it himself. So even the most careful of visual astronomer's, and Barnard is considered one of the best, did make mistakes that the later photographic era would have prevented. Or maybe not considering the SH2-235 problems.

IC 447/2169 (it is also known as Dreyer's Nebula) is located in Monoceros, the unicorn. So obviously another that has been waiting on the hard drive for some time. It is thought to be part of the huge cloud of dust and gas that includes the far more famous emission and dark nebula known as the Cone Nebula as well as the Christmas Tree open star cluster and the Fox Fur Nebula. If so it is about 2700 light years distant, considerably further away than the nearby Orion Nebula complex.

Being a reflection nebula it is a blue color. The color comes from scattered star light of the illuminating stars which are either in or behind it. The nebula is blue for the same reason our sky is blue. The tiny molecules of dust and gas scatter blue light better than the other colors due to its short wavelength. It matters little what color the illuminating stars are, as long as they emit some blue light the nebula was take on a blue color same as the somewhat yellow sun still results in our blue sky. (ref.: http://cosmoquest.org/forum/showthread. ... ion-nebula)
Last edited by Harel_Boren on Thu Jan 24, 2013 8:53 am, edited 1 time in total.
Top

here is my latest h-alpha-sundrawing from 23.01.2013. I send you the positiv and the negativ
version of my drawing.

I use a drawing pattern with lightgray sun. I draw the prominences, sunspots and
filaments with graphite pencil. For the active regions and flares i use the knife to
scrape the gray color off. On this away I can hold finest details.

You can find more of my sundrawings on my website: http://www.dersonnenzeichner.de

this is my first submission for APOD 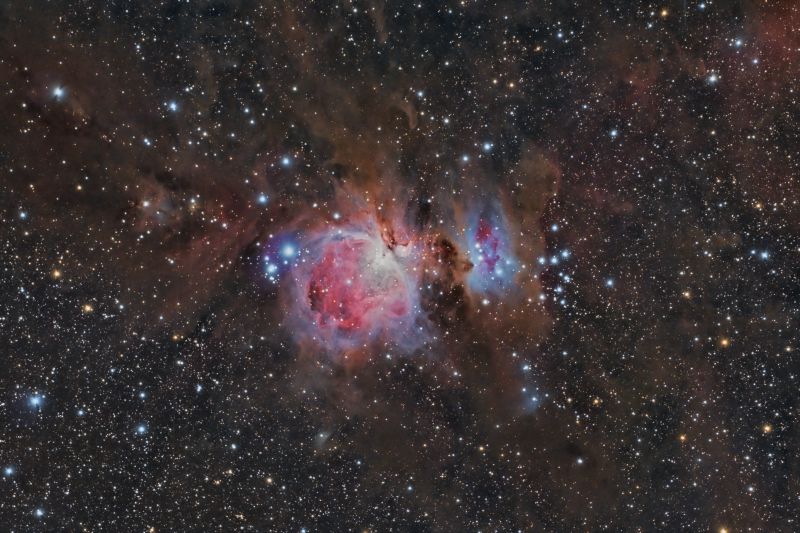 http://www.astrosurf.com/comolli/d140m.jpg
Details and tech data: http://www.astrosurf.com/comolli/d140.htm
You do not have the required permissions to view the files attached to this post.
Last edited by owlice on Sun Jan 27, 2013 10:05 am, edited 2 times in total.
Reason: Attached smaller image for faster downloading; left link to larger image. Please keep images under 400K. Thanks for sharing!
Top

International Space Station traces a long streak through frame. In the foreground ruins of a medieval tower. Location perfecture of Kavala, Greece (40.740372,24.144602) Geminids were captured on December 14, 2012, from EABA (Bosque Alegre, Cordoba, Argentina) over a 3-hour period aprox, with on tripod camera. The brighter trail is Jupiter path.
We were lucky to register a geminid on the main Newtonian telescope at Bosque Alegre complex, while we were capturing Barnard 33 in Ha, same night. The B&W image is a 5-min single capture made with a CCD mono. Two different intensities of the light path of the meteorid can be distinguished, before and after its explosion right over horsehead. Bioluminescence in the Gippsland Lakes

Bioluminescence in the Gippsland Lakes 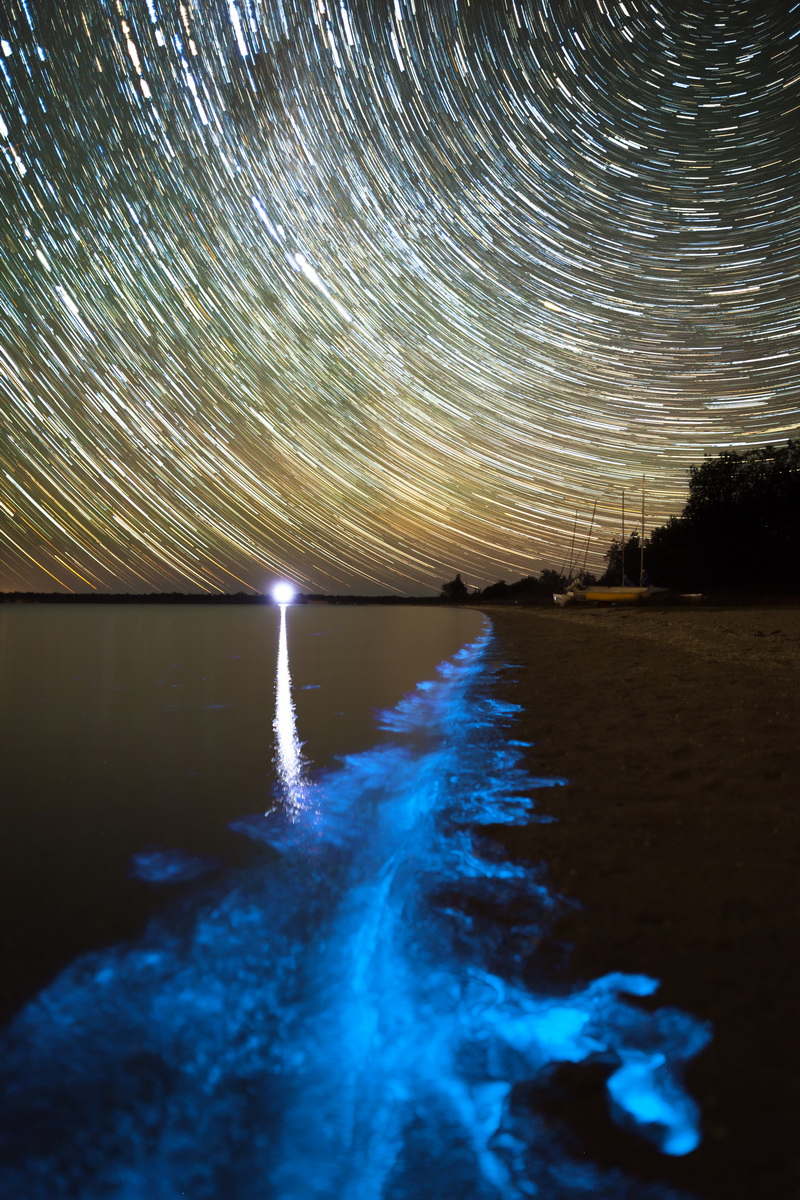 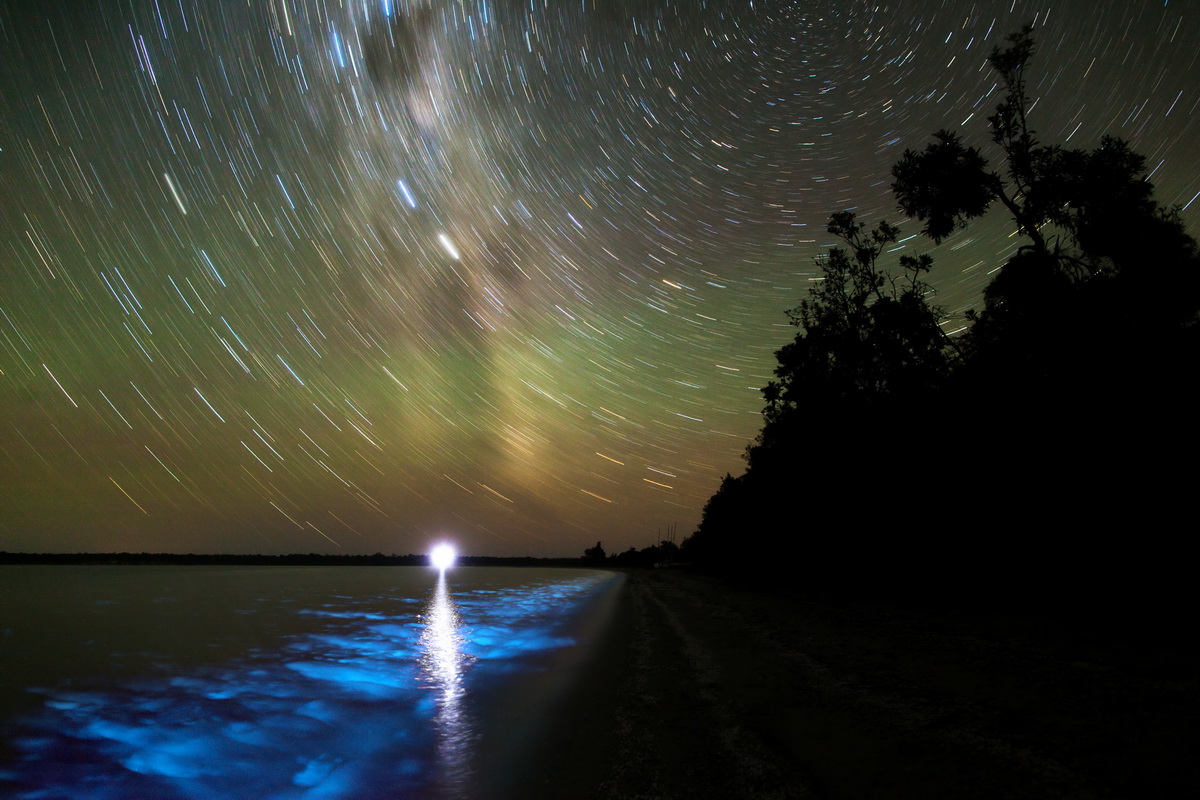 I love the convergence of the Milky Way and the stream of glowing algae in this photo!
Just call me "geck" because "zilla" is like a last name.
Top

The Grand Bénare, the third highest peak of Réunion Island (2900m) emerges from the mist under the Milky Way and the Carina Nebula
Top

Very few people in Europe has seen the elusive and sublime Zodiacal Light, as it requires pristine skies to be watched. Unfortunately, any neon ad can be brighter than a million worlds in the sky. However, in the Montsec it can still be admired.
Last edited by frikosal on Fri Jan 25, 2013 6:05 pm, edited 1 time in total.
Top

LDN 6122 in The Phantom Nebula in Orion. Image by Peter Shah
http://www.astropix.co.uk/ps/pages/a0953.htm
You do not have the required permissions to view the files attached to this post.
Last edited by owlice on Sun Jan 27, 2013 10:09 am, edited 3 times in total.
Reason: Attached smaller image for faster downloading; left link to larger image. Please keep images under 400K. Thanks for sharing!
Top

NGC 869 and NGC 884 are Double Cluster in Perseus sometimes designated χ Persei and h Persei. The two clusters are separated by only a few hundred light years and probably form the core of the immense stellar association Perseus OB1. Both clusters are relatively young: NGC 884 is 3.2 million years old, and NGC 869 is 5.6 million years old. There are more than 300 blue-white super-giant stars withing both clusters, and these two clusters are also blueshifted meaning they are heading towards Earth at a speed of 22km/s. A few red supergiants are seen at considerable projected distances from the double cluster and may either belong to the background Perseus OB1 association or alternatively could represent massive stars previously ejected from the dense clusters.