[c]«« Discuss Anything in Astronomy «» Visit The Asterisk Main Page «» See Introductory Astonomy Lectures »»
«« Introduce Yourself «» Please Read the Rules »»[/c]
On July 4th 1054 AD, astrologers observed a bright blue square in the sky near the sun at dawn. it was visible during the day for 3 weeks and at night for 2 years. 700 years later, the Crab Nebula became the first object in Charles Messier's famous catalog:

What makes the crab nebula glow? The bluer of the two central stars is a dense neutron star,
the remnant of the original star compressed so tightly that separate protons and electrons cannot exist. Due to the conservation of angular momentum the tiny neutron star is spinning at 30 revolutions per second. A strong magnetic field associated with the spinning star
accelerates electrons in the surrounding space to relativistic speeds ~half the speed of light!
Collisions between the electrons and surrounding gas give off very high energy photons. Rather than the central star, it is the photons from these collisions that cause the surrounding filaments to glow like fluorescent lights.

EDIT: be sure to hover over the image with mouse to see the pulsar wind, imaged with a special filter to eliminate the narrow band emissions, or see blink below.

thank you for your consideration
-bill warden

This weekend I labored through a brutal 18 mile trek over steep terrain, post holing through slippery snow fields, trudging into mosquito infested hatchery’s, while packing a full set of camera and camping equipment. However, I can honestly say this astonishing view was worth every step. I was blessed with clear skies during the first few hours of the night, in addition to the aurora borealis making a glowing appearance. In this panoramic image, you can spot each of the seven peaks making up a portion of the Cascade Range. From left to right: Broken Top, South Sister (Charity), Middle Sister (Hope), North Sister (Faith), Mount Washington, Three Fingered Jack, and Mount Jefferson. R136 Region of the Tarantula Nebula (also known as 30 Doradus, or NGC 2070), an H II region in the Large Magellanic Cloud (LMC). Compact star cluster R136 (approximate diameter 35 light years) produces most of the energy that makes the nebula visible.-Wiki

M20---
20 subs (CPC 925 and 60Da, 90sec@ISO3200) taken on the 1st July 2013 in Perth, Western Australia, in almost "perfect" winter conditions: extremely good visibility caused by low humidity and <1km/h dry north-easterly wind ...Higer res @
http://westcoastpics23.blogspot.com.au/?view=flipcard
You do not have the required permissions to view the files attached to this post.
Top

Cygnus
http://fth.bounceme.net/
Here’s a mega-sized image of the constellation Cygnus (The Swan). This is a 9 panel mosaic spanning a field of view of 30x21 degrees.
Copyright: Fred Herrmann All rights reserved.

Click to play embedded YouTube video.
Caption: The ultra-high resolution images captured by NASA’s Hi-C
instrument (High-resolution Coronal Imager) have uncovered an amazing
amount of detail within the hot outer atmosphere of the Sun (the
corona).
Movie top right: “blobs” of electrified gas (plasma) racing along
magnetic highways at strands with material moving along them at up to
80 km/s.
Movie bottom left: solar “sparkles” switching off and on in under 30
seconds, releasing energy into the solar corona.

Caption: An image of an active, magnetically complicated region of the
Sun captured by the new Hi-C instrument. It shows plasma in the outer
solar atmosphere at a temperature of 1-2 million degrees Celsius. The
inset box at bottom left shows ‘sparkle’ features that are releasing
vast amounts of energy into the corona. The box at top right shows a
close-up of part of a solar filament where ‘blobs’ of solar plasma
flow along thread-like ‘highway’ structures. Credits: NASA MSFC and
UCLan. Caption: after a pretty lame June aurora wise, they finally picking up again
and when I was out a few hours ago there was a super bright meteor,
definitely the best one I saw in my 9 years down here. We don't get as
many here at the Pole since we kind of look out of the "side window"
The exposure time was only 5 sec for the left and 8 sec for the right
image so I had to stack two images in both cases. (ISO 6400 for both
pictures) on the fisheye image you can see the second camera in the
foreground which produced the left image. Caption: a fascinating bit of the Vela Supernova Remnant, one of the best examples of the
aftermath of a supernova explosion. Pictured here is a delicate wisp
in the southern part of the remnant never imaged.

I used narrowband filters Ha and OIII to enhance the visibility of
this faint nebula on a RGB base totaling over 11 hours of exposure.

Caption: I took a series of photos just below the summit of Mount Evans in
Colorado last Friday evening, where the Mount Evans Meyer-Womble
Observatory sits at over 14,000 feet. I caught dozens of images of an
exciting lightning storm filling the sky over the observatory, one of
which I wanted to submit for consideration of use on APOD. Caption: I’m a fairly keen amateur astrophotographer and normally use an
expensive array of CCDs, autoguided mounts and telescopes to take
pictures that are nearly, but not quite as good as those you publish.
Last Saturday I was parked out in the country, with only a DSLR, a
tripod and a lightweight tracking device and took this picture
directly overhead. It reminded me of what got me interested in the sky
in the first place as a child in a small country town in the 1907s;
just seeing the milky way arcing overhead with the naked eye.

After taking a few pictures of the setting full Moon over Assos on
23rd June, I waited for 3 days for the bright Moon to depart the early
evening hours to shoot a few more photos in more familiar conditions.
In the evening of 25th June, there would be a dark sky window of about
half an hour, between the fading twilight and rising Moon. I want to
submit these four pictures of the sky as seen from Assos for APOD.

Assos is located on a about 70 km south of Çanakkale in NW Turkey.
Archaeological grounds and especially Athena Temple overlook Aegean
Sea from a promontory 200 m above sea level. This is also very close
to the westernmost tip of mainland Turkey and the whole continent of
Asia as well: This picture is wide view of the western sky
from Athena Temple, as the twilight faded. Venus, Pollux and Castor,
forming a straight line, were about to set, Cancer and Leo soon to
follow. I photographed this southern panorama of the bulge of
the Milky Way rising above Athena Temple during the short window of
dark sky. Southern constellations of Lupus and Centaurus are soon to
depart the sky, while wide pairing of Saturn and Spica were high in
the southwest. This is a few minutes after moonrise, with some Milky
Way still remaining visible. The perigee full Moon of 22-23 June is
now fainter. It is also way smaller, as I did not use a telephoto
lens, but a wide angle one. Then I left the grounds, drove to lower elevations
to check out the theatre. The Moon was higher and shining bright,
providing natural lighting to the theathe as it did for the last 24
centuries. Caption: Here is globular cluster NGC 6752 in Pavo captured in colour on July
2nd from Siding Spring. The third brightest globular in the sky behind
Omega Cen and 47 Tuc. You really don't see many images of it which is
surprising really as its certainly a beautiful cluster in its own
right. NGC 3603 is an open cluster of stars situated in the Carina spiral arm of the Milky Way around 20,000 light-years away from the Solar System. It is surrounded by the most massive visible cloud of glowing gas and plasma known as a H II region in the Milky Way. HD 97950 is the central star of star cluster, the densest concentration of very massive stars known in the galaxy. Strong ultraviolet radiation and stellar winds have cleared the gas and dust, giving an unobscured view of the cluster. -Wiki

The first time I heard of this object was the
book of Stephen James O'Meara - The Messier Objects. (Sky Publ. Corp.,
Cambridge Univ. Press. 1998.). The writer describe that there is a
strange object group in Scorpius constellation which looks as if
beautiful and bright comet streaks across the southern sky. I just came
back from Namibia and that was true: it was
perceptible to the naked eye very clearly! And it is bewilderingly looks
like a real comet. NGC6231 is the head and the other objects (mainly the
IC4628) give the tail. Maybe it is not so impulsive as
the famous southern bright nebulas but I think it is real interesting.

A sun pillar over Catalonia

I was surprised last June 29 to encounter a sun pillar when I was walking near a budism monestry in Catalonia (Spain), and immediately took these pictures.

Thank you so much, Stephen, you know I just love that image!!!

And thanks to everyone else here who have posted images. Keep 'em coming! 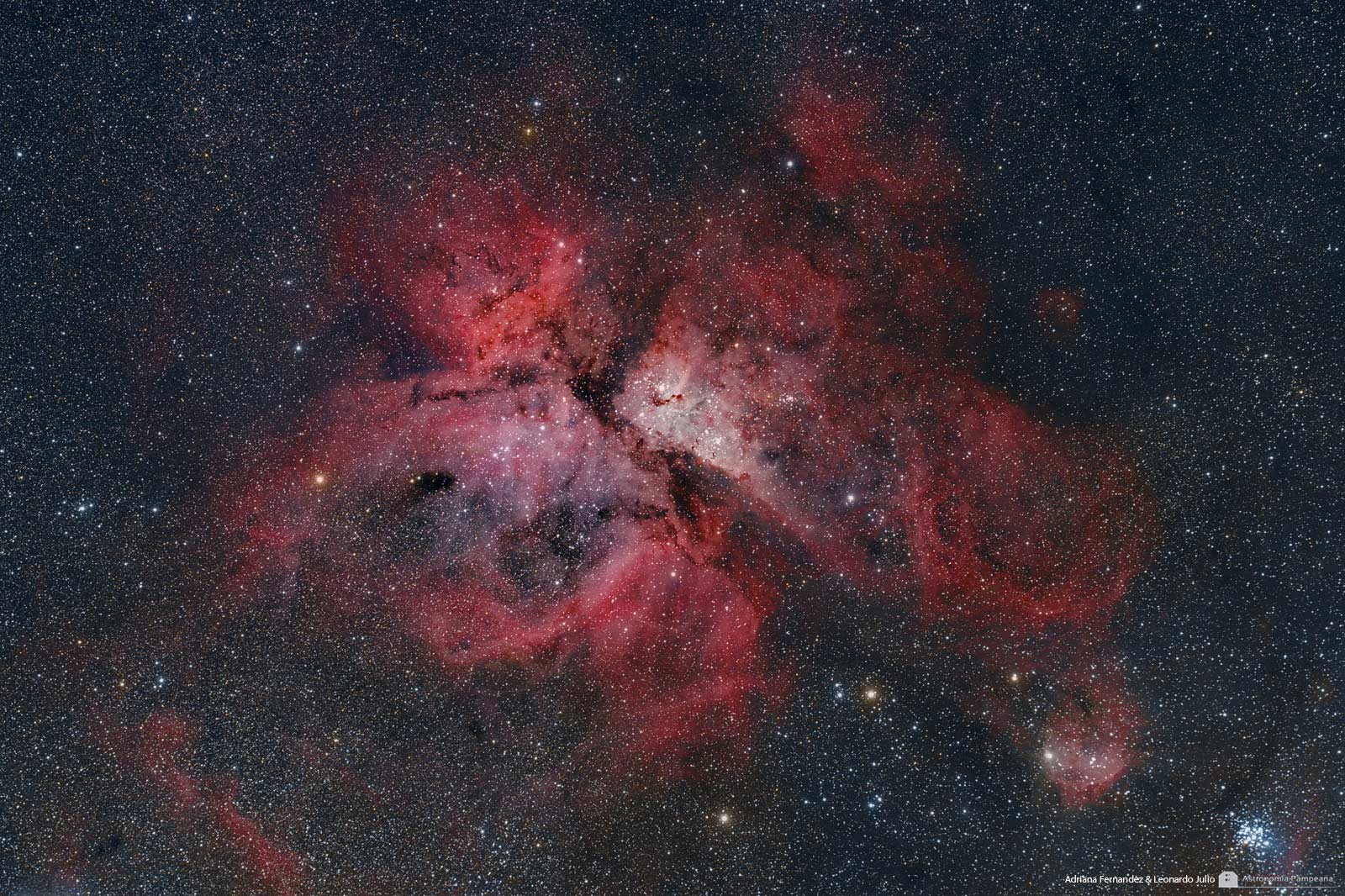 A narrowband image of M8 (The Lagoon Nebula)

M20 (Diffuse Nebula)
Copyrights: Ian Polczynski from Perth, Australia
You do not have the required permissions to view the files attached to this post.
https://www.facebook.com/AstronomyRules
Top

A Boeing 737 of Air France seen departing London-Heathrow, whilst a Boeing 757 of British Airways flies overhead...both against the backdrop of a half moon.
Copyright: Bob Holder
You do not have the required permissions to view the files attached to this post.
https://www.facebook.com/AstronomyRules
Top

51 hours went into the acquisition of this object, vdB142, part of the IC1396 copmlex. The image was composited as a Modified Hubble Palette, using Hydrogen Alpha, Sulphur II and Oxygen III filters.

The image was collected during the last two weeks of June, totalling 102 sub-frames, 1800 seconds each. The Wolf SL17
Copyright: Paul Haese
Click herefor the larger image.
You do not have the required permissions to view the files attached to this post.
Top