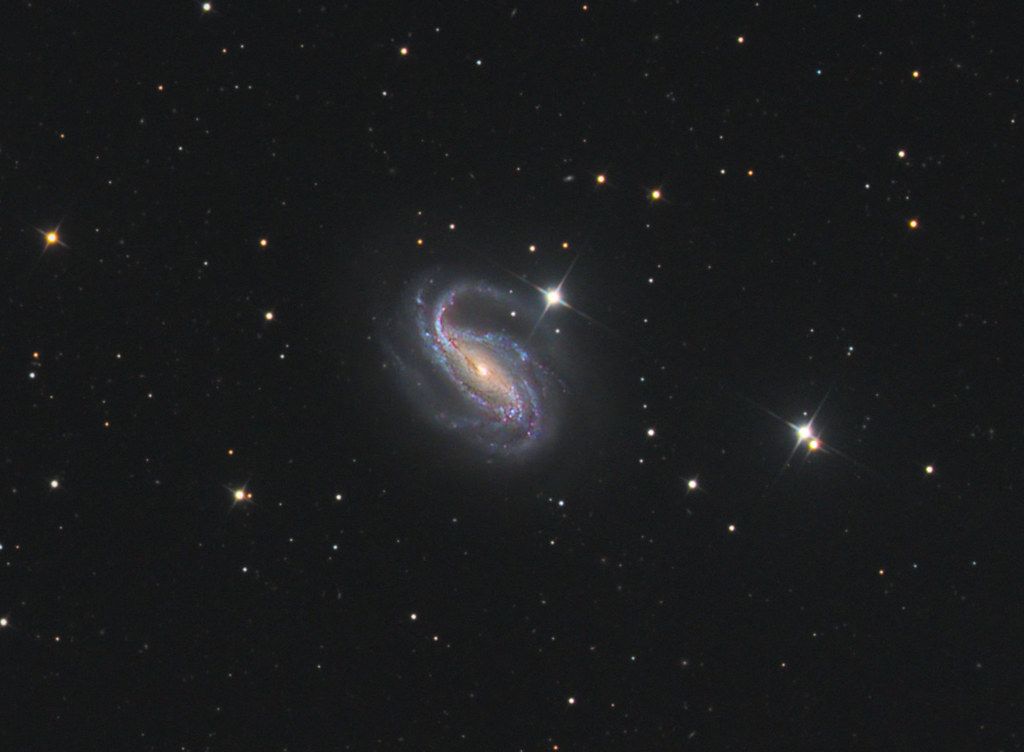 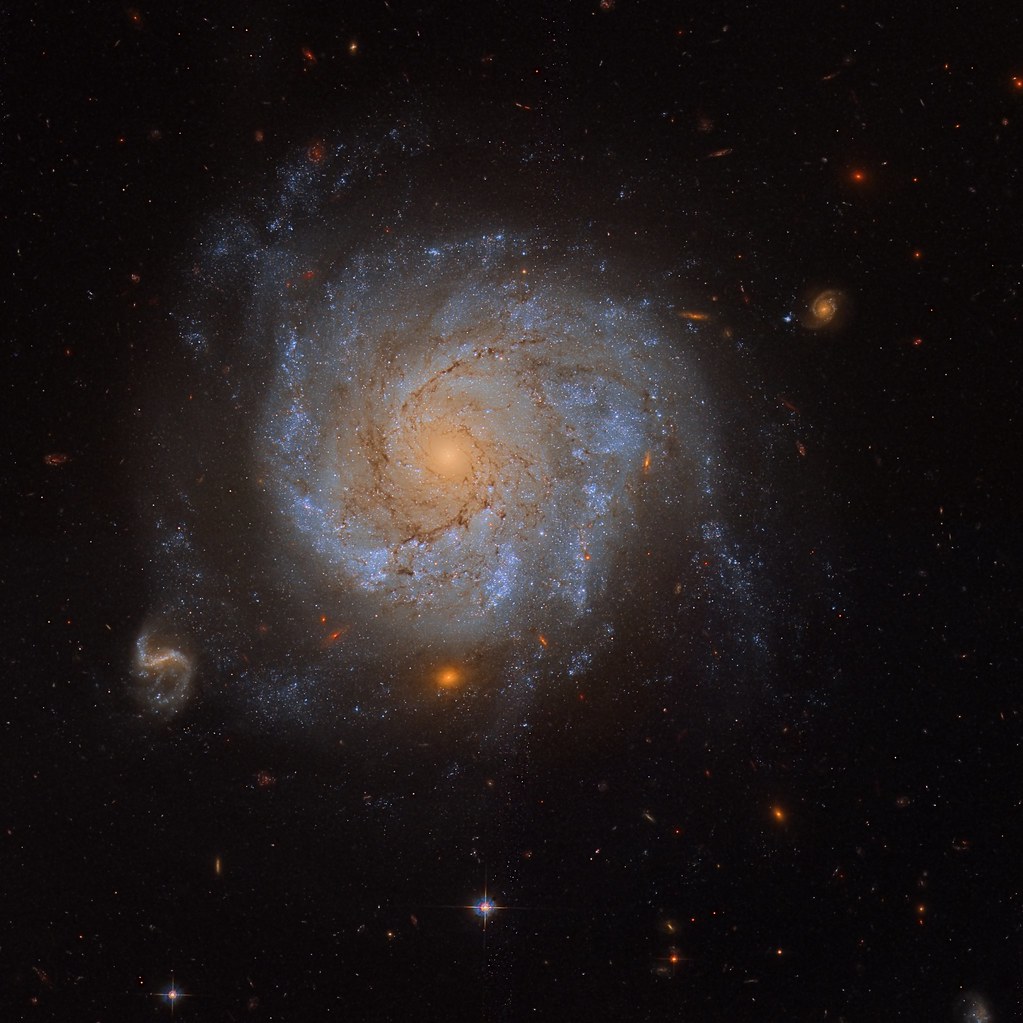 I was set up outside my dome observing through a small scope as a black bear knocked over and rummaged through my garbage. I invited him over to take a look at Ursa Major, the Great Bear. He became annoyed at this and offered to show me an image of a human religious figure in a tortilla he was eating. After a few tense moments, we agreed to be more tolerant and understanding of each other's world view. He is stopping by tonight for some borscht and a game of Twister.

With an apparent size of approx 5' X 3' NGC 613 is a modest sized galaxy 67 Million light years
away in the constellation Sculptor. It is an outlying member of the Sculptor group of galaxies.
The inner nucleus region of the galaxy is a relatively strong source of radio emissions. 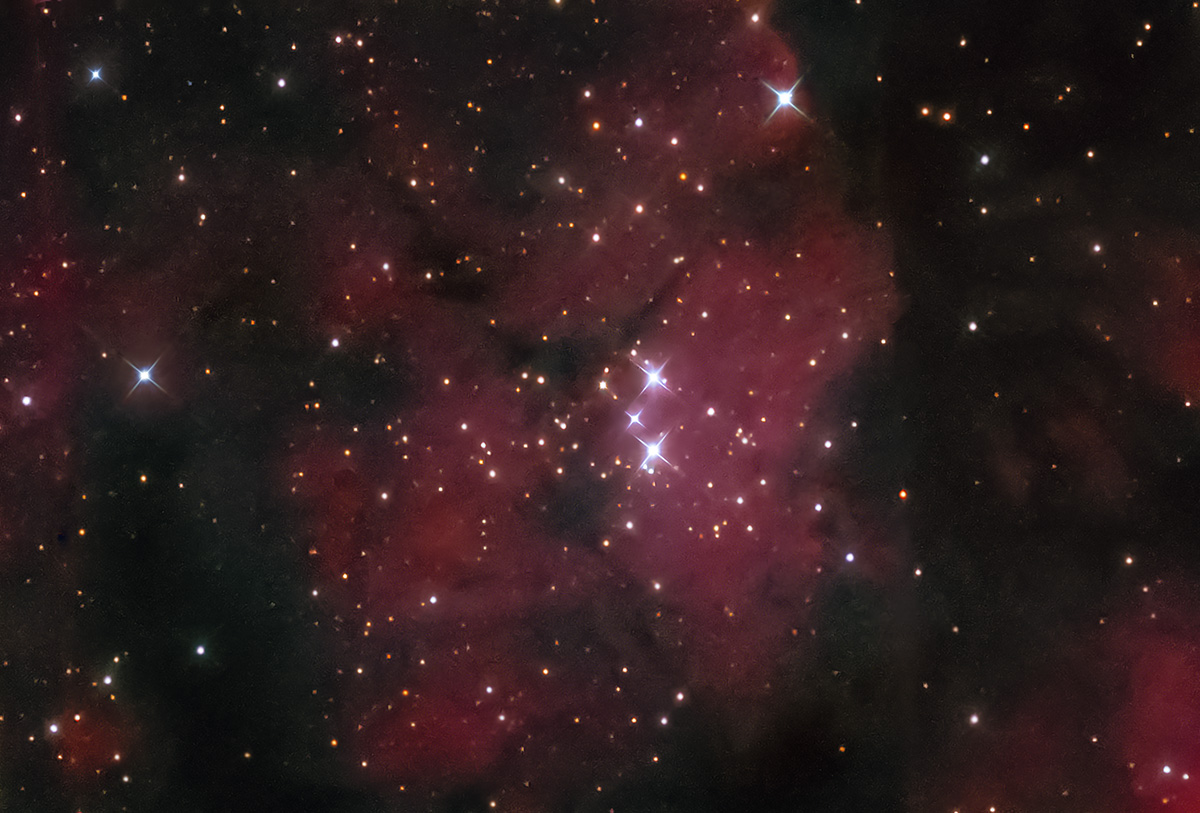 Berkeley 59 is an open cluster located in Sharpless 171. The cluster is the primary illuminating source for Sharpless 171. The bright star, designated BD+66 1673 and located in the upper right of the image, is one of the hottest stars within a thousand parsecs of the Sun. It has a surface temperature approaching 45,000 Kelvin.

Equipment used and image description may be viewed here.
http://www.waid-observatory.com/berk59-2017-10-10.html

NGC 7129
The 3330 light-year distance in the Cepheus constellation is NGC 7129. This reflection fog is home to nearly 130 young stars, many of which are younger than 1 million years old. These stars illuminate and reveal details of fog. Near the NGC 7129 some deep red crescent shaped shapes are formed, "Herbig-Haro", which indicates areas where new stars are born. These red regions are made up of ionized hydrogen, which is compressed into interesting forms by the shock wave of young, emerging stars. It is assumed that a similar starboard cradle was born in our Day, approx. 5 billion years ago. From a photographic point of view, the NGC 7129 has about 7 arc diameters and has a very low surface brightness, so capturing has had some challenges.

http://bzpc.hu/gallery/nebulae/ngc7129/
You do not have the required permissions to view the files attached to this post.
Last edited by bystander on Sun Oct 15, 2017 11:15 pm, edited 1 time in total.
Reason: Please, no hotlinks to images > 500Kb. Uploaded as an attachment.
Top 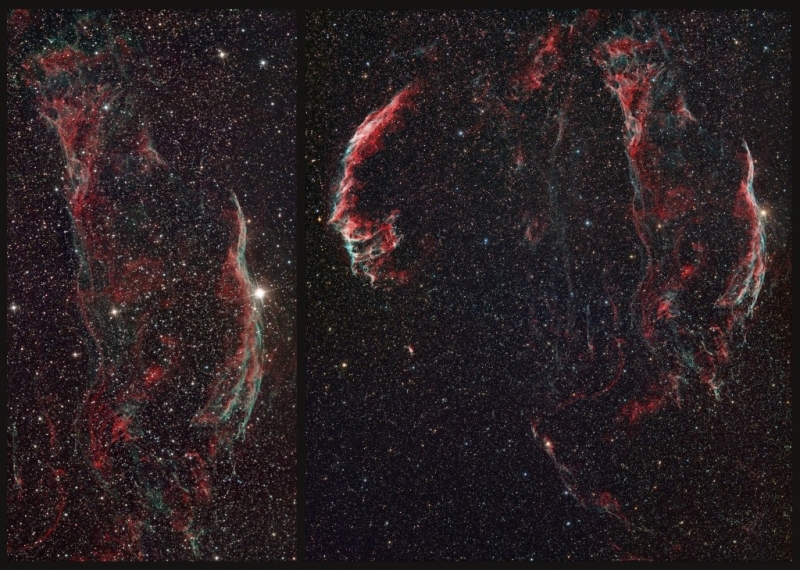 This bright star cluster is known as Melotte15 after its discover, Philibert Jacques Melotte (1880-1961).

Melotte 15 is embedded within and illuminates the central portion of the much larger glowing nebula identified as IC 1805 (Heart Nebula).

The three bright stars in an arc are type "O" stars which are the brightest and most massive stars known. Type O stars are also the shortest lived. While the Sun, a type "G" star, will happily burn its hydrogen fuel for 10 billion years or more, type O stars burn through their much more massive amount of fuel [typically type O stars are 20 to 100 times more massive than our sun] in as short as 3 to 6 million years. A very short lifespan as far as stars go.

Type O stars then end their lives in a spectacular Type II supernova which spreads the elements generated in the core of the star throughout the stellar neighborhood.

This interesting structure is a giant area of hydrogen gas that is caused to glow by the intense ultraviolet radiation from the massive stars of the Melotte 15 star cluster. It is estimated that this illuminated gas is more than 50 light years from the Melotte15 stars.

The Melotte 15 star cluster is estimated to be 7,500 light years away from Earth.

Hello friends. I am Raul Villaverde Fraile
Here I leave you this work.
It is a mosaic of 10 tiles of 40x400 "
They are made with:
Canon 550D cooled
Takahashi fsq106ed
I hope you like it.

Pondering - 1500px.jpg
Higher res here
You do not have the required permissions to view the files attached to this post.
Paul Wilson Images on Facebook
Top 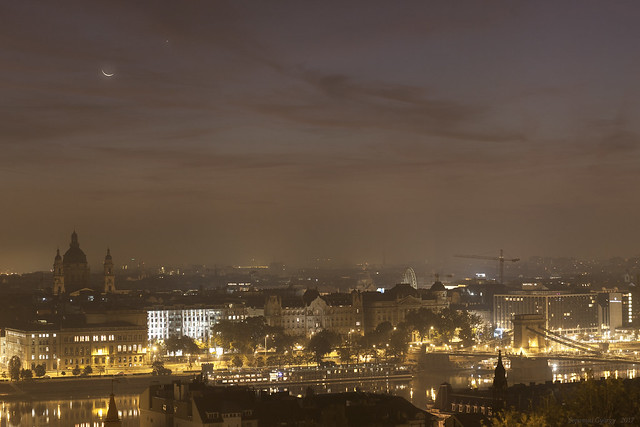 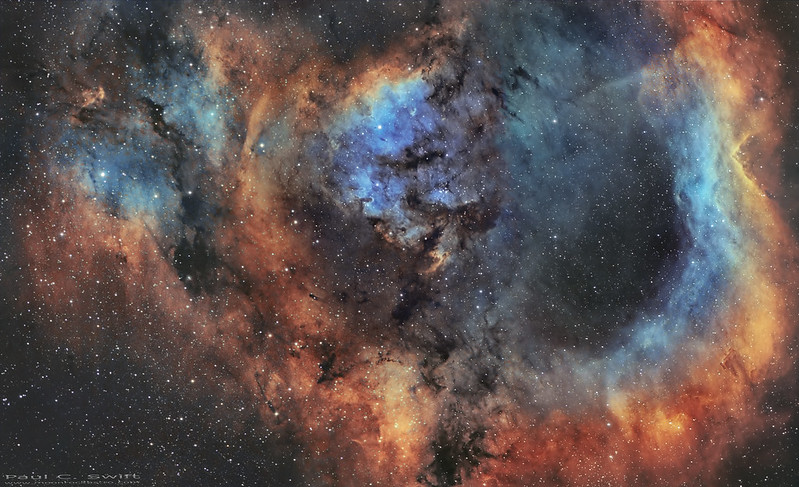 On October 16th at mid-day this is what the Sun looked like in the UK. Hurricane Ophelia had brought up a load of Saharan dust and smoke from Iberian forest fires. The sky looked like a scene out of Blade Runner - and the birds were behaving like it was a total solar eclipse. It was a really weird experience. 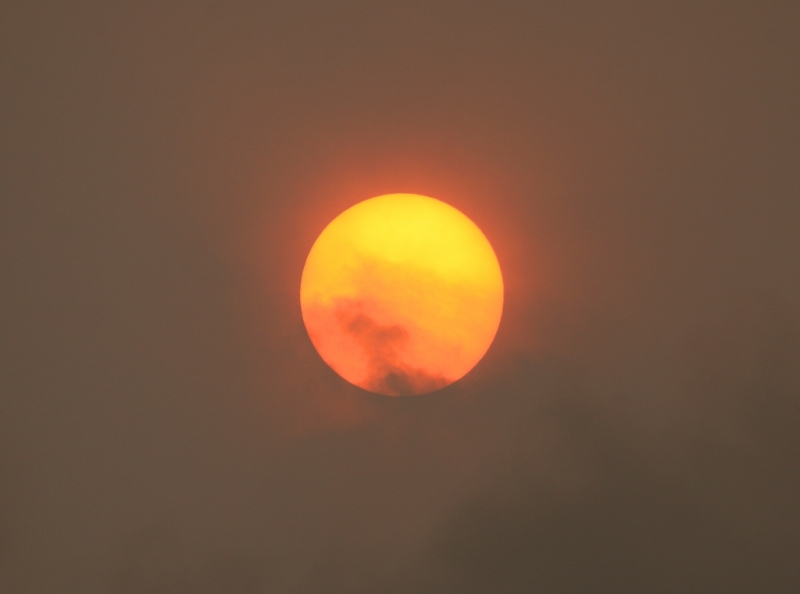 Conjunction of 3% Moon, Venus & Zaniah over the Swiss Alps

Early morning was a beautiful sight to behold. The 3% crescent moon rose along Mars (too high for the picture), Venus, which was close to Zaniah, a fainter star. I was hoping the moon would rise more to the west so that I could get some snow with it, but these beautiful mountains East of the 'Dents du Midi' in Switzerland will do! The shot is taken from Gex in France.
Sony a7rII + Sigma 150-500mm APO f/4-6.3, 3 landscape shots.

It is rare when you can get the perfect combinations of things in life. You have to content yourself with what's there and thrive with it. Even though the Jura mountain chain is bathed in light pollution from Lake Leman valley to the south and east, Lyon to the west and Bourg-en-Bress to the North, there is still something special about these peaks. They are not high and steep, but the nature there is impressive and soothing. What's my favorite thing? Hike them at night when listening to the sounds of wildlife. You can't get closer to nature than that. The milky way is still visible but it demands experience to get a clean shot in all this light pollution. It should remind us that it is an issue that needs to be tackled! By adapting our lighting (dimming, orientation of the beams...), we can dramatically improve the quality of our skies!
I took this shot at mont Jura around 22:30 LT with Canon 6D modded + Samyang 14mm f/1.8, it's 4 shots x 10'', f/2.8, untracked, ISO 3200. Processed in PtGui Pro, Ps and Lr.

The 27th of September offered an epic G3-strong storm, but being situated in Iceland, most of the show happened further south. It was the first time that I faced completely south to shoot them. However they still put on an amazing show. I was coming back from south-east #Iceland where a severe storm had flooded roads and drowned sheep, and I decided to remain stationed near Vík where the weather outlook was the most promising. In spite of a relentless high cirrus veil, the aurora sure showed up and was bright enough to be visible even through the layer. It just gave more noise, and patchy skies, but definitely a special atmosphere. As I was driving back and fourth between Seljalandsfoss and Vík to find patches of clear skies, the lights took me by surprise around 8:45pm so I quickly had to find a spot away from the highway. I found a beautiful place near the coast with a small stream. I love that the shot shows the flows and pathways in every way: the light in the aurora, the water and the faded milky way (you have to know it's there though!)
Canon 6D + Sigma 14mm f/1.4

Probably one of the most colorful aurora scenes from last week in Akureyri in northern Iceland. I love how the lights reflect in the turquoise water illuminated by the setting moon, the green aurora and the astronomical twilight. I had driven 6hours and waited another 3 hours hiking in the cold to get the shot and the skies eventually cleared! Patience always pays off!
Canon 6D + Sigma 14mm f/1.8

I have never witnessed such bright auroras in my whole life. Last week, as the solar storm is still raging on, the particles from the sun sparked a G1 strong event that brightened the Icelandic sky. When I say brightened, I mean literally. The particles lit up the gas molecules so much that it blew out all my highlights, and since I mainly take time-lapse, it was impossible to change the settings, but it gives you an idea of what the settings are for 'normal' aurorae. It is definitely on my top 3 displays ever.
I went to Thingvellir national park to shoot. One after the other, the aurora started with a typical arc growing from the north and moving southwards, and then exploded into pillars and coronas. In total, I witnessed 4 major explosions and coronas, as you can see on the pictures. The whole landscape was lit. I met with several photographers asking me for tips to shoot them as they also were shocked by their brightness. One show that I will miss and remember!

Last week was the time of year when all the leaves of small bushes were turning yellow and red in Iceland, contrasting with the green mosses and the dark basalt rocks. It got even more visually interesting when Lady aurora came out to play on top of it, delicately illuminating this natural decaying landscape. I took the shot in Thingvellir national park on September 28th under a G1 solar storm under an hour after sunset. The first quarter moon also gave good lighting and a prestine blue starry sky!
Canon 6D + Sigma 14mm f/1.8 @f/2, ISO 1600, 2'' 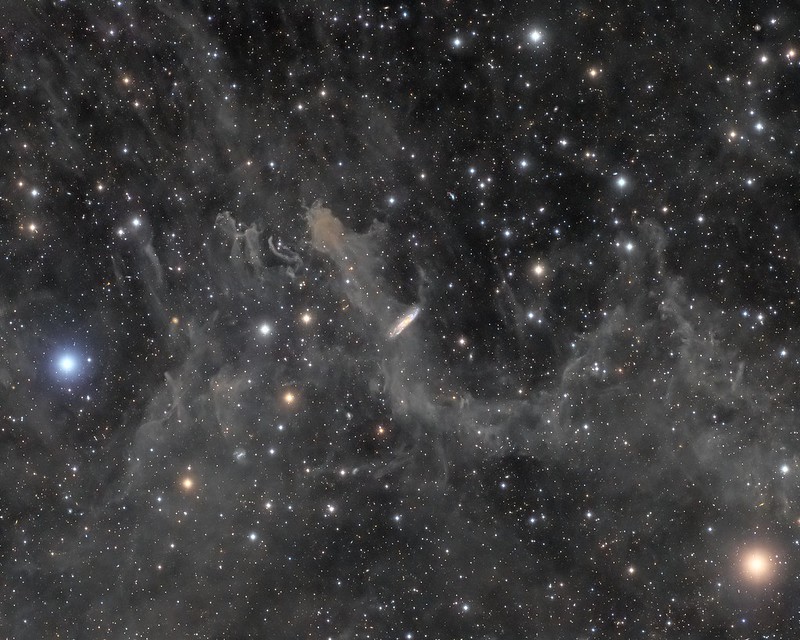 MBM54 and NGC7497 (Full Resolution) by Sergio Kaminsky, on Flickr 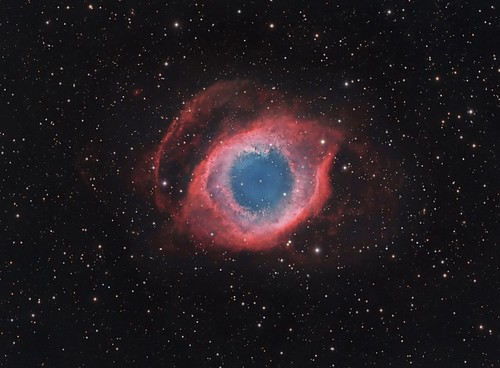 The Great Andromeda Galaxy with IFN