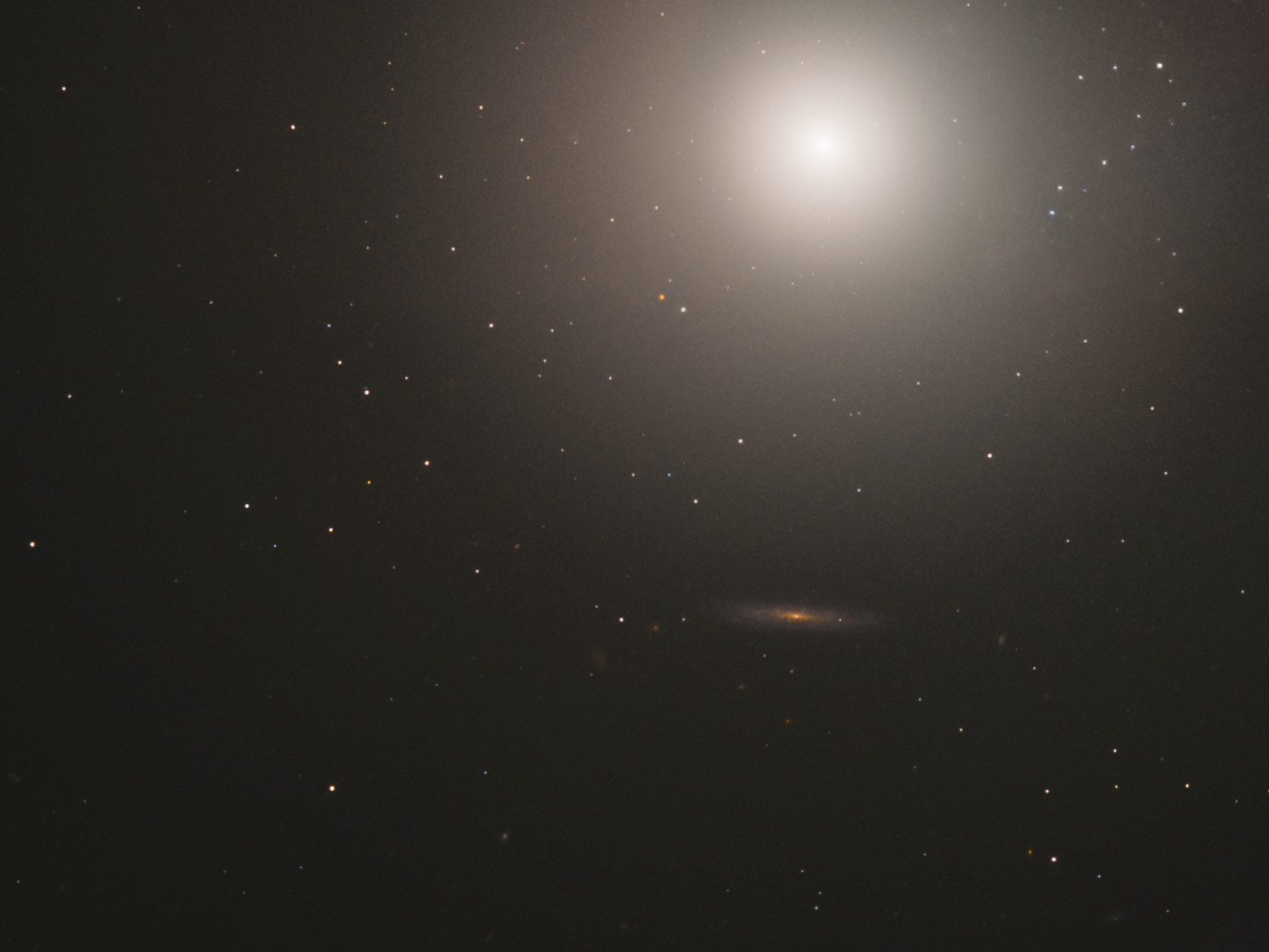 This huge ball of stars — around 100 billion in total — is an elliptical galaxy located some 55 million light-years away from us. Known as Messier 89, this galaxy appears to be perfectly spherical; this is unusual for elliptical galaxies, which tend to be elongated ellipsoids. The apparently spherical nature of Messier 89 could, however, be a trick of perspective, and be caused by its orientation relative to the Earth.

Messier 89 is slightly smaller than the Milky Way, but has a few interesting features that stretch far out into the surrounding space. One structure of gas and dust extends up to 150 000 light-years out from the galaxy’s centre, which is known to house a supermassive black hole. Jets of heated particles reach out to 100 000 light-years from the galaxy, suggesting that Messier 89 may have once been far more active — perhaps an active quasar or radio galaxy — than it is now. It is also surrounded by an extensive system of shells and plumes, which may have been caused by past mergers with smaller galaxies — and implies that Messier 89 as we know it may have formed in the relatively recent past.

Messier 89 was discovered by astronomer Charles Messier in 1781, when Messier had been cataloguing astronomical objects for 23 years — ever since he mistook a faint object in the sky for Halley’s Comet. Upon closer inspection, he realised the object was actually the Crab Nebula. To prevent other astronomers from making the same error, he decided to catalogue all the bright, deep-sky objects that could potentially be mistaken for comets. His methodical observations of the night sky led to the first comprehensive catalogue of astronomical objects: the Messier catalogue! Messier 89 holds the record for being the last ever giant elliptical to be found by Messier, and the most perfectly spherical galaxy in the entire catalogue of 110 objects.

IC 1613
http://www.chart32.de/index.php/component/k2/item/256
Copyright: CHART32
Processing: Bernd Flach-Wilken
IC1613.jpg
You do not have the required permissions to view the files attached to this post.
Top

This is a fantastic image and a superb portrait of the different stellar populations inside IC 1613. 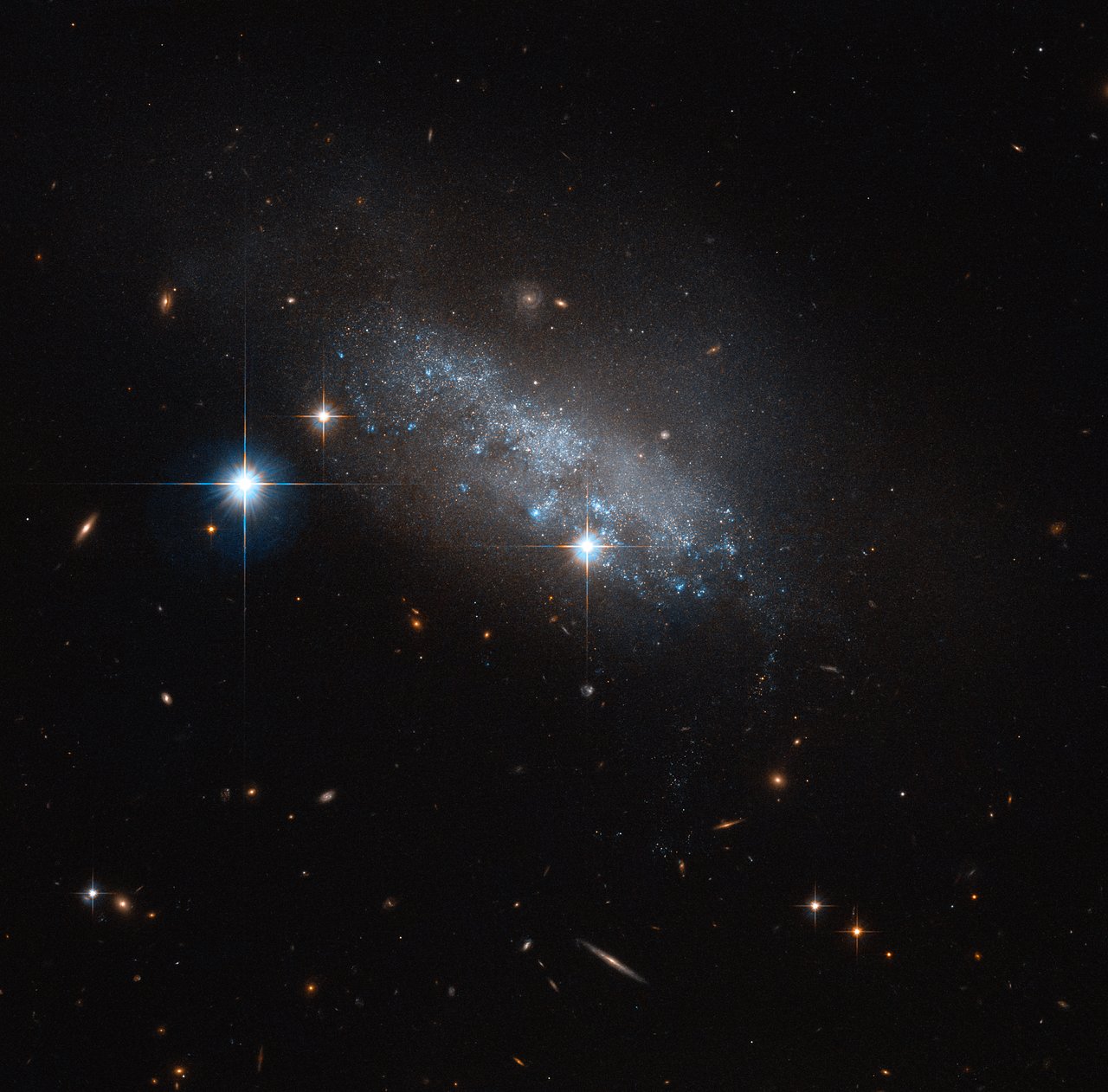 Maybe cosmic Vikings were there a few thousand years ago and wrote a message for us in dust. 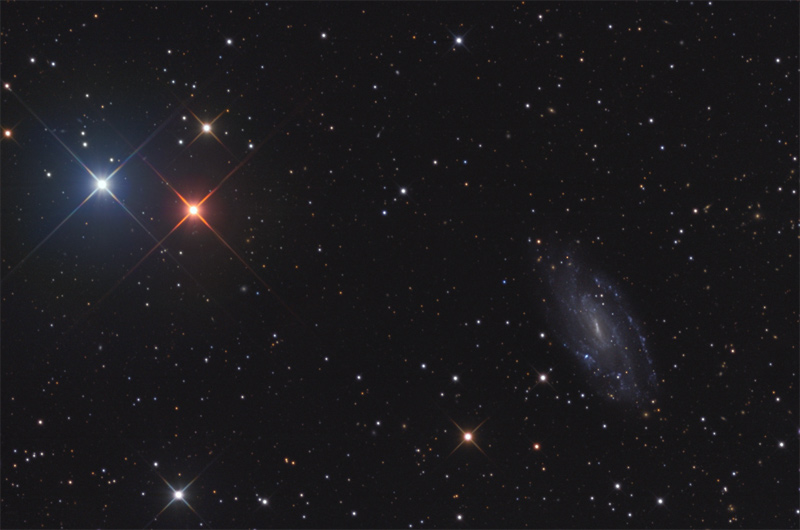 M77 and NGC 1055
http://www.karelteuwen.be/photo_page.ph ... 5&album=18
Copyright: Karel Teuwen
M77.jpg
You do not have the required permissions to view the files attached to this post.
Top

Thanks for an interesting picture of a rarely seen galaxy.

My impression is that IC 5201 is relatively large, but quite faint. Its surface brightness and overall luminosity seems to be fairly comparable to M33, meaning that its total luminosity is about 0.3 times that of the Milky Way.

But in other respects IC 5201 seems to be quite different from M33. For one thing, M33 has no bar, while there is a yellowish bar in IC 5201. More interestingly, M33 and IC 5201 have comparable B-V indexes - they are both quite blue galaxies - but their U-B indexes are very different. M33 has a healthy negative U-B index, a testament to its rather high levels star formation. IC 5201, by contrast, has a weak positive U-B index! There is not a lot of star formation going on in that galaxy at all, which is obvious from the picture, too. (Although there are a few bright blue-white knots in one arm of IC 5201, which I take to be sites of star formation.)

On the other hand, Pi 1 Gruis appears to be a relatively modest star, perhaps 60 times as bright as the Sun, whereas the Garnet Star is a stupendous whopper. Its parallax is uncertain, but it may be as bright in optical light as some 50,000 times the Sun or so. And seeing how infrared the Garnet Star is, you have to realize what a super duper cosmic lighthouse the Garnet Star might be, perhaps approaching half a million times the Sun in bolometric (total) luminosity. Jim Kaler has called the Garnet stars one of the biggest stars in the Milky Way galaxy.

The Garnet Star owes its brilliance and red color to its high mass, cool temperature and enormous size. Pi 1 Gruis is another sort of beast, a star of "normal K0III size", and its red color must be due to internal processes, perhaps comparable to dumping "pollution" in its upper atmosphere. 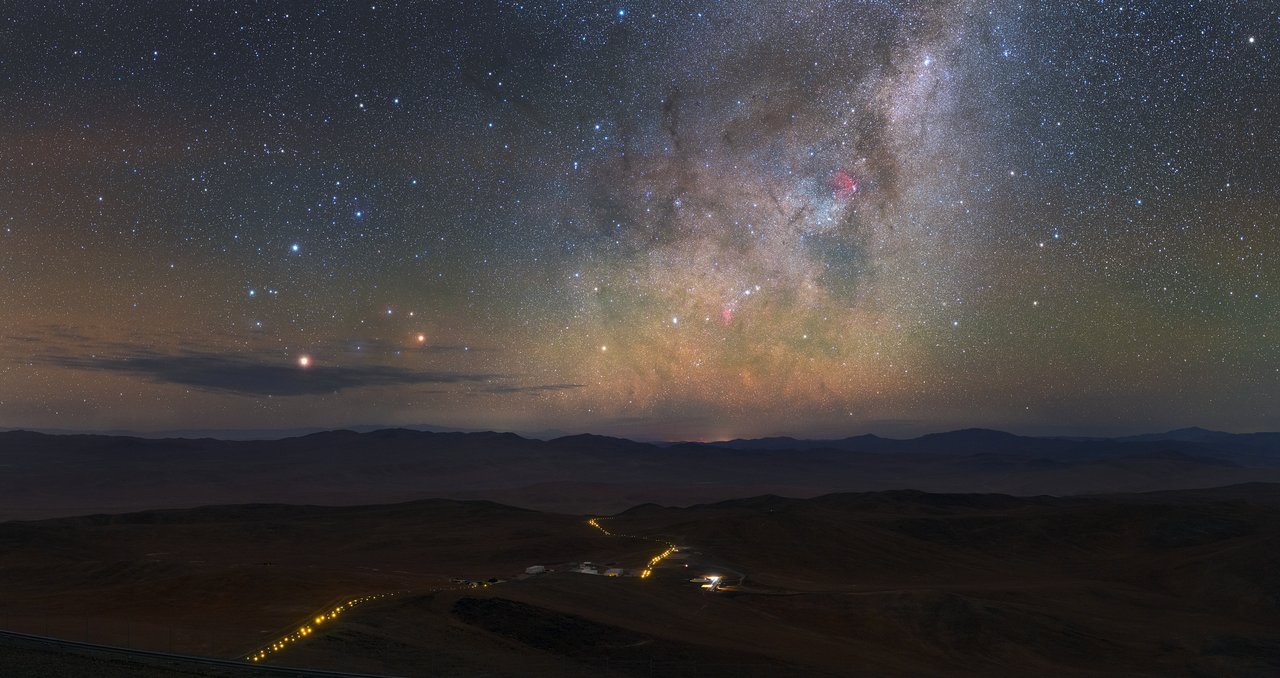 A star-strewn nighttime sky hangs over the Chilean landscape in this captivating photograph. A broken line of yellow lights weave their way across the dark rolling hills below. These marks the route between ESO’s Paranal Observatory, situated atop Cerro Paranal, and the Residencia, the home-from-home for astronomers, technicians and other staff working at the observatory.

Designed to provide a cool refuge against the harsh conditions of the Atacama desert, the Residencia is set into a natural hollow and blends perfectly into its arid surroundings. As well as offices and rooms for visiting astronomers, this desert refuge contains a verdant garden and swimming pool set beneath a 35-m wide glass-covered dome. As befits any building near an astronomical observatory, the Residencia is designed to minimise light pollution and to preserve the exceptionally dark skies above Paranal.

This image was taken by astrophotographer and ESO Photo Ambassador Petr Horálek. A long-time collaborator with ESO, Petr loves photographing rare night-sky phenomena and beautiful and naturally dark night skies across the world — such as the ones at Paranal.

HEIC: Peering into the Past 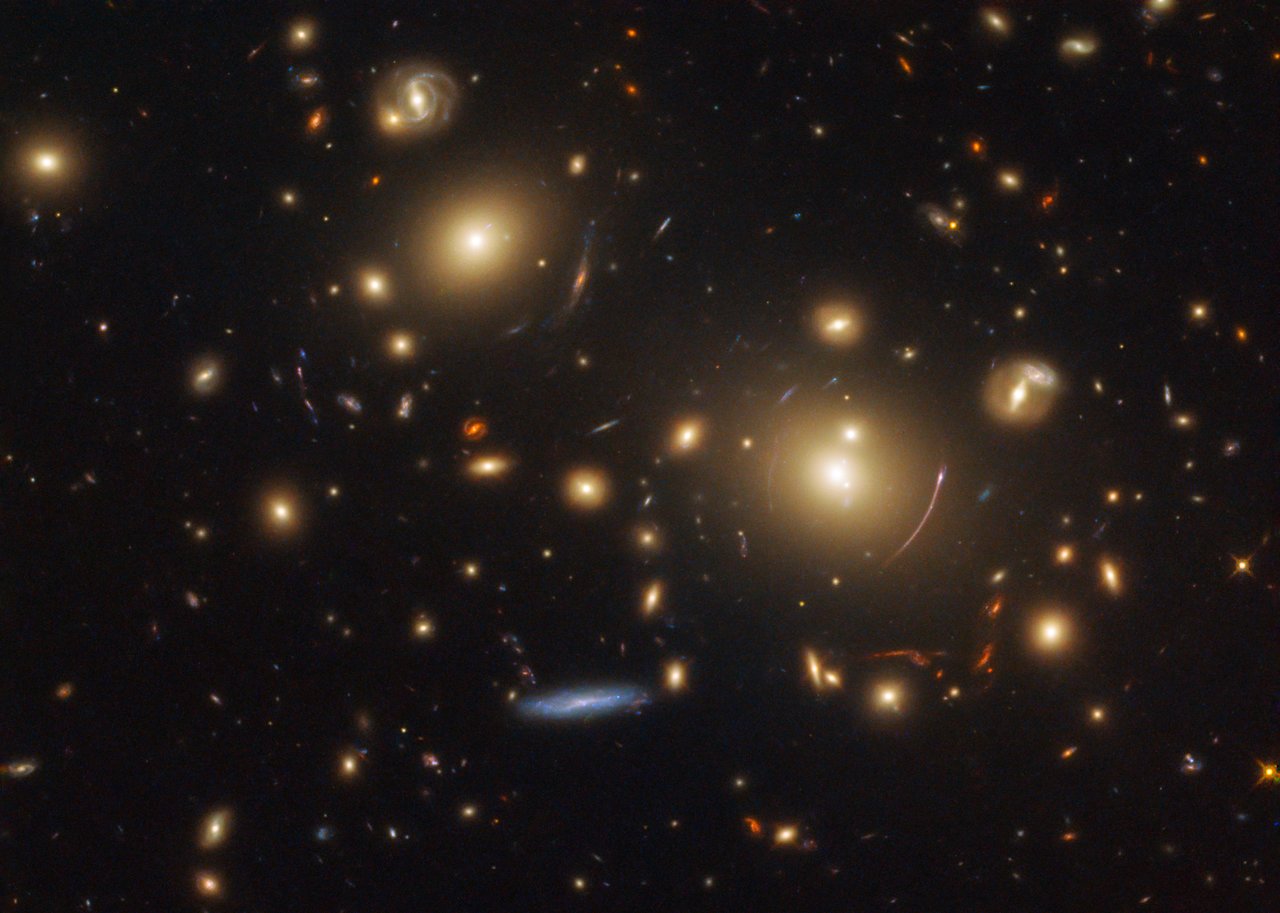 This picture showcases a gravitational lensing system called SDSS J0928+2031. Quite a few images of this type of lensing have been featured as Pictures of the Week in past months, as NASA/ESA Hubble Space Telescope data is currently being used to research how stars form and evolve in distant galaxies.

Gravitational lensing can help astronomers study objects that would otherwise be too faint or appear too small for us to view. When a massive object — such as a massive cluster of galaxies, as seen here — distorts space with its immense gravitational field, it causes light from more distant galaxies to travel along altered and warped paths. It also amplifies the light, making it possible for us to observe and study its source.

In this image, we see two dominant elliptical galaxies near the centre of the image. The gravity from the galaxy cluster that is the home of these galaxies is acting as the aforementioned gravitational lens, allowing us to view the more distant galaxies sitting behind them. We see the effects of this lensing as narrow, curved streaks of light surrounding both of the large galaxies.

This image was observed by Hubble as part of the Sloan Giant Arcs Survey programme. 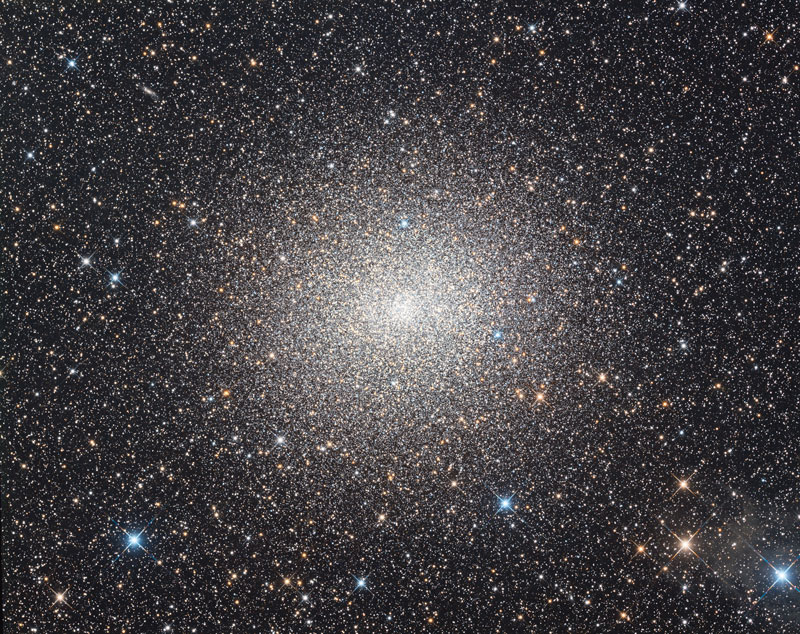 This globular cluster is not a star.

NGC 1999
https://www.eso.org/public/images/eso1304a/
Copyright: ESO/APEX (MPIfR/ESO/OSO)/T. Stanke et al./Digitized Sky Survey 2
eso1304a.jpg
You do not have the required permissions to view the files attached to this post.
Top

M29 region
http://afesan.es/Deepspace/slides/Dobas ... us%29.html
Copyright: Antonio Sánchez
M29.jpg
You do not have the required permissions to view the files attached to this post.
Top

NGC 2362
http://members.pcug.org.au/~stevec/ngc2 ... 0_RC14.htm
Copyright: Steve Crouch
ngc2362.jpg
You do not have the required permissions to view the files attached to this post.
Top

You do not have the required permissions to view the files attached to this post.
Last edited by barretosmed on Tue Jan 29, 2019 10:53 pm, edited 1 time in total.
Top


COLORED MOON FUNCTION: The Moon is usually seen in subtle shades of gray or yellow
The different colors are recognized to correspond to real differences in the chemical composition of the lunar surface.
The blue tones reveal areas rich in ilmenite, which contains iron, titanium and oxygen, mainly titanium, while the orange and purple colors show relatively poor titanium and iron regions.
Trips to the moon were already indicated by similar images.

You do not have the required permissions to view the files attached to this post.
Top
55 posts