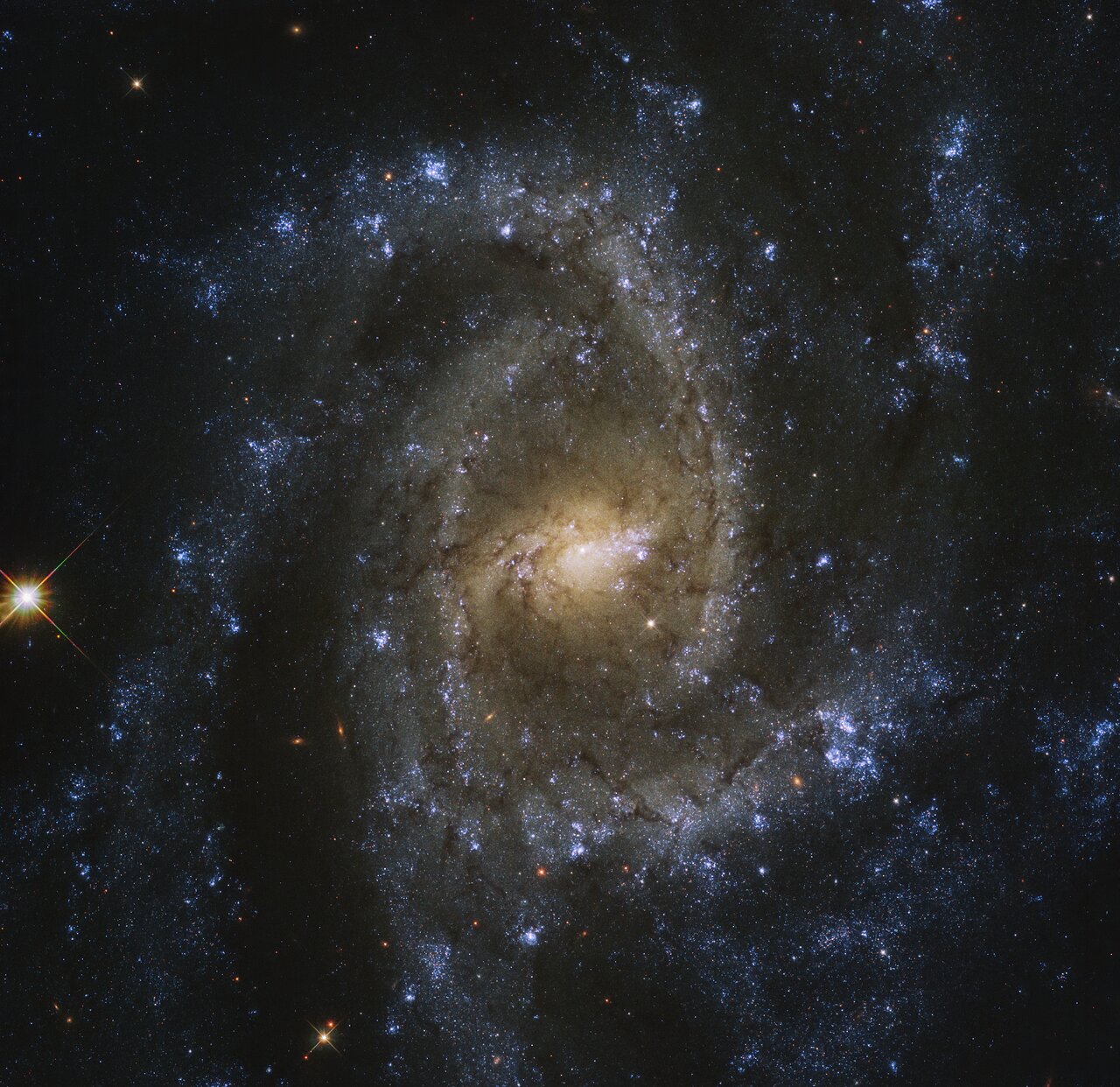 The twisting patterns created by the multiple spiral arms of NGC 2835 create the illusion of an eye. This is a fitting description, as this magnificent galaxy resides near the head of the southern constellation of Hydra, the water snake. This stunning barred spiral galaxy, with a width of just over half that of the Milky Way, is brilliantly featured in this image taken by the NASA/ESA Hubble Space Telescope. Although it cannot be seen in this image, a supermassive black hole with a mass millions of times that of our Sun is known to nestle in the very centre of NGC 2835.

This galaxy was imaged as part of PHANGS-HST, a large galaxy survey with Hubble that aims to study the connections between cold gas and young stars in a variety of galaxies in the local Universe. Within NGC 2835, this cold, dense gas produces large numbers of young stars within large star formation regions. The bright blue areas, commonly observed in the outer spiral arms of many galaxies, show where near-ultraviolet light is being emitted more strongly , indicating recent or ongoing star formation.

Expected to image over 100,000 gas clouds and star-forming regions outside our Milky Way, this survey hopes to uncover and clarify many of the links between cold gas clouds, star formation and the overall shape and morphology of galaxies. This initiative is a collaboration with the international Atacama Large Millimeter/submillimeter Array (ALMA) and the European Southern Observatory's Very Large Telescope's MUSE instrument, through the greater PHANGS program (PI: E. Schinnerer).

M63
https://www.astrobin.com/sg58hk/0/
Copyright: Rémi Méré
YvyvGOWv0ARQ_1824x0_sWXLOnwG.jpg
You do not have the required permissions to view the files attached to this post.
Top

Sh2-174
http://www.cfm2004.altervista.org/astro ... 2-174.html
Copyright: Cristina Cellini and Fiorenzo Mazzotti
sh2-174.jpg
You do not have the required permissions to view the files attached to this post.
Top

Sh2-221, Sh2-216 and C/2017 T2 Panstarrs
https://www.astrobin.com/s8usj9/
Copyright: Peter Csordas
HLL0xa0QgSZn_1824x0_sInFZEXc.jpg
You do not have the required permissions to view the files attached to this post.
Top

CG 4
https://www.astrobin.com/z8pu0a/
Copyright: Xing Keyu/Chilescope
qIm5_vrviyQJ_1824x0_TYmrbZqP.jpg
You do not have the required permissions to view the files attached to this post.
Top

AAS: Simulating the Birth of a Close Binary

apjlab9d86f1_hr[1].jpg
The stills above (click for the full view!) represent different time stages in the formation of a close stellar binary from a collapsing cloud of gas. In a recent study, two researchers from Kyushu University in Japan, Yu Saiki and Masahiro Machida, conduct numerical simulations to track the complicated process of a binary’s formation and evolution over ~400 years. In the above frames, the top left panel shows the fragmentation of the gas cloud into two cores roughly 9,000 years after the cloud initially begins to collapse. The succeeding panels show how the separation between these two protostars shrinks over the next several hundred years and disks of gas form around each star and around the binary pair. Saiki and Machida’s simulations also show the high-velocity jets driven from each protostar in the process (see the video below), and how the twin jets tangle on large scales as the stars orbit one another. The characteristics revealed in these simulations neatly reproduce our observations of protobinary systems. For more information, check out the original article linked below the video.


Twin Jets and Close Binary Formation ~ Yu Saiki, Masahiro N. Machida
You do not have the required permissions to view the files attached to this post.
Know the quiet place within your heart and touch the rainbow of possibility; be
alive to the gentle breeze of communication, and please stop being such a jerk. — Garrison Keillor
Top
33 posts