A few new images for a happier new year... 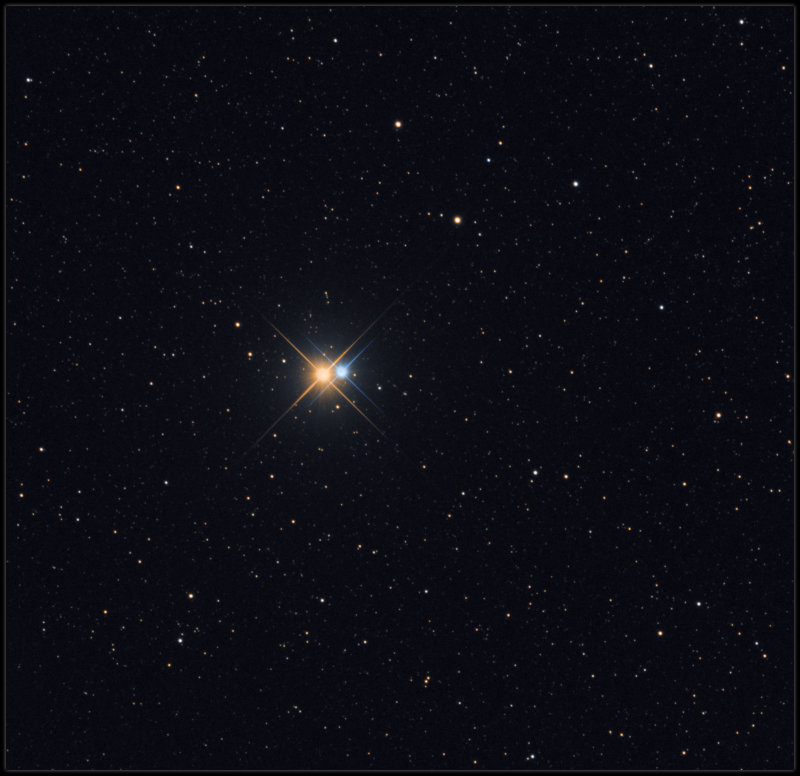 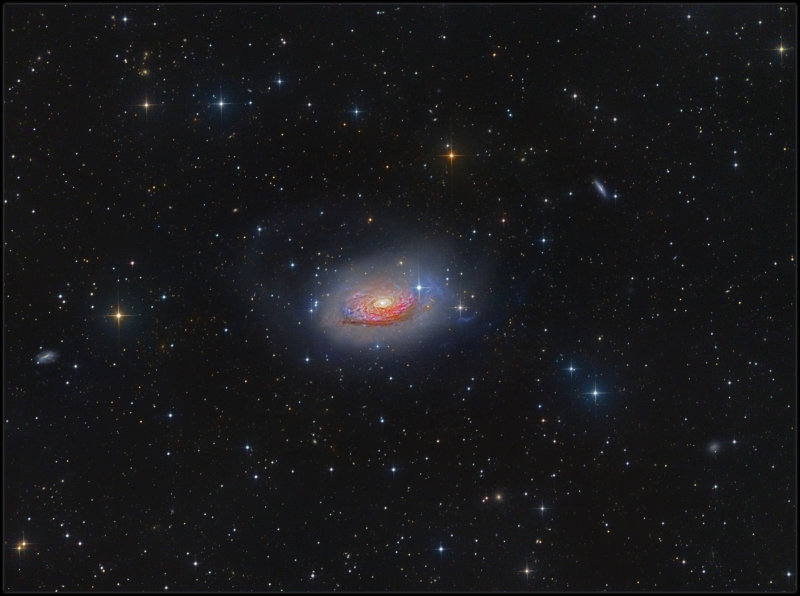 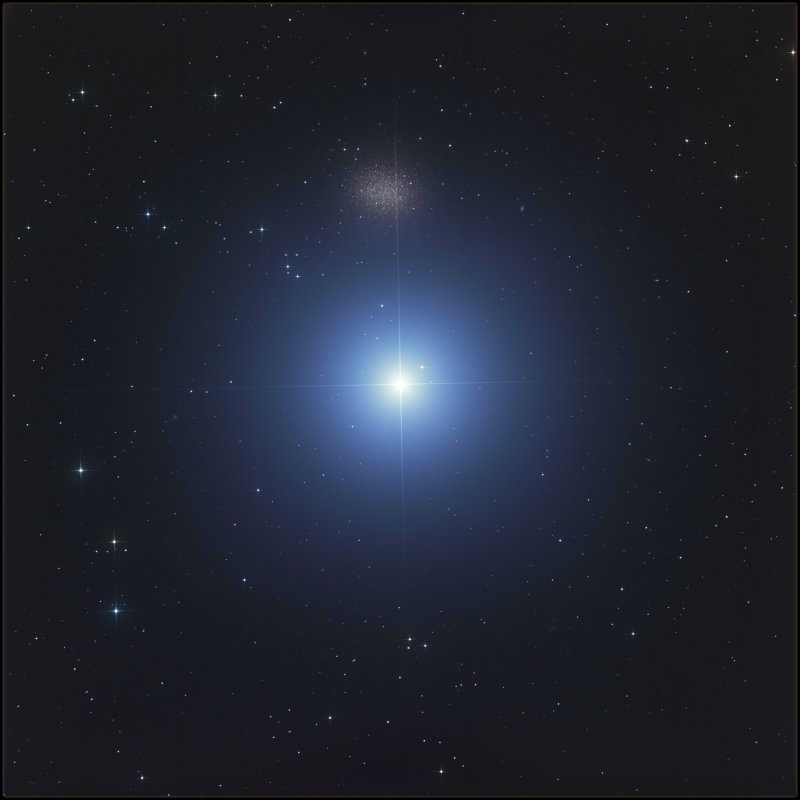 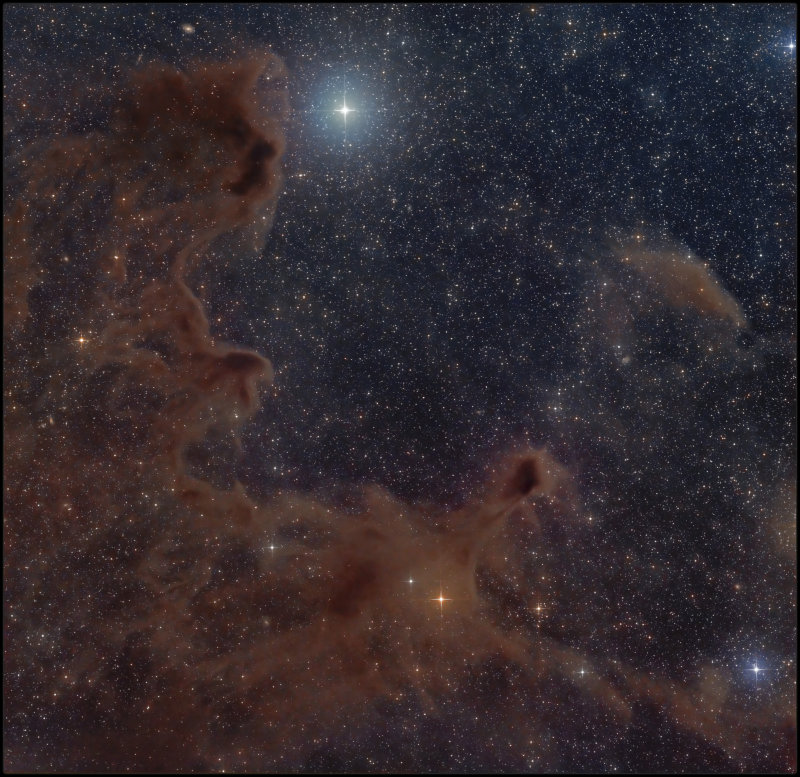 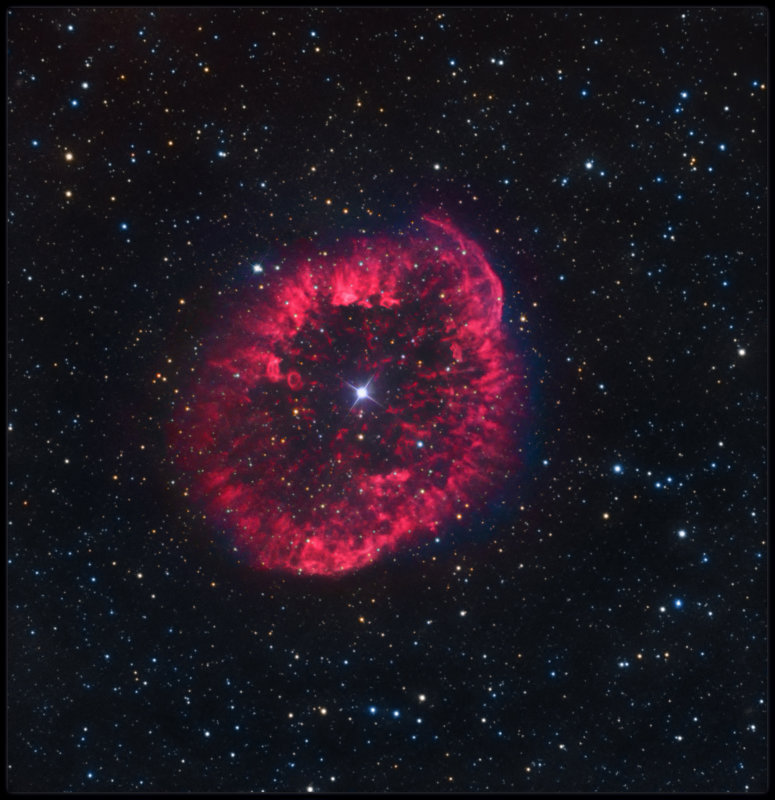 StDr1 (PNG 185.1+-0.9) is a new spectrum confirmed planetary nebula (PN) in the constellation of Taurus.
The PN was discovered in October 2019 by the French-German research team Marcel Drechsler and Xavier Strottner.
The potential central star of StDr 1 is located at coordinates 05:53:48.86 +24:02:41.45.
If this star is used as a calculation basis, then StDr 1 is located at a distance of 9203 light years from Earth.
For a PN at this distance, it is unusually bright.
In addition, this photo was the first to detect an annular H-alpha structure around StDr 1.
*
Discoverers: Marcel Drechsler, Xavier Strottner
Photographer: Rochus Hess
Image processing: Marcel Drechsler
Location: Vega Observatory Haus der Natur Salzburg (Austria)
Telescope: 1 metre ASA telescope at the "Vega Observatory Haus der Natur Salzburg"
Camera: FLI MicroLine 16803
Exposure: 26x20min H-Alpha, 17x20min OIII and 6x5min RGB each, total 15.8 hours 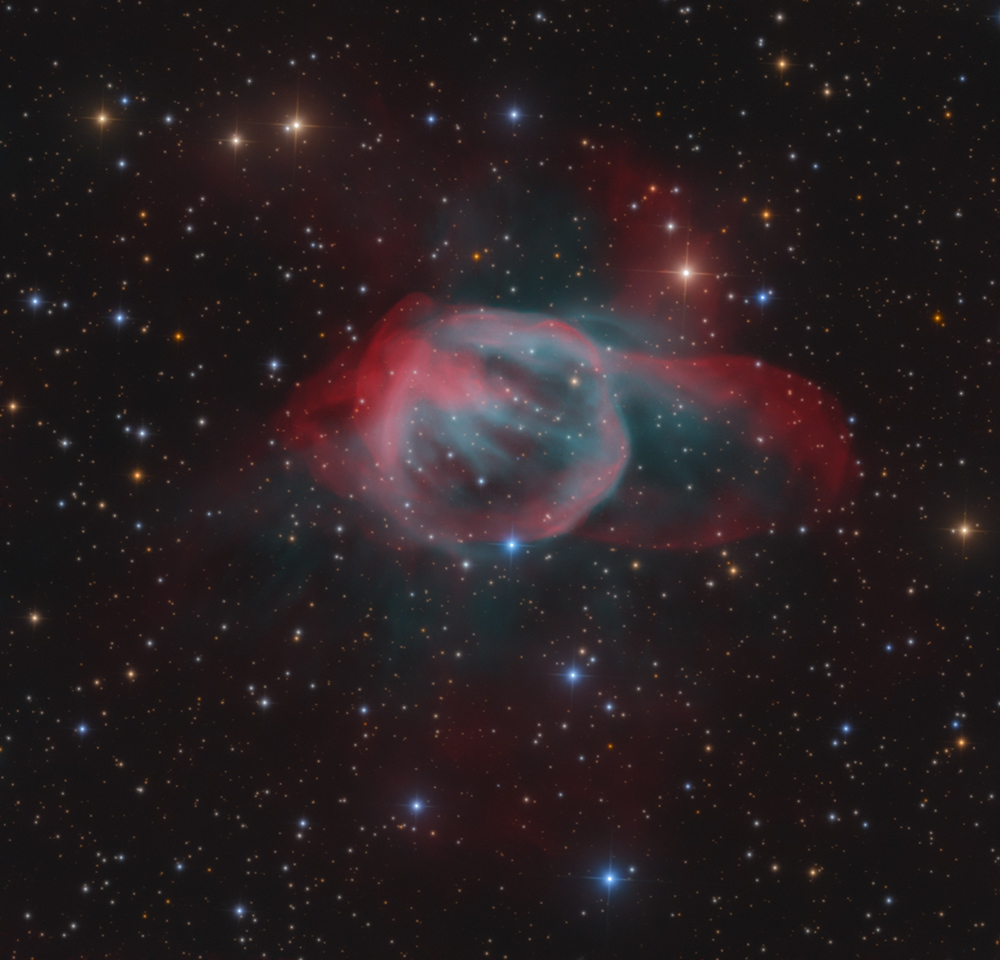 Final Abell 21 Sign (1500).jpg
Click on above for larger image.
Tak FSQ130 with Astrodon 5nm Filters.
Full details @ https://www.kinchastro.com/abell-21-202 ... ebula.html
You do not have the required permissions to view the files attached to this post.
Top

Three snapshots of The Great Conjunction spread apart by 24 hours. The images are laid out aligned with the Equatorial Grid. This shows the actual movement of the planets across the three days. The images have been processed from 50% of 1250 frames each using PIPP, AstroSurface and Gimp. The Equatorial Grid is from Stellarium. The brightness of Jupiter's moons have been selectively increased to make it more visible.

the_great_conjunction_full.jpg
You do not have the required permissions to view the files attached to this post.
Top

The Milky Way from Sagittarius to Cassiopeia in both Narrowband and True Color
http://www.woodlandsobservatory.com
Copyright: Alistair Symon

This is the culmination of most of my imaging work over the last 2 years. In total 186 images have been combined in a mosaic. 1600 hours of data was collected through H-alpha, SII, OIII and RGB filters using a combination of focal lengths (700mm, 530mm, 85mm, 35mm and 14mm). The resulting image shows the Milky Way from Sagittarius to Cassiopeia in both Narrowband using the Hubble Palette and True Color. Because the two Milky Way images were taken using very similar focal lengths for each of the images it makes for a nice side by side comparison. It's best viewed on a big screen! You can see the high resolution image here.
http://www.woodlandsobservatory.com/Two ... ys2020.htm
Top 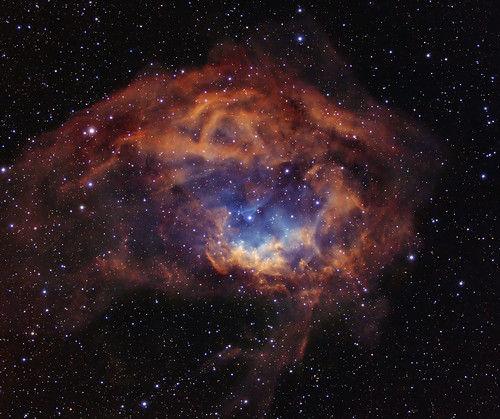 Hope you are good and healthy! This is my best shot at the Omega Centauri star cluster (NGC 5139), right from my backyard in the middle of the city!
I did it with my scope at 2032 mm, one of the highest resolution shots I´ve ever done with my amateur telescope.

As polaris australis is very dim and low from my latitude, it´s very difficult to have a perfectly polar aligned telescope. After several attempts, I finally had a very good drift align, and pointed at this beautiful star cluster, the biggest and brightest in the nightsky!

please find attached two images, taken in the countryside few km away from Turin (Italy) before sunrise on January 11, 2021, showing the conjunction between a slender crescent Moon and Venus, immersed in the colours of twilight.

Looking under the Moon (from Earth)--South Pole stereographic projection 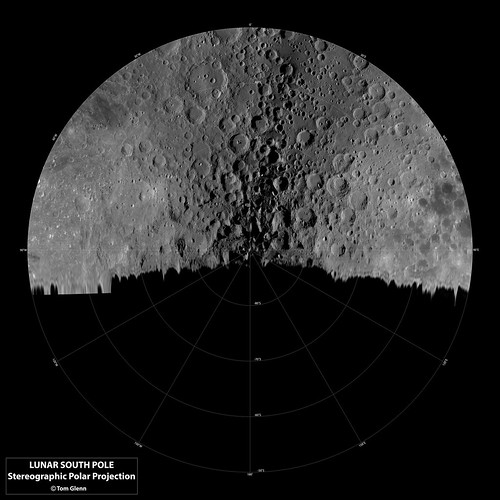 This is a stereographic polar projection of the lunar South Pole, generated by map projecting standard Earth-perspective images that I captured with a C9.25 Edge HD telescope. Images from two dates, separated by more than two years, and differing in their lunar phase and libration values, were used in this composite. The most recent data was from last week. The resulting map shows the South Pole, as well as details beyond both the 90E and 90W meridians, which would not be possible in any single observation. Indeed, before the advent of orbital imagery, our knowledge of the polar regions and lunar far side was limited to what could be seen during strong libration events.

The map is also available with selected craters labeled below:
https://flic.kr/p/2krr1mc

In addition to documenting the detail within many craters of the South Polar region that are difficult to observe from Earth, this image clearly demonstrates how greater than 50% of the lunar surface is visible from Earth over a period of time, due to libration. The true South Pole lies on the rim of Shackleton crater, which is shown in the image. Many of the crater floors in this region are mired in perpetual shadow, due to the minimal axial tilt of the Moon with respect to the ecliptic plane. Conversely, many of the tall mountain peaks in the vicinity of the South Pole enjoy sunlight more than 90% of the time. In addition to the region near the pole, other notable features of the image include details across the 90 degree meridians, including albedo features of Sikorsky crater and Vallis Schrodinger to the southeast, on the lunar far side.

Capture details:
C9.25 Edge HD telescope, focal length 2350mm, f/10.
ASI183mm camera, green and red filters.
January 4, 2021, 11:50-12:08UT and July 20, 2018, 03:17-03:41UT.
San Diego, CA
Raw video files were stacked following normal lunar processing routines. The stacked images were then map projected using free software (WinJUPOS). In brief, a reference frame was set using ephemeris data and control points of known latitude and longitude in the images. The reference frame was then used to create a stereographic south polar projection, using planetocentric latitudes. Map projected images were then merged into the final composite in Photoshop. The full sized map presented here is 5600x5600px. The average image scale is ~475m/px, although a stereographic projection has some deviation in scale as a function of latitude, and there are also distortions at the extreme latitudes and longitudes of the image. These distortions arise from the extremely foreshortened view from Earth, which hides some data from view, and does not account for terrain elevation. Remarkably, most latitude and longitude coordinates throughout the map are within several kilometers accuracy when checked against known values (e.g. LRO data), notwithstanding the distortions noted above.

The image panels from which the map projection is composed are shown in the following link:
https://flic.kr/p/2krsFA2

Edited image scale typo, changed from 445m/px to 475m/px, although as noted above, scale is not constant in this projection, so this is simply an approximation
Last edited by Tom Glenn on Tue Jan 12, 2021 10:55 pm, edited 1 time in total.
Top

Hi, here's my submission with my first dedicated astro camera.
M81 + M82 in some ifn.

Cold winter night
Copyright: www.instagram.com/robin_onderka | Robin Onderka
---
What a cold night! And the power pole seemed to point directly at the Andromeda Galaxy!

This photo was taken about 2 kilometers from the parking lot in Bumbálka on the Czechoslovak border. After a long time without a photo shoot (due to COVID-19 lockdown and bad weather), I didn't want to bother with the startracker, so it's only photographed from tripod using a 35 mm lens. 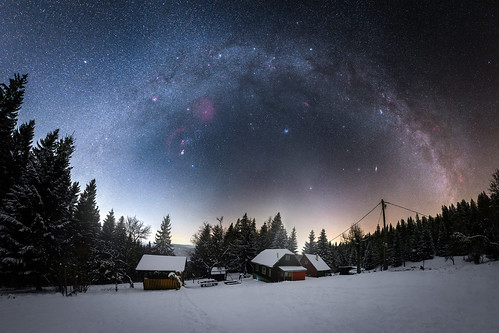 Is a starless version of the Flaming Star Nebula, IC 405. I really liked how the nebulosity kind of looks like a fire breathing dragon, or maybe an evil Seahorse with bad breath, whichever you prefer..


Flaming_Star_Nebula_33_frames_300s_iso3200_115_6D_Lenhancepps.jpg
You do not have the required permissions to view the files attached to this post.
Top 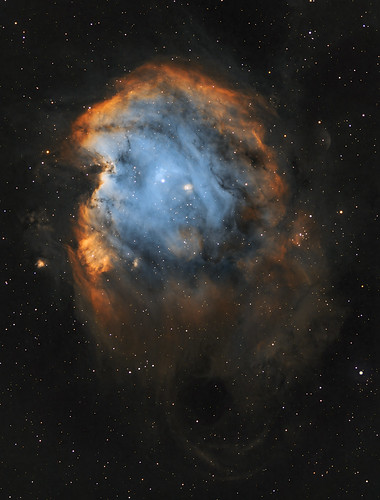 A higher resolution version of the image is available here : https://photos.smugmug.com/photos/i-8m7 ... m7fbQ6.jpg 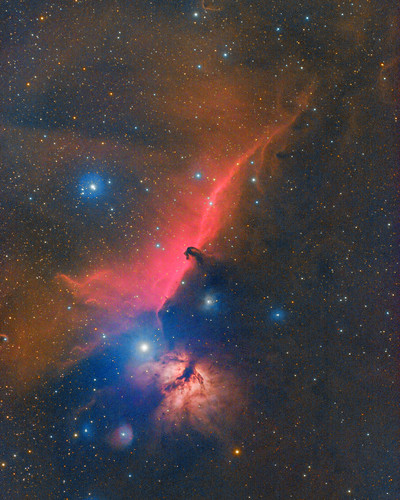 Horsehead in HaRGB by Ronan Hunt, on Flickr
Top 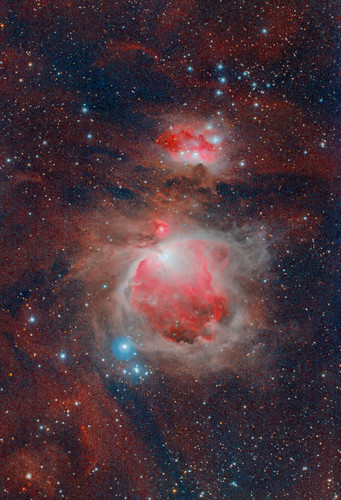 M42 in SHROGOB by Ronan Hunt, on Flickr
Top 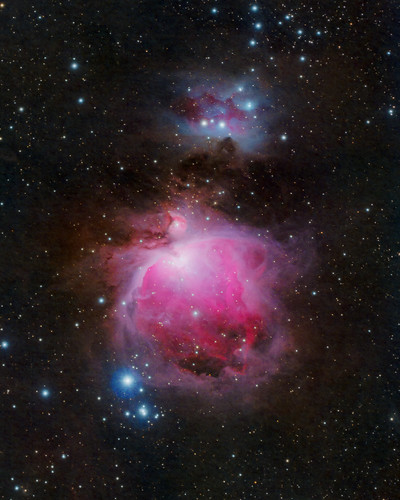 M42 in RGB by Ronan Hunt, on Flickr
Top 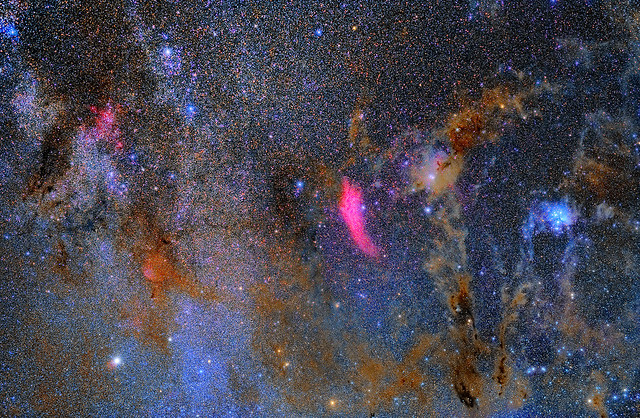 How many deep sky objects can you spot in this widefield view of the night sky? At first glance one might think these are clouds in the sky, but the amazing cloud-like areas are dark nebulae of dense dust blocking starlight in our Milky Way Galaxy. I am absolutely blown away by the beauty of dark nebulae and the Winter Milky Way in general! I never realized the Pleiades had such widespread dark nebulae around it.
Last edited by bystander on Wed Jan 13, 2021 6:52 pm, edited 1 time in total.
Reason: Please, no hot links to images > 500KB. Substituted smaller image,
Top

This is LBN 581 (also known as NGC 7822) in the HSO palette. It is 25.3 hours of data. LBN 581 is very strong in h-alpha and much weaker in both OIII and SII which may explain why it doesn't get a lot of love from imagers but I still found it an interesting object. 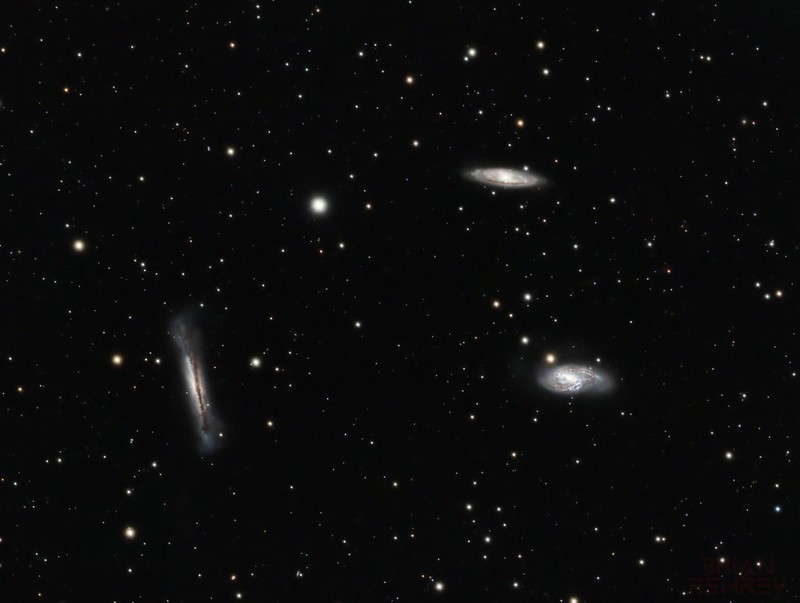 The HII signal present in Orion surrounds the reflection nebula with such a peculiar shape. 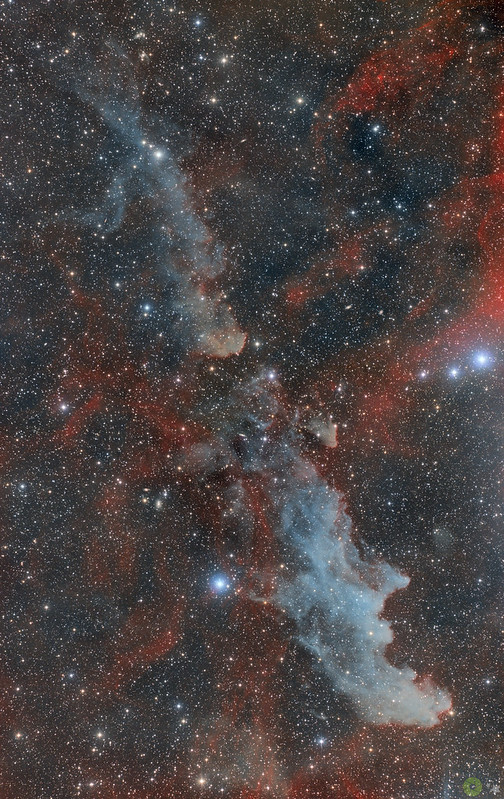 Flaming_Star_Nebula_33_frames_300s_iso3200_115_6D_Lenhance-Starnetpps.jpg
You do not have the required permissions to view the files attached to this post.
Top 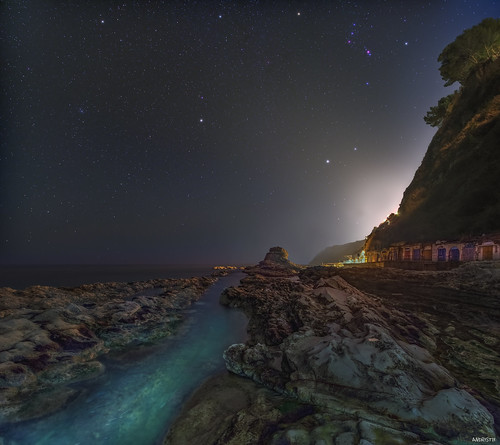