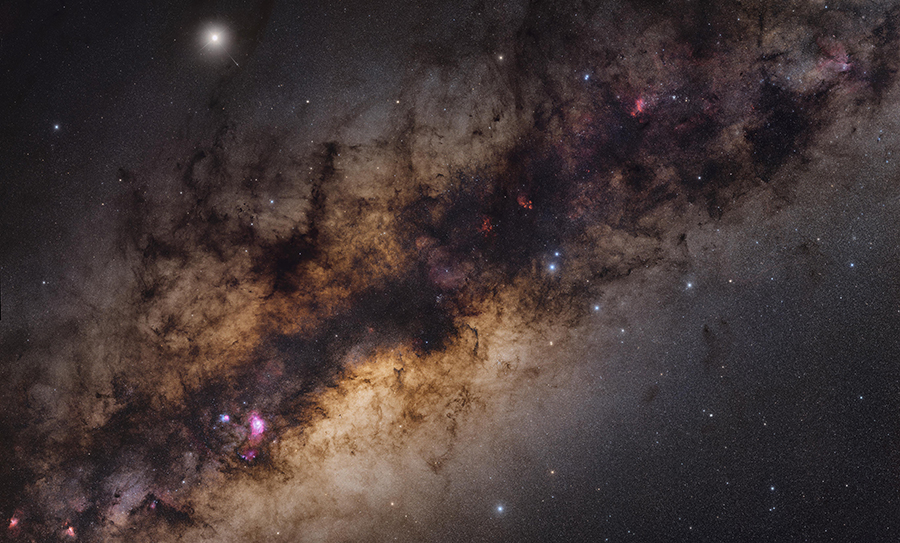 This is mosaic image composed of 110 panels. As the photographic trip was not long enough, 2 telescopes were mounted on NJP together for time efficiency.

Registering the Milky Way Arch over the Devil's Throat, at Iguazu Falls/Brazil, was an incredible experience. In addition to the great adventure of walking through the Iguaçu National Park at night, home of jaguars and pumas, being close to the most impressive waterfalls in the world and feeling all the power and beauty of nature was an experience of a lifetime.

Telescope：ASA10" (F3.6)
Equatorial mount：Paramount MyT
Camera：Canon Ra
Exposure： 115 X 300s at 800ISO and 135 x 300s at 1600ISO
Processing：AstropixelProcessor, Photoshop, PixInsight
Photographer：Thomas LELU (FRANCE)
You do not have the required permissions to view the files attached to this post.
Top

Cristina Cellini
ngc3344_20210307.jpg
You do not have the required permissions to view the files attached to this post.
Top 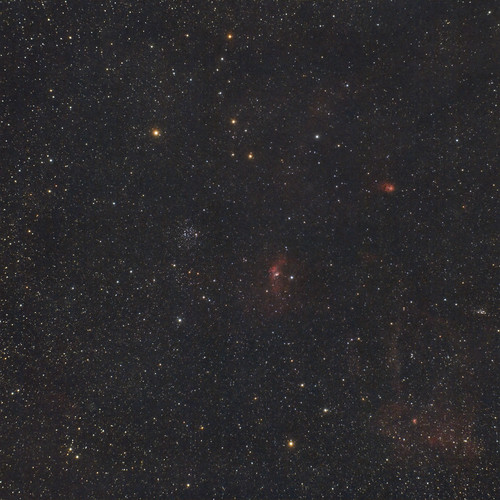 My bad, pressed the Submit button instead of Preview! This image is the one without annotation and here is on with it: 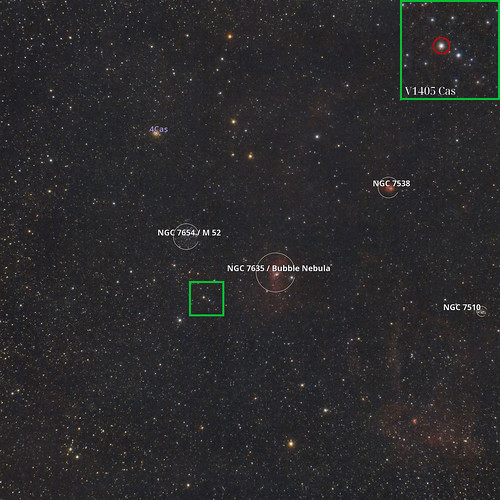 Description:
In the light of the recent news about a nova going off in the Cassiopeia constellation, a desire to photograph it appeared. Sadly, weather is not permitting currently in the Republic of Moldova. So I asked my good friend living in California, Tara Mostofi, to shoot it for me and I would take care of processing it. We have very similar setups (same mount and OTA, but different cameras), which means that I would get a similar result. Only 14 proper light frames were collected, but it was enough to create a nice picture and actually capture the nova! It's not our first collaboration project and it feels exciting to know that even bad weather can be overcome. For technical details please check out the Flickr links above!
Top

The moon is usually seen in subtle shades of gray or yellow.
The different colors are recognized as corresponding to real differences in the chemical composition of the lunar surface. Blue tones reveal areas rich in ilmenite, which contains iron, titanium and oxygen, mainly titanium, while orange and purple show regions relatively poor in titanium and iron. 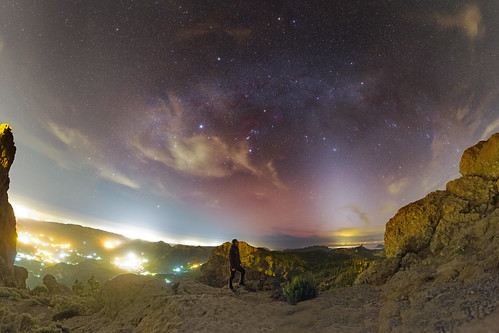 From NASA: “M100 is a stunning example of a grand-design spiral galaxy. This detailed Hubble image reveals individual stars within the galaxy’s prominent spiral arms. These dusty structures swirl around the galaxy’s nucleus and are marked by a flurry of star formation. M100’s characteristic arms also host several small black holes, including the youngest one ever observed in our cosmic neighborhood.”

The hydrogen regions, shown as red color, are placed on a previous observations and photography from the Earth. At this moment, this is one-of-a-kind photo of M100 from HST (Hubble Space Telescope). The processing took me over 4 hours and required precise masking and sensitive work with red (hydrogen) regions, which were not included in the original HST data.

Besides standard process with background calibration, color calibration, noise reduction, nebulosity and HDR toning, I also had to repair that "dual sensor" stripe, which cuts photo in a middle. Hydrogen regions was added to a Red channel, with a region masking. As a reference, I used photo of the M100, which was taken by the ESO VLT. That helped me to registry, where exactly are those Ha regions, so I could place them correctly. 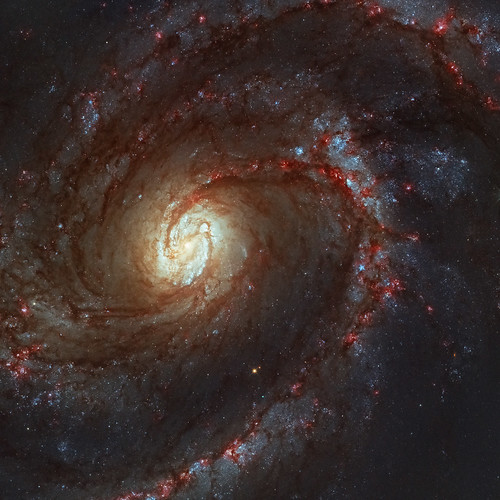 M100 with Hydrogen regions by Robin Onderka, on Flickr
Top

Nova Cassiopeiae 2021: Before and after

Disclaimer: no guarantee on the circled star being the nova which we observe right now!
The creation of this image involved 3 persons: Tara Mostofi (shooting the photo on the right before the dawn on 21st of March), Alexandru Barbovschi (processing the photo on the right) and Dan Vanderzanden (author of the image on the left). There is an animation as well (click on it to view it in motion): 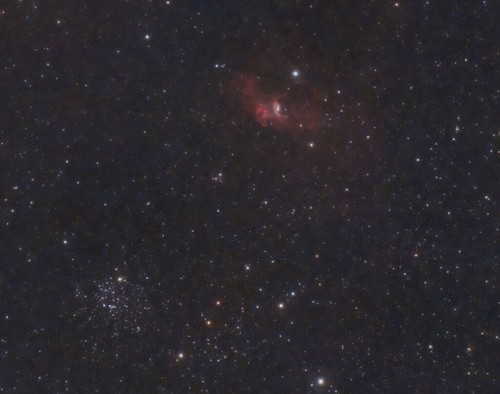 The Keyhole to the Carina Nebula 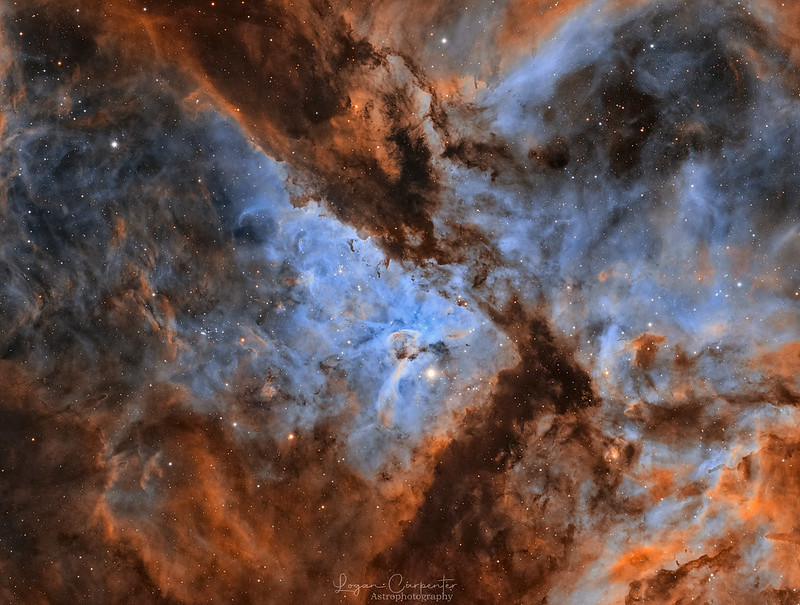 Carina Nebula.
The Carina nebula is a large complex area of bright and dark nebulosity in the constellation Carina and lies approx 8,500 light years from earth. The nebula is one of the largest diffuse nebulae in our skies. Although it is four times as large as and even brighter than the famous Orion Nebula, the Carina Nebula is much less well known due to its location in the southern sky (ref Wiki)
Credit: Logan Carpenter
Location: Auckland, New Zealand
Telescope : Skywatcher Esprit 120ED
Camera: ASI1600mm pro
FIlters: Optolong 2" Ha, Oiii and Sii
Integration: 10.6 hours (combination of 5min and 10min exposures)

Heart Nebula (IC1805) captured in narrowband from my garden in Somerset, UK. (Bortle 5). Processed in a modified SHO palette to bring out reds.

Heart.jpg
You do not have the required permissions to view the files attached to this post.
Top

The lockdown of COVID-19 pandemic let me discover lots of new photo locations in walking distances near my home. For example: I just realized that despite the 13 km distance, I don't need to travel for capturing great shots about Megyeri bridge, the northernmost and youngest one of Budapest. This photo sequence was taken the evening of 2021-03-15 as the 56-hour-old waxing crescent Moon is setting above the bridge. 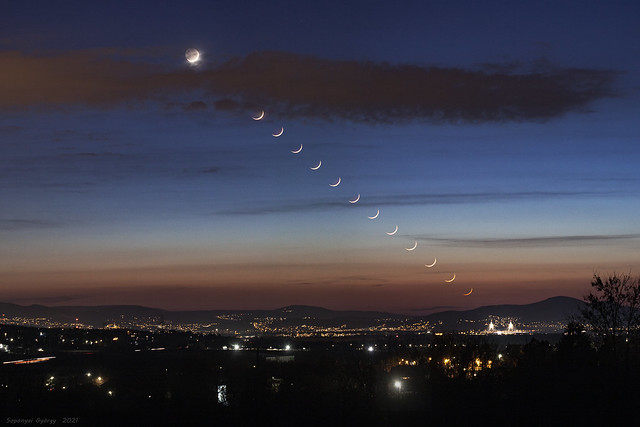 From NASA: “NGC 5793 is a spiral galaxy over 150 million light-years away in the constellation of Libra. This galaxy has two particularly striking features: a beautiful dust lane and an intensely bright center — much brighter than that of our own galaxy, or indeed those of most spiral galaxies we observe.

NGC 5793 is a Seyfert galaxy. These galaxies have incredibly luminous centers that are thought to be caused by hungry supermassive black holes — black holes that can be billions of times the size of the sun — that pull in and devour gas and dust from their surroundings.”

Processing, I downloaded set of channels used for color (475nm and 775nm) from Hubble Legacy Archive. I also created an artifical Green channel for possibility of RGB combination. Standard Pixinsight workflow bring me to this final image, with a lots of cosmetic corrections that was present on the RAW files. My goal was to create very deep-sky looking image with dark background and just galaxy in it. 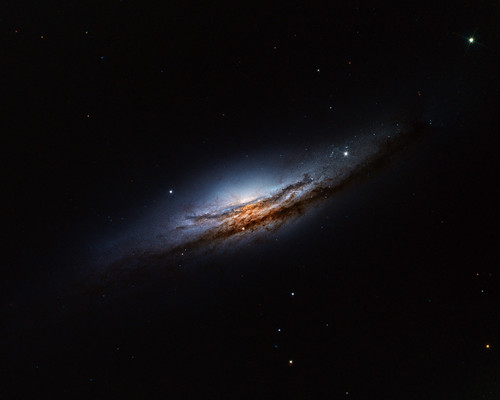 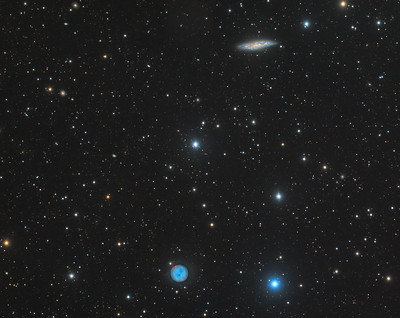 IC5146_wide.jpg
You do not have the required permissions to view the files attached to this post.
Top

IC410 HSO
Also called the tadpole nebula ...
These tadpoles are found swimming in a cosmic pond of gas and dust. The cloud, partially obscured by dust in the foreground, surrounds NGC 1893, a young cluster of stars whose radiation causes the gas to glow. The region is home to major star formation processes generating large mass stars. Tadpoles, composed of denser and colder gas and dust, extend for about 10 light years and new stars could be born inside them. Their gaseous tails, sculpted by winds and radiation from massive newborn stars, stretch in the opposite direction to the central region of the cluster. IC 410 is located about 12,000 light years away in the direction of the constellation Auriga 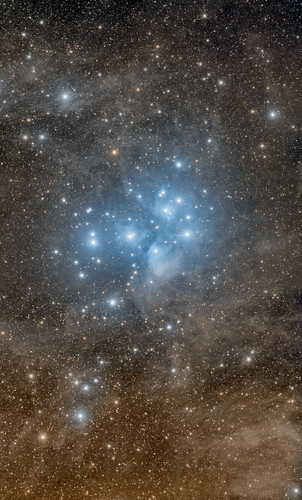 I setup a timelapse to shoot the Milky Way rising over the Andes and lighting hundreds of miles away over Argentina cause an incredible atmospheric phenomenon called a Sprite. The red glowing structure is one type of Transient Luminous Event (TLE) cause by thunderstorms and occur between altitudes of 12 to 60 miles!

Milky Way and a Sprite (TLE) over the Andes
www.mattdieterich.com
Copyright: Matt Dieterich 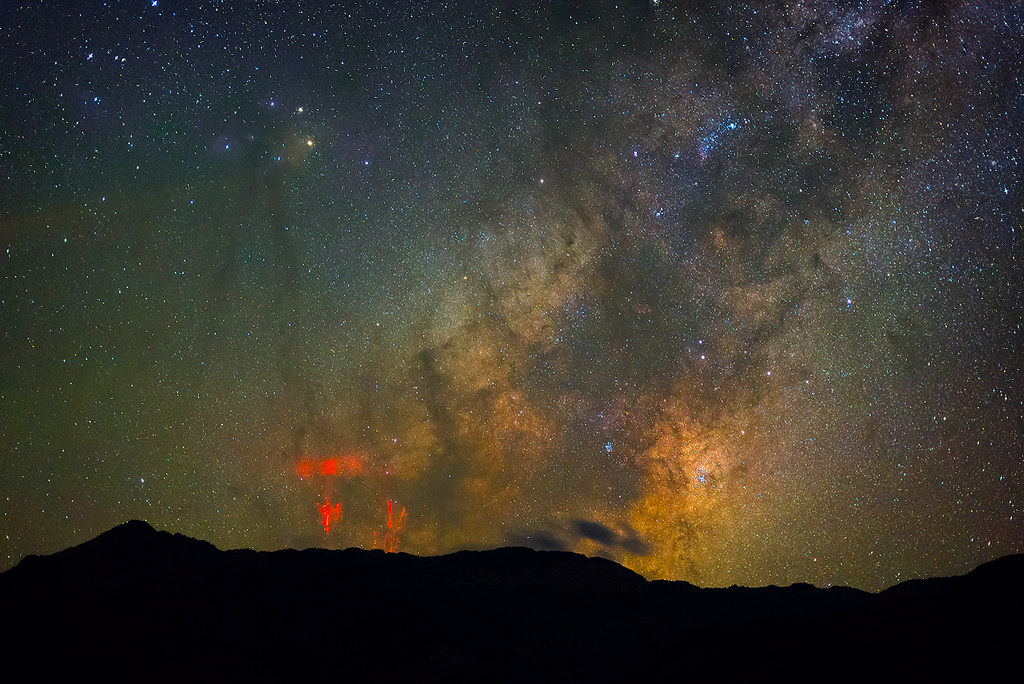 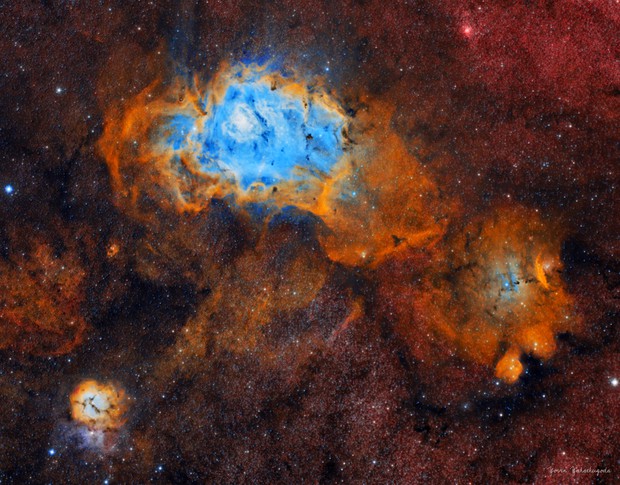 Thanks for looking!
Dave Doctor
You do not have the required permissions to view the files attached to this post.
Top
109 posts