I would like to share with you my recent work on this region of the Cassiopeia constellation. This image is the result of combining a 12 pane H alpha mosaic and a 8 pane RGB mosaic, reaching a total exposure of 43h30min. All the data was captured back in 2017 and has been processed this May 2021.

Link to the full resolution image and details: 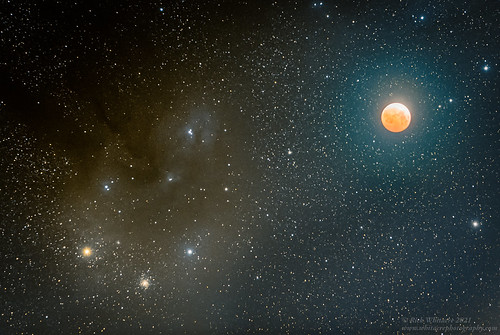 Taken by myself from Bortle 3 skies on a dark desert highway in Northern California (near Little Panoche Reservoir). Canon Eos Ra in 1.6 crop mode, Canon 70-200mm lens at 135 mm on SkyWatcherStar Adventurer star tracker, 30s exposures, f 2.8, ISO 800 taken 26 May 2021 between 4:09 am and 4:27 am to expose for the Rho Ophiuchi complex, then at 4:27 am 3s exposures ISO 200, f2.8 to expose for the eclipsed moon. Planned with Stellarium and Xavier Jubier’s lunar eclipse time exposure calculator. Camera controlled with APT.
I saw the Milky Way appear naked eye during the partial phases of the eclipse. It was a mind-blowing experience!

Digitally processed by Alexandru Barbovschi from Chișinău, Republic of Moldova. Pre-processed with darks using Siril. Stacked 34 frames of 30s to get Rho Ophiuci (and trailed overexposed Moon) Stacked 9 frames of 3s to get a properly exposed Moon (and cut it off from there). Rho Ophiuci post-processed in RawTherapee and sent through StarFixer. Final composite made in Gimp. 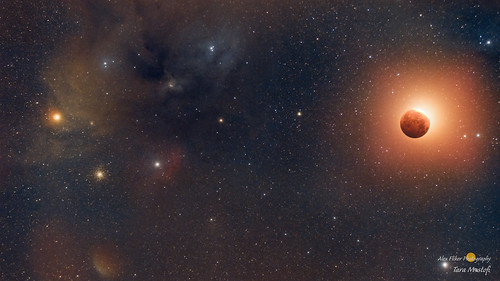 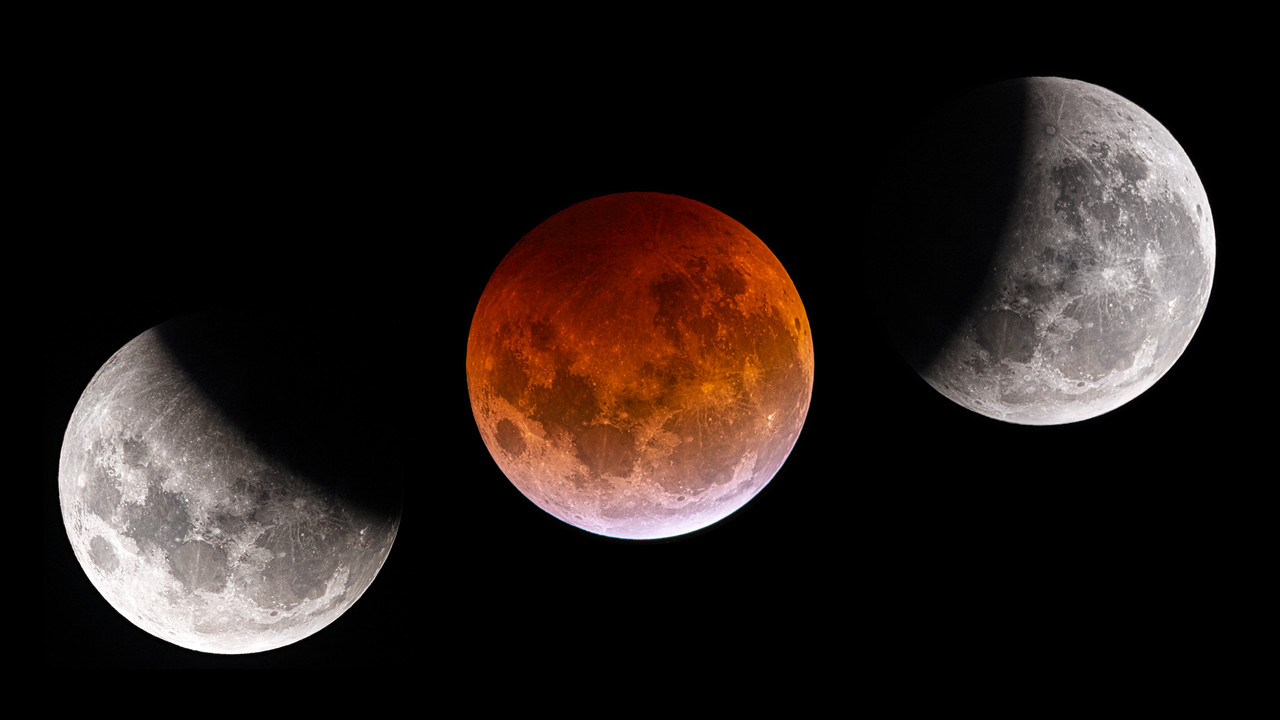 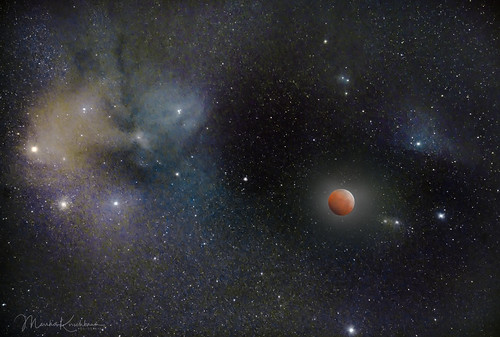 In Space with Rho and the Eclipsed Moon by Marsha Kirschbaum, on Flickr

Ever since I first saw this “cloud” complex imaged, I fell in love with it – it’s colorful, gaseous, abstract beauty is contained in the constellation Scorpius. It is punctuated by the bright stars beginning with yellowish Antares (left, middle border of image), and continuing counter clockwise, Crab Globular Cluster, Alniyat, oSco and iSco that form a kind of 5 pointed circle. To the upper right of the eclipsed moon about 2 o’clock is another gaseous cloud, somewhat triangle shaped, and the bright star Jabbah.

I knew this image would be a challenge to capture and process because, even eclipsed, the light of the moon would still overpower the much further away details of the cloud complex.

On a star tracker, 10, 30 second light frames or “regular” photos imaged at ISO 16000, were stacked and processed with flats in Sirl to bring out the details of Rho. The moon is a single image at 1/10 second, ISO 8000, also tracked, taken just before the 30 light frame second sequence. It is blended with the 30 second stack in Photoshop in the same position as seen in the sky at that time. Further editing done in Lightroom.
Top

The attached is a composite image taken over a few minutes at lunar totality on 26 May, 2021, around 12:20 UTC. The location is at Morro Rock in Morro Bay, CA, USA. There was low fog in the area that cleared about 45 minutes before totality and moved back in as the moon set behind the rock - perfect timing!

Two cameras were used, a Canon EOS RP for the wide angle and a Canon ESO 80D (4x the focal length, 200mm) for the moon. 3 wide images were stacked separately for the land and for the stars, and 2 images from the near angle were stacked and then reduced to the wide image scale. These 3 stacks were composited, along with a single image of the trawler moving thru the scene at the lower left.
You do not have the required permissions to view the files attached to this post.
Top

This image is taken from Tres Cantos (Madrid) in remote connection with Namibia via
https://skygems-observatories.com/

high resolution
https://www.astrobin.com/j9gh4h/?nc=user
You do not have the required permissions to view the files attached to this post.
Top
83 posts