Centaurus A, also known as NGC 5128 or Caldwell 77, is a galaxy in the constellation of Centaurus. It was discovered in 1826 by Scottish astronomer James Dunlop from his home in Parramatta, in New South Wales, Australia. NGC 5128 is one of the closest radio galaxies to Earth, so its active galactic nucleus has been extensively studied by professional astronomers. The galaxy is also the fifth-brightest in the sky. 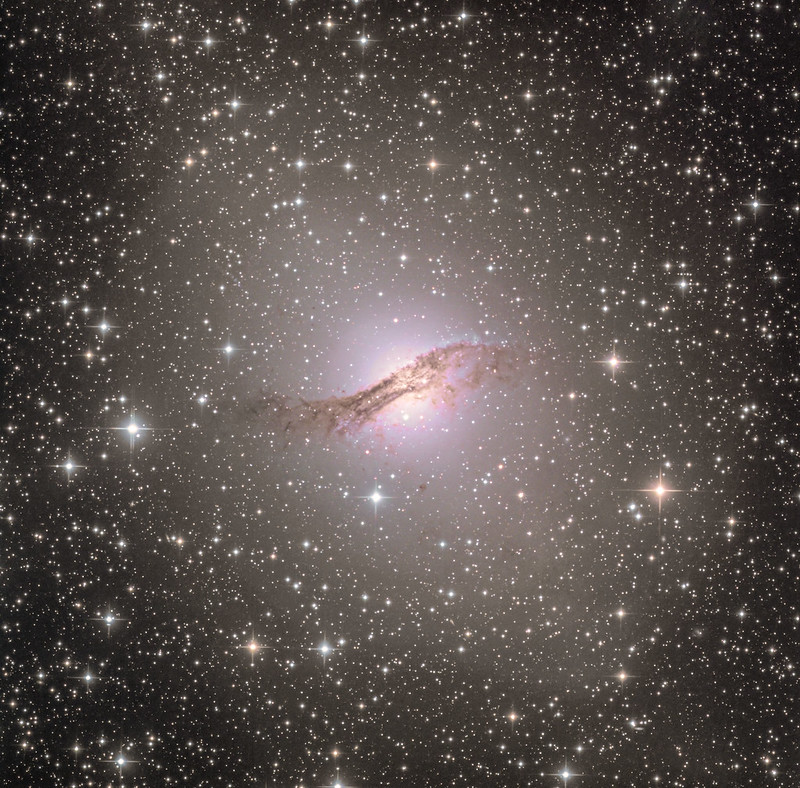 I share this composition, which corresponds to a flock of swallows that were crossing the sun at that moment.
In the sun you can see the sunspot AR2835 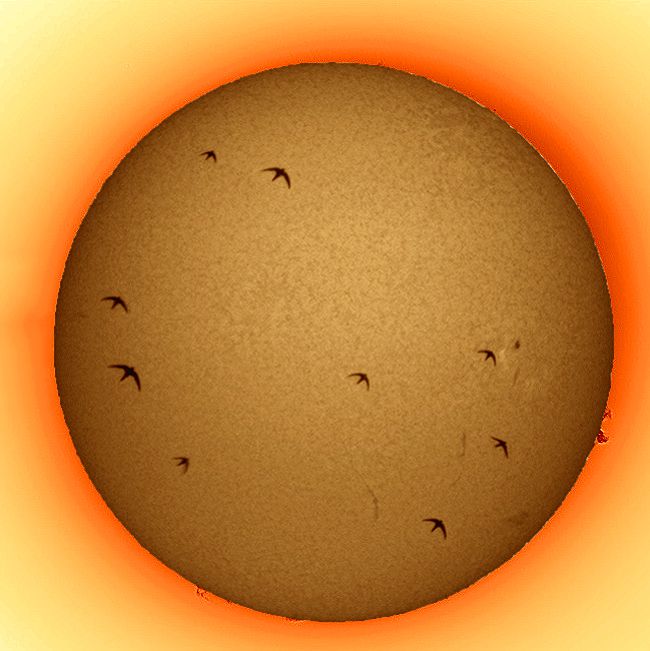 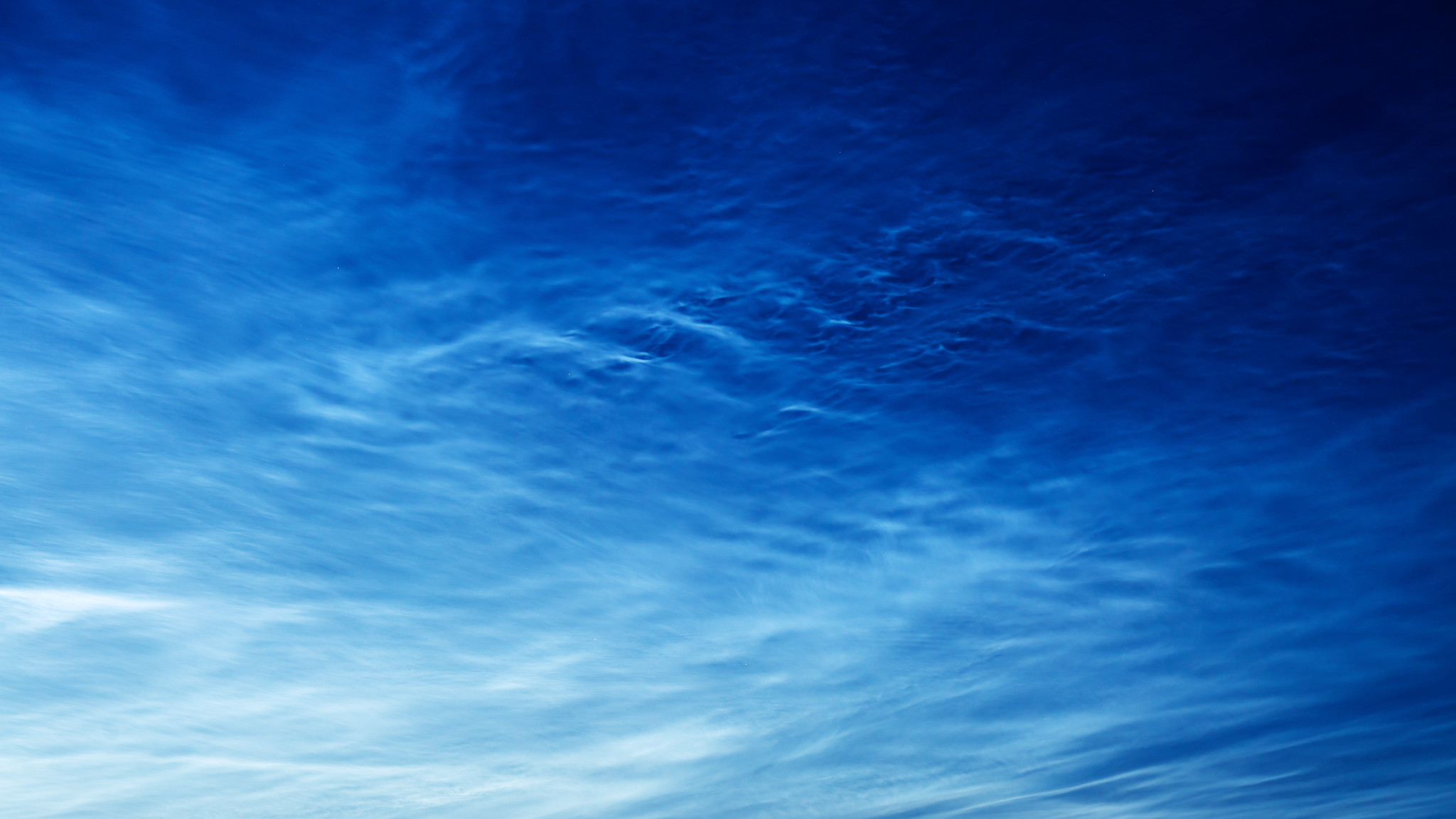 On the night of June 27/28 there was a spectacular display of Noctilucent Clouds over the north of Scotland. At times it covered more than half the sky. Here is a close up view showing some of the complex and beautiful detail visible that night. The 1.6 second exposure was captured at 01:07 UT on June 28 from Elgin, Moray, Scotland.

NGC 5256 is a pair of galaxies in its final stage of merging. It was previously observed by Hubble as part of a collection of 59 images of merging galaxies, released on Hubble’s 18th anniversary on 24 April 2008. The new data make the gas and dust being whirled around inside and outside the galaxy more visible than ever before. 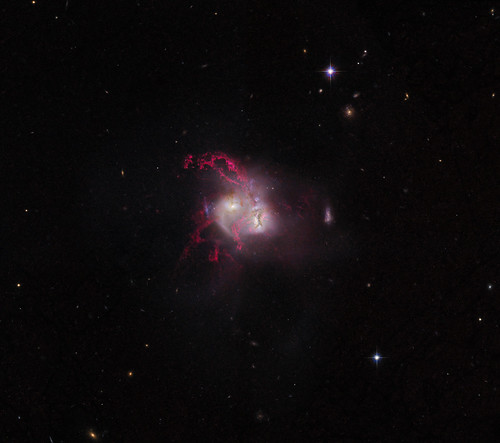 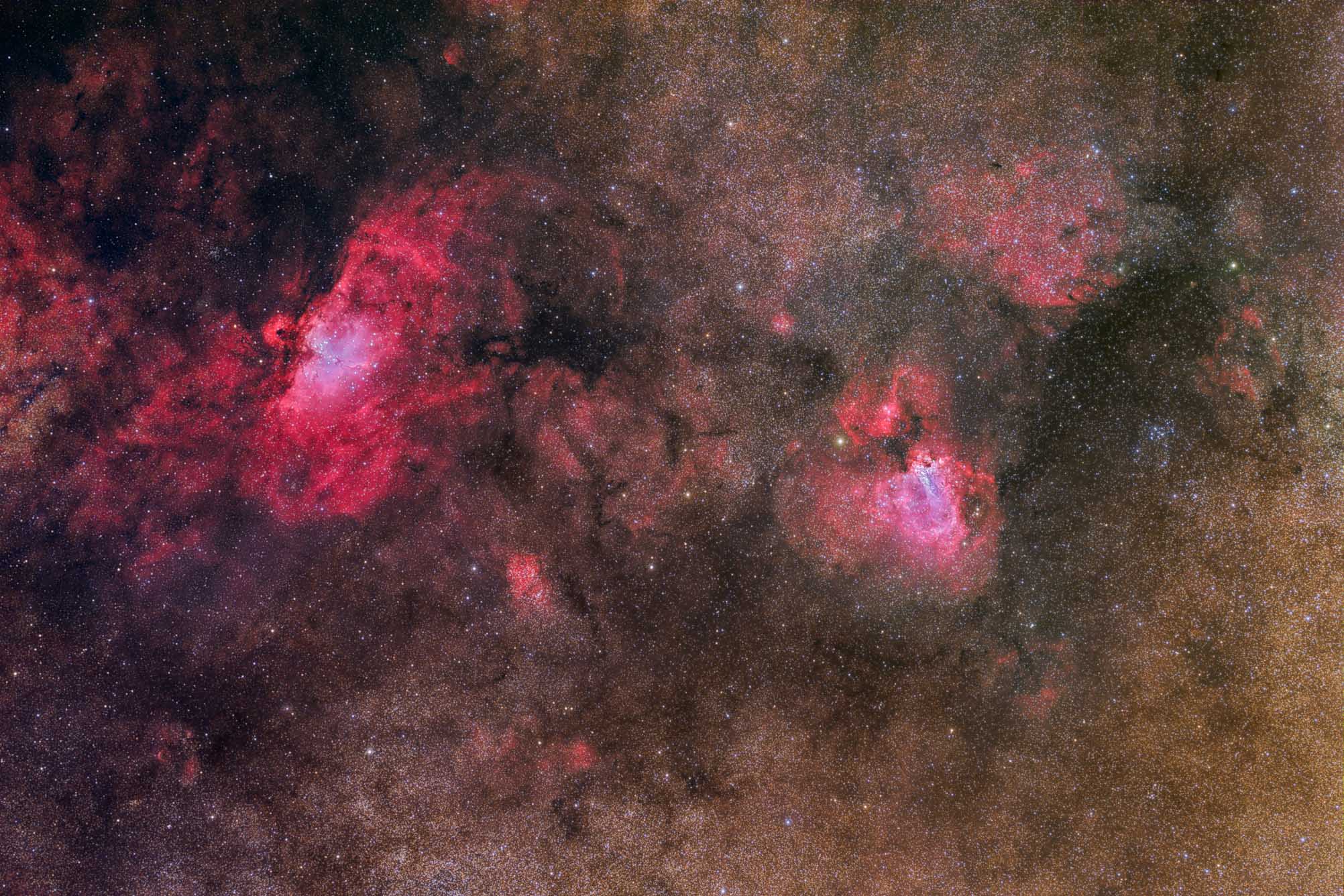 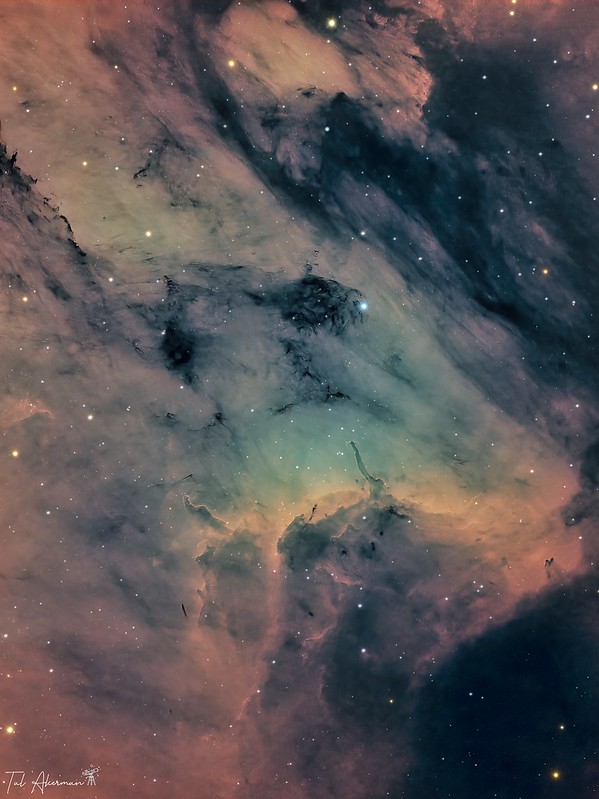 This was one of my projects I have enjoyed the most as everything just worked !
Ha and Oiii were taken in 3 nigths straight, and Sii was taken about 2 weeks later due to weather conditions.
My wife said - "I want a picture to hang on the wall, but make it pretty with a lot of warm colors"
And I said - "Say no more, I got you"
The final data was so good, that I had the freedom to take to whatever "artistics" places I want, a oh boy that was fun!
This somehow looks like a painting from outer space, and I really glad I did not go with the conventional SHO colors.

IC 4604 is a large, blue reflection nebula located in Ophiuchus. The nebula is illuminated by Rho Ophiuchi, the triple star in the center of this image. This object is part of the Astronomy League Bright Nebulae Program. 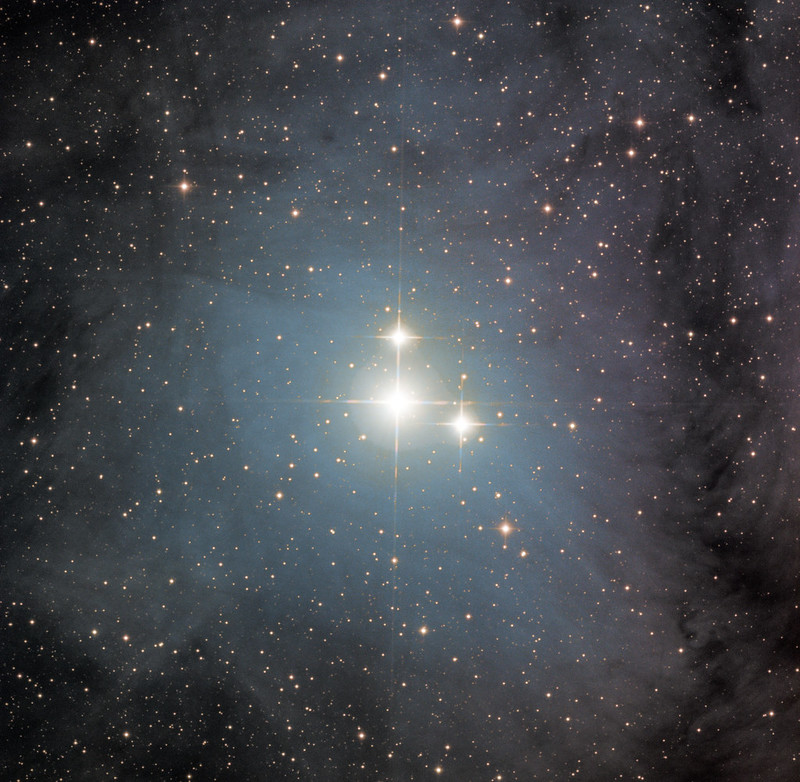 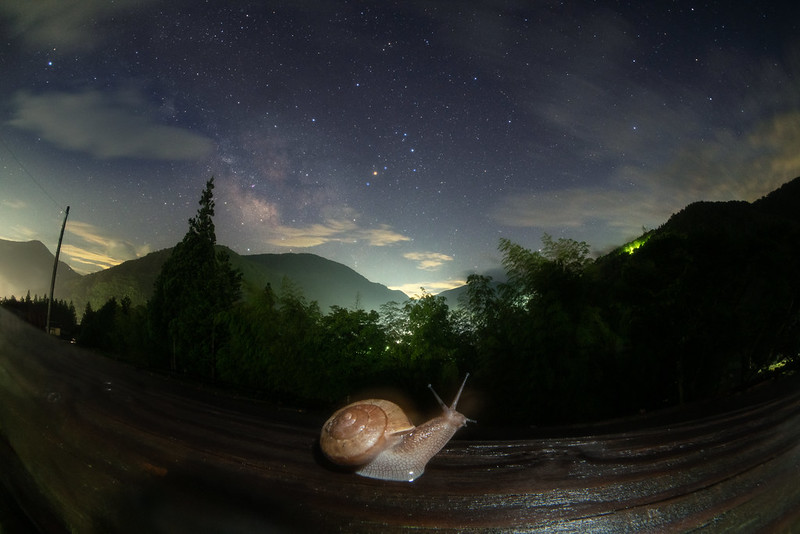 Spiral snail and galaxie by MASAHIRO MIYASAKA, on Flickr
Top

NGC2403 is a spiral galaxy in Camelopardalis. NGC2404 is one of many large HII region inside the galaxy.

The image is calculated with and without H-alpha information. By toggling between the two variants the correlation between HII gas clouds and bluish regions (containing young stars and probably also OIII gas) can be visualized.

Click on the animation for detailed information and full resolution pictures. 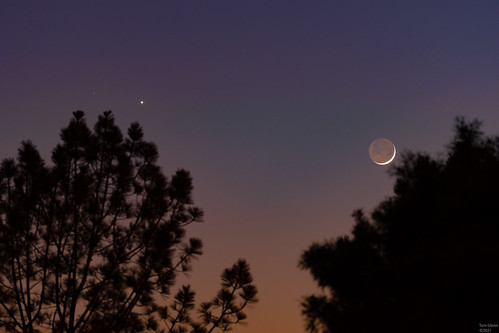 Young crescent Moon with Venus and Mars by Tom Glenn, on Flickr

The young crescent Moon (4.4% illuminated) sets along side Venus and Mars. Although typically thought of as "nearest neighbors", neither Venus nor Mars are particularly close to Earth right now, at distances of 215 million km and 371 million km, respectively. Interestingly, Mercury (not visible here) is only 151 million km away from Earth, much closer than either Venus or Mars. And the Moon is 390,000km away at the time of this image. Image captured at 20:50 PDT from San Diego, CA on July 11, 2021, using a Nikon D5600 and 70-200mm lens at 135mm. Single exposure of 2s, f/2.8, ISO 100.
Top

Located in the constellation of Hercules, about 230 million light-years away, NGC 6052 is a pair of colliding galaxies. They were first discovered in 1784 by William Herschel and were originally classified as a single irregular galaxy because of their odd shape. However, we now know that NGC 6052 actually consists of two galaxies that are in the process of colliding.
A long time ago gravity drew the two galaxies together into the chaotic state we now observe. Stars from within both of the original galaxies now follow new trajectories caused by the new gravitational effects. Eventually things will settle down and one day the two galaxies will have fully merged to form a single, stable galaxy.

When first released, this image was processed in a way that did not show the H-alpha regions clearly. I thought these regions were an important part of the galaxy, so I tried to bring them out as best I could.

Processing was done in pixinisight. 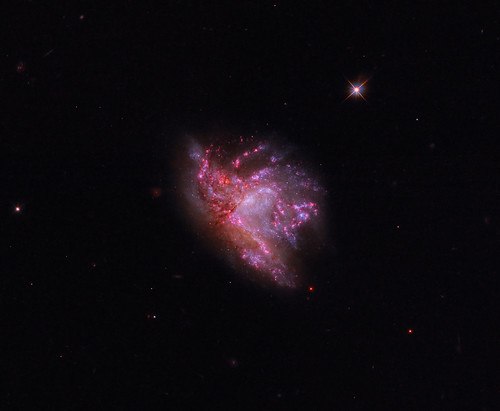 A new look at NGC 6052 by William Ostling, on Flickr
Top

Dragons of Ara - HaRGB.png
The Dragons of Ara is a notoriously faint emission nebula located in the Milky Way arch close to the iconic constelation of Scorpion. Although I used the Ha to enhance the nebulosity, the Dragons of Ara aren’t an easy target, especially when shooting from the inner city under light polluted skies. Despite all the challanges, I think I managed to get a decent natural looking color balance. 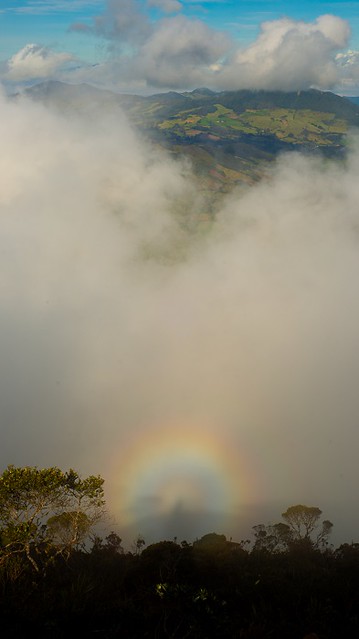 Comet NEOWISE thru dawn noctilucent clouds
Comet Neowise.jpg
You do not have the required permissions to view the files attached to this post.
Top

This is M51, the iconic Whirlpool Galaxy, but for the the star of the show (no pun intended!) is how this pair of galaxies almost makes gravity something you can see. The ballet of gravitation interaction, while frozen in time, feels active and full of motion.

This is 21 hours, 20 minutes of HaLRGB data taken with a Planewave CDK14/FLI ML16803 that is at Sierra Remote Observatories. Data was collected from late June 2021 to mid-July. The system is run by an imaging team consisting of myself (Linda Thomas-Fowler), Timothy Triche, John Kasianowicz and Gowri Visweswaran. Processing on the image was done by me.

1st of 3 objects for the July Dark cycle.

This object got my attention from a 58 hour multiple-exposure capture by Mark Stiles using a Skywatcher MN190...

I was curious if I could get similar results in just a few hours using only 5-minute exposures in Ha, OIII, R, G and B.

The 16803 CCD could not do it. It would require many hours of both 15 minute and 5 minute exposures to capture both the faint outer halo without over exposing the core.


"When observers look directly at Caldwell 15 through a small telescope, they typically see only the nebula’s sparkling-white central star. However, by averting one’s gaze, glancing away from the central star, the nebula's bulbous dust clouds come into view. This optical trickery earned this planetary nebula the name the "Blinking Planetary.”

The Blinking Planetary’s bright, white remnant star — known as a white dwarf — is surrounded by a greenish orb of gas and dust, the outer layers of the burned-out star that jettisoned into space. This cloud is flanked on both sides by bursts of red gas called FLIERS, or fast low-ionization emission regions. In these relatively young features, electrically charged atoms shoot off into space at supersonic speeds.

Also known as NGC 6826, Caldwell 15 is about 2,200 light-years away from Earth. Young and small, the planetary nebula is only about a thousand years old and less than half a light-year across."

https://www.astrobin.com/enu7t1/
You do not have the required permissions to view the files attached to this post.
Top

M8 and M20 Summer peak in Canada, because these objet are low on the horizon. With a good sky M8 is possible to see with the naked eye. 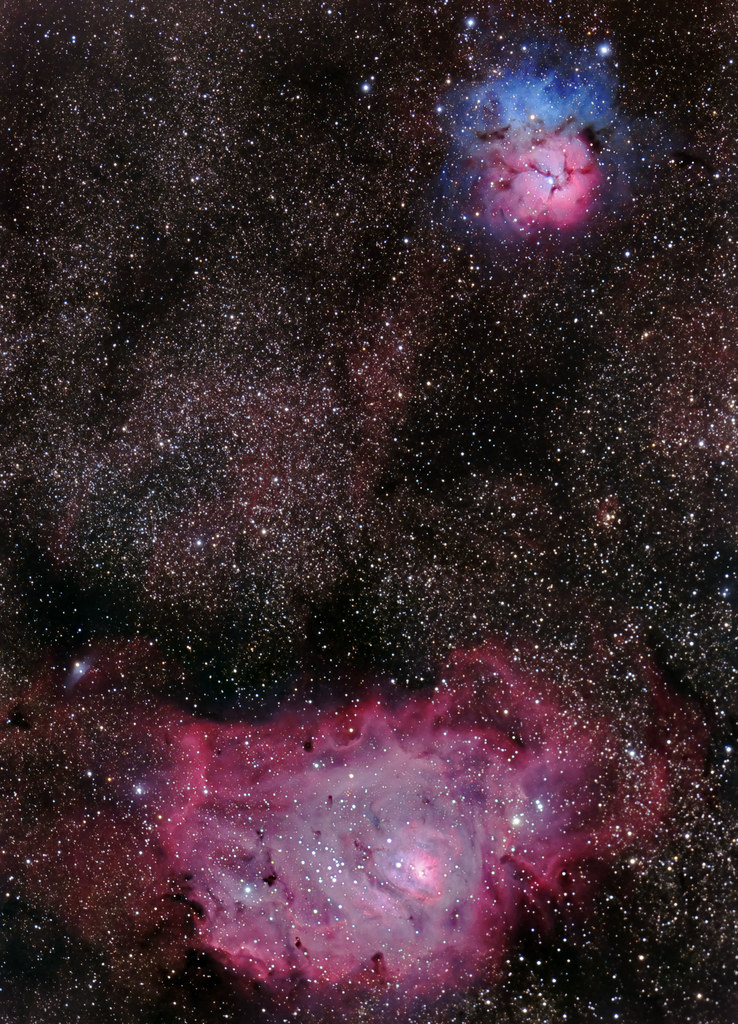 Reflection of Messier 4 in a Satellite? 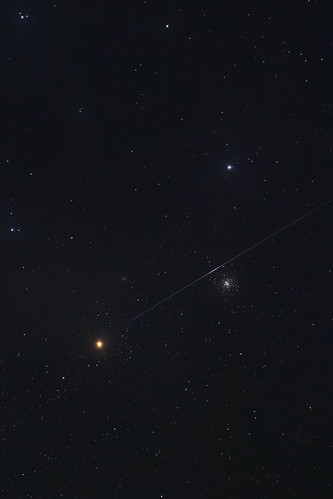 Capturing a series of images of the sky around the star Antares I noticed a satellite trail in one of them. The trail looks as if the satellite reflected light coming from the Messier 4 globular cluster into the camera. I'm not sure if stars other than the sun can produce visible reflections in objects orbiting the earth, but this picture suggests that it is possible.
Top

The previous eight years I completed numerous analemma projects in order to record and present the famous "Celestial Eight". With this newest (and probably the last) photo I would like to present a new aspect of this wonderful astronomical phenomena. Due to the COVID-19 pandemic and the lockdown last Summer I decided to use this meadow as foreground of the photo. Ten minutes of walk from my home, absolutely no danger of infection.

I recorded the celestial path of the Sun every 40 minutes from sunrise to sunset three days after Summer- and Winter Solstices. Also recorded the "dots" of the Eight-curve at local noon (11:44) from 2020-06-24 to 2021-05-21. At last I added these captured Solar disks to the foreground image that was taken on 2020-09-05, four days after the Sun had left the crossing point of the analemma. 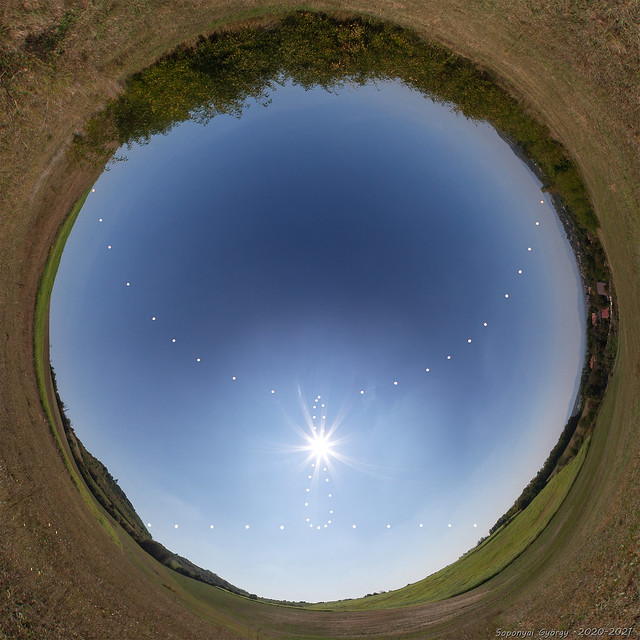 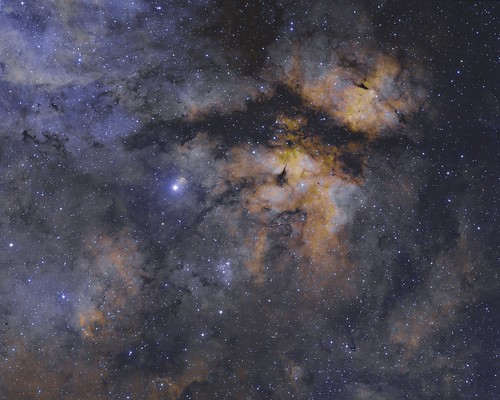 Sharpless 115, the faint emission nebula, lies along the edge of one of the outer Milky Way's giant molecular clouds, about 7,500 light-years away. The nebular glow is powered by hot stars in star cluster Berkeley 90. The cluster stars are likely only 100 million years old or so and are still embedded in Sharpless 115.

SH2-116 is a small nebula, also known as Abell 71, was first classified as a planetary nebula but recent studies show it to be an HII region instead, and is classified as an emission nebula. The nebula surrounding SH2-116 is part of SH2-115.


This image was generated, first by downloading the R, G and B fits images of M42 from the HST legacy archive. The images were:

Processed by me: P.I. PCC

Copyright: Daniel Pasternak ©
You do not have the required permissions to view the files attached to this post.
Top
114 posts