Here we are on the Italian south of cost of Salento.
In the picture you can see Cassiopea and Perseo constellations, near by the radiant point of Perseids meteors.
All meteors were shot during the nights of 12-13-14 August, during peak.
Easily you can see Andromeda Galaxy. 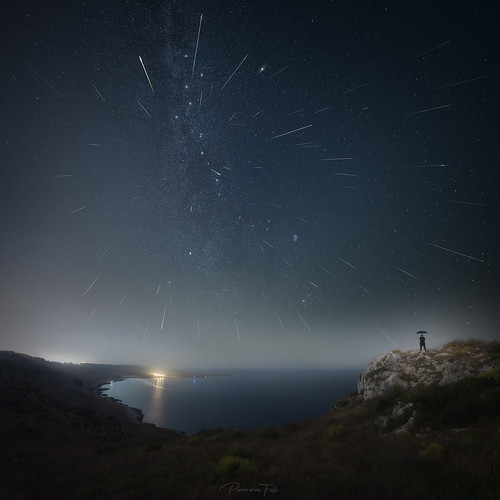 Perseids 2021 Meteor Shower by Pierandrea Folle, su Flickr
You do not have the required permissions to view the files attached to this post.
Pierandrea Folle

Where the River meets the Sky!
The view from the canyon junction bridge overlooking The watchman and Virgin river is probably the most photographed place at Zion National Park but there is irrefutable pleasure in being there at the right moment before sunset or at dark when the stars and shooting stars shimmer across the night sky. Amidst the vibrant display of Perseid Meteor shower, the Milky Way aligns with the flowing river. An ethereal union! 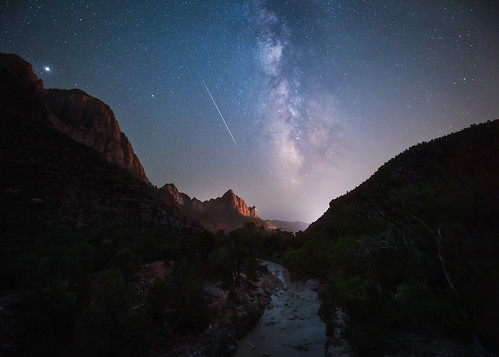 Where the River meets the Sky! by Prashant Naik, on Flickr
Top 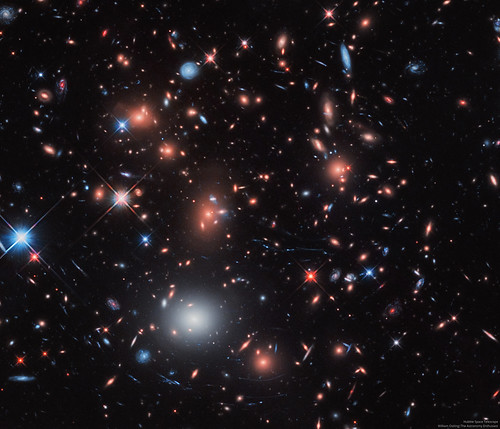 This is the cumulation of 154 Hubble orbits pointing at this cluster!

Looking at the largest elliptical galaxies, almost all of them are disturbed in some way, almost as if they have recently consumed or interacted with a smaller neighbor. The shells which align more or less neatly with the long axis are indicative of absorption of a much smaller galaxy, which seems to be the case for all of the interacting ellipticals. You can almost imagine if time were sped up that this cluster would be a roiling ball of activity with the largest galaxies consistently snacking on smaller morsels. Also visible are many lenticular galaxies, seemingly devoid of star formation but still maintaining some semblance of their past spiral selves.

What is interesting to me is the blue background galaxies. My best guess would be that they are starforming immensely and putting out a lot of ultraviolet light. All that light gets redshifted and shows up in the 435 filter.

This is one of my favorite areas, so I hope you enjoy it! 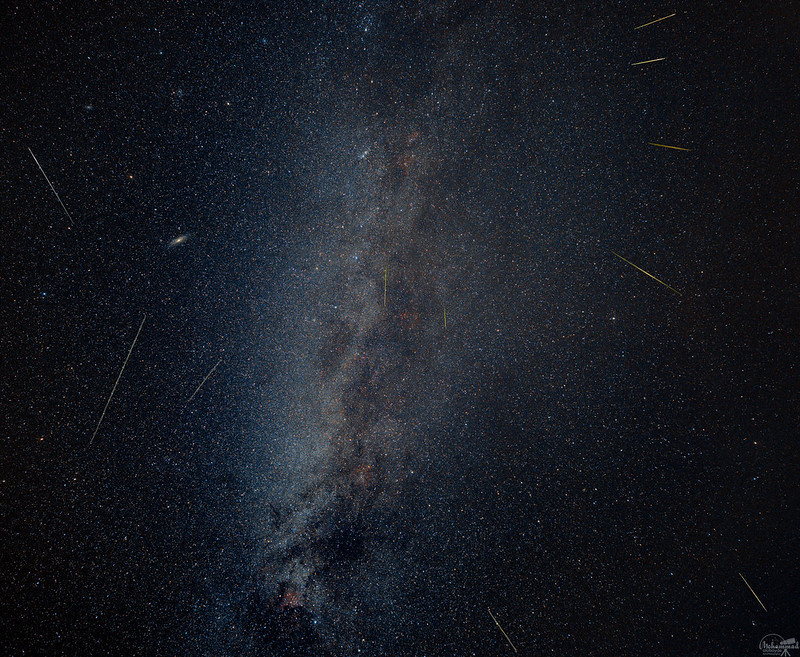 Finally the nights are starting to get dark enough to do some astrophotography again.

Forecast said clouds, but when i went out around midnight, there were clear skies all around and I thought I'd give it a try, since I haven't been able to do any astrophotography since mid-April.
No time to set up a deep-space imaging rig, so I went light. Got my astromodified Canon 700d (T5i), a 16-35mm lens and the Move-Shoot-Move startracker. Cygnus is really high in the atmosphere so I thought that would be a good target. I roughly centered Deneb and just went from there.

The image consist of 61x90s exposures calibrated with darks (no flats). It was stacked in Astro Pixel Processor and post processed in Pixinsight and Adobe Photoshop.

NGC 7538 is a stellar nursery for massive stars. Located around 9,000 light-years away, this is one of the few regions of massive-star formation that are relatively close to us, allowing astronomers to investigate this process in great detail.

Star factories like NGC 7538 consist mainly of hydrogen gas, but they also contain small amounts of cosmic dust. It was through this minor – but crucial – component that Herschel could image these star-forming regions, because dust shines brightly at the far-infrared wavelengths that were probed by the observatory.

With a total mass of almost 400,000 Suns, NGC 7538 is an active factory where stars come to life – especially huge ones that are over eight times more massive than the Sun. Hundreds of seeds of future stellar generations nestle in the mixture of surrounding gas and dust scattered across the image. Once they reach a critical mass, they will ignite as stars. Thirteen of these proto-stars have masses greater than 40 Suns, and are also extremely cold, with temperatures only a few tens of degrees above absolute zero.

https://www.astrobin.com/1sfzwn/
You do not have the required permissions to view the files attached to this post.
Top 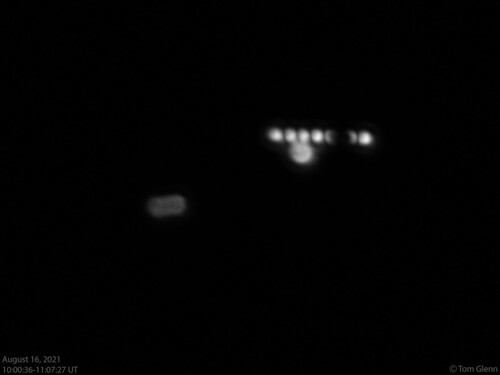 Ganymede eclipses and occults Europa by Tom Glenn, on Flickr

This image shows a mutual event involving several of Jupiter's moons. In this event, Ganymede totally eclipses Europa and then follows with a grazing occultation. Callisto is also visible on the left. This time lapse composite image is composed of 7 frames that were acquired over 1h7m elapsed time on August 16, 2021, from San Diego, CA. I also captured the entire event in 30s intervals and posted that result to YouTube:

Each of the component images of the time lapse is the result of an individual 30s video capture, in which 500 frames are stacked per image. The images were aquired using a C9.25 Edge HD telescope, ASI183mm camera, 1.4x barlow lens, and 610nm filter. Each frame of the time lapse is aligned on Ganymede, and one can appreciate the different relative motions of the other moons at this moment, in addition to the eclipse and occultation of Europa, and also the striking albedo difference of Callisto. For a larger reference frame, here is an image I captured of the Jupiter system taken just a few minutes before the beginning of the mutual event:

My name is Jorge Garcia, an amateur astrophotographer from Spain.

I present for you consideration an image of the Cassiopeia A (CAS A) supernova remmant that is probably one of more imaged by professionals in multiple non optical bands (from X rays to Radio) but not usual for amateurs. My proposal is a crisp view of the nebula using the SOO narrowband palette technique. The image showing the brillant structures in Sulfure II band and Oxygen III that expand at high speed.

I love the story behind this object. In 1680 the Danish astronomer John Flamsteed saw and added to his catalog a star of magnitude 6 which he named 3 Cassiopeia (3 Cas). Over the years, other astronomers like Bailey identified 3 Cas as a Flamsteed error and that star was never observed again. In the first observations of the sky with radio telescopes in the 1940s (Ryle and Graham-Smith) they detected a powerful radio source in the Cassiopeia coastline that they named Cas A.

In the 60s, the optical counterpart of this source was sought and it could be photographed with the Hale 5-meter telescope of Mount Palomar (Baade and Minkowsky). Years of research concluded that it was a remnant of a supernova explosion. The explosion occurred more than 300 years ago, in 1667, which is quite close to the observation and position that Flamsteed gave in 1680.

What was complicated for the 60s even for professional astronomers is now available to amateurs from the home backyard. It has not been easy, but 30 years ago I read about Cassiopeia A and had always thought it was impossible to photograph it

This image has been obtained in two hot nights of August (5-6 of August) and I think it is a good example of high resolution with small telescopes.

The total time of exposure is 10 hours in O-III and SII using sub-exposures of ten minutes. I am working in H-alpha but in this object the emission in this band are very low, probably it requires more of 10 hours.

The telescope used is a Astro Physics 5" telescope (Ap130EDT F8.35). The CCD camera using to perform this image is an ZWO ASI294MM PRO. The image was processed using Pixinsight.

I hope you enjoy it 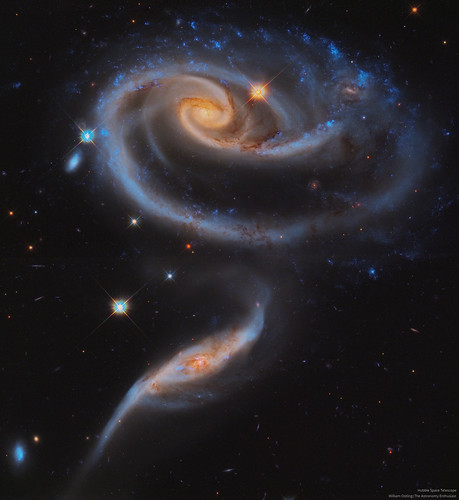 This is one of my absolute favorite galaxies, so I had to take a shot at processing it! The whirling spirals, the dark dust lanes, the beautiful colors – Hubble really picked a great target!

You can view a full write up of my processing on my website: https://theastroenthusiast.com/arp-273-from-hubble/

I hope you enjoy!
Top

Jupiter (Opposition Day) - GRS and the moon Europa casting its shadow on August 19th, 05:03ut.
You do not have the required permissions to view the files attached to this post.
Top

https://www.astrobin.com/rlfwyx/
You do not have the required permissions to view the files attached to this post.
Top 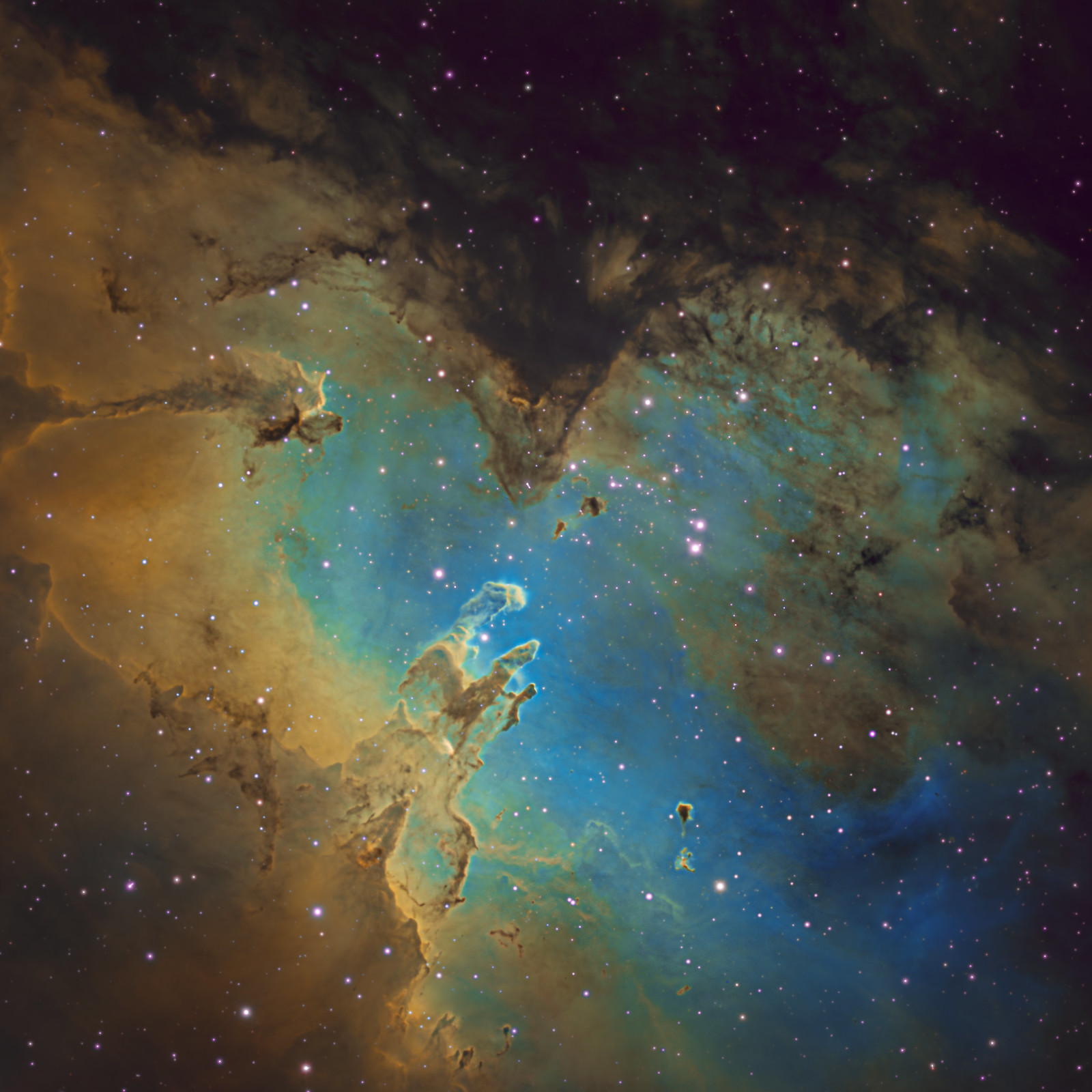 The Eagle Nebula (Messier 16) was made famous by the Hubble image showcasing the "Pillars of Creation". That image has to be one of the most iconic photos ever captured by Hubble and has inspired millions of people.

I'll never forget flipping through books about space while in my elementary school library, never realizing that one day I might have the opportunity to work on photos of the night sky myself.
Top


(c) Patrick Winkler
You do not have the required permissions to view the files attached to this post.
www.celestialobjects.net
Top 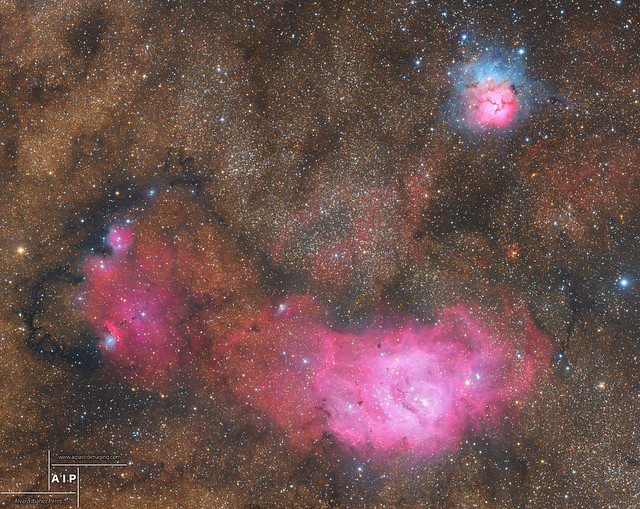 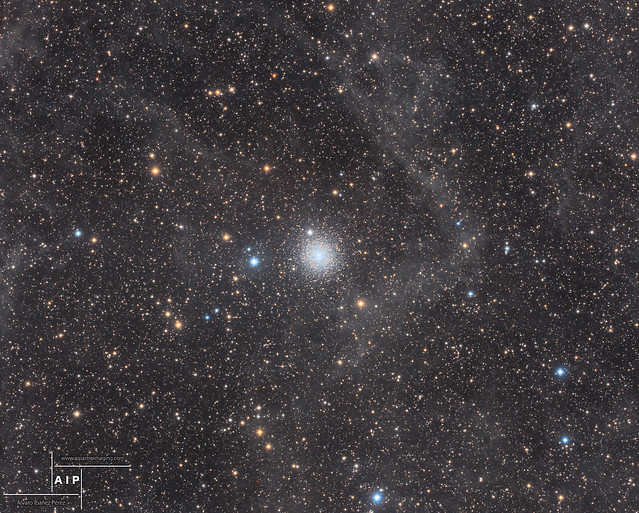 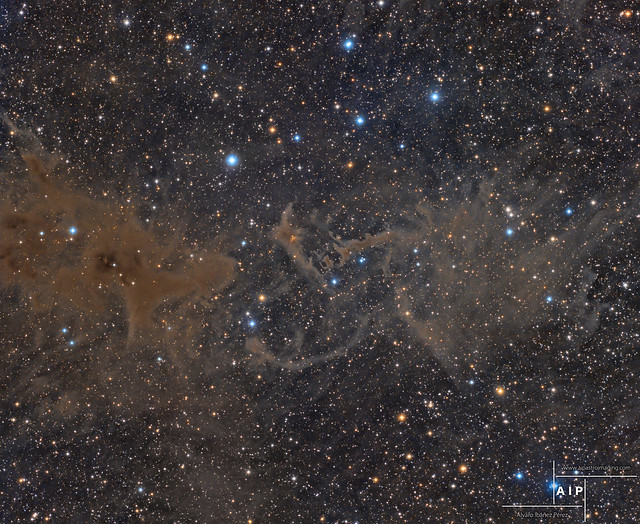 Reworked this data of Melotte 15

For high resolution click on the image on this page: https://www.kinchastro.com/ic-1805---heart-nebula.html
You do not have the required permissions to view the files attached to this post.
Top

(More acquisition and processing details in the YouTube description.)
Top 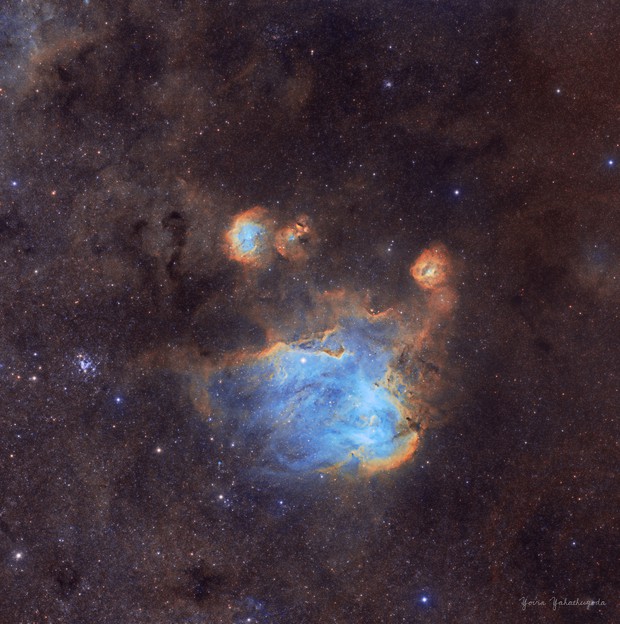 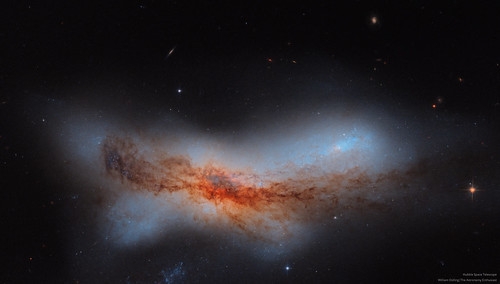 This galaxy is just so bizarre that I had to process it! NGC 520 is the product of a collision between two disc galaxies that started 300 million years ago. It exemplifies the middle stages of the merging process: the discs of the parent galaxies have merged together, but the nuclei have not yet coalesced. It features an odd-looking tail of stars and a prominent dust lane that runs diagonally across the centre of the image and obscures the galaxy.

You can view my full write-up here: https://theastroenthusiast.com/ngc-520-from-hubble/
Top


M23, , large open star cluster located in the constellation Sagittarius.
The cluster lies at a distance of 2,150 light Years from Earth and has an apparent magnitude of 6.9.
Messier 23 can be easily seen with binoculars and is best viewed in small to moderate telescopes.

It was discovered by Charles Messier in 1764. Messier described as:
"A star cluster, between the end of the bow of Sagittarius & the right foot of Ophiuchus, very near to 65 Ophiuchi, according to Flamsteed. The stars of this cluster are very close to one another.”

My_Picture.jpg
You do not have the required permissions to view the files attached to this post.
Top 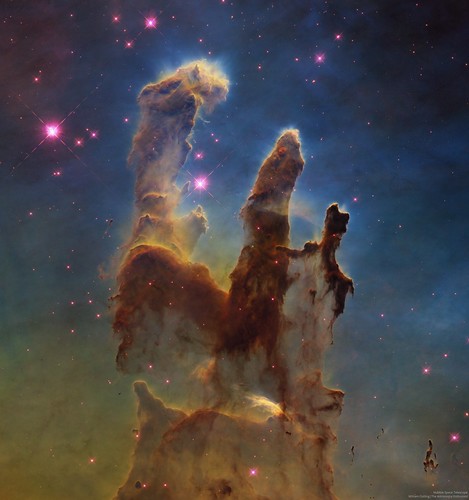 This was a tough image to process – there were a bunch of tiny dark gaps and hot pixels scattered throughout the image. The image file sizes were also quite big, so processing took a long time. Nevertheless, I got a result that I am proud of! The data is just too good to process badly. I have to give so much credit to the HLSP team – they really did a phenomenal job creating this mosaic.

These towering tendrils of cosmic dust and gas sit at the heart of M16, or the Eagle Nebula. The aptly named Pillars of Creation, featured in this stunning Hubble image, are part of an active star-forming region within the nebula and hide newborn stars in their wispy columns.

Although this is not Hubble’s first image of this iconic feature of the Eagle Nebula, it is the most detailed. The blue colors in the image represent oxygen, red is sulfur, and green represents both nitrogen and hydrogen. The pillars are bathed in the scorching ultraviolet light from a cluster of young stars located just outside the frame. The winds from these stars are slowly eroding the towers of gas and dust. 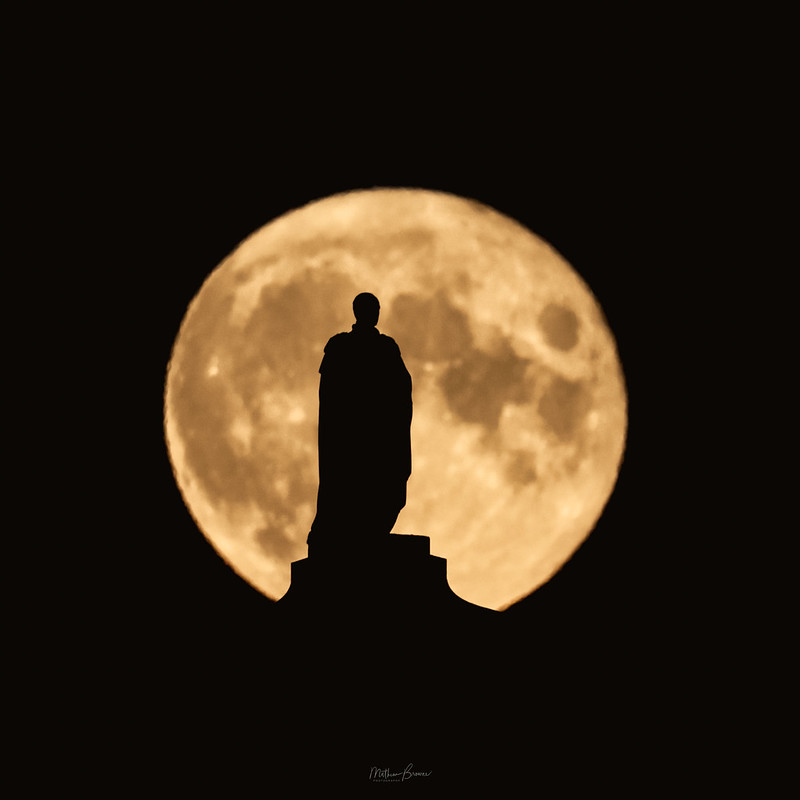 Moonrise behind the Prince Albert statue in Tenby. ⠀
I photographed from North Beach, half a mile away using a 600mm telephoto lens.
Top

Here is my latest image

Andromeda Galaxy Hydrogen Alpha Enhancement
Web Site: www.astroefrem.com
Copyright: Efrem Frigeni
m31apod.jpg
You do not have the required permissions to view the files attached to this post.
mail to : efrem.frigeni@gmail.com
Top

CR 399 BROCCHI'S CLUSTER (ASTERISM)
Brocchi's Cluster (also known as Collinder 399, Cr 399 or Al Sufi's Cluster) is a random grouping of stars located in the constellation Vulpecula near the border with Sagitta.
CR399apod.jpg
www.astroefrem.com
Copyright: Efrem Frigeni
You do not have the required permissions to view the files attached to this post.
mail to : efrem.frigeni@gmail.com
Top
95 posts