When I was young enough to build snowmen and shovel snow, if the sun was out, the glare off the snow would have me "seeing green." Does this reflect the fact (oops, sorry for the pun) that the blackbody radiation from the sun peaks in the area of yellow-green wavelengths? Or is something else going on?
Top

charlieo3 wrote:When I was young enough to build snowmen and shovel snow, if the sun was out, the glare off the snow would have me "seeing green." Does this reflect the fact (oops, sorry for the pun) that the blackbody radiation from the sun peaks in the area of yellow-green wavelengths? Or is something else going on?

Our eyes can never see a blackbody spectrum as green, even if that's where the peak wavelength is. I think what you saw was related to your eyes, or your perception, not anything physical. I've never seen glare from snow as green, or heard it reported that way. But everybody sees things a little differently. (To normal vision, sunlit snow is about as close to white as it's possible for anything to be.)
Chris

http://www.webexhibits.org/causesofcolor/5C.html wrote:
<<What causes the blue color that sometimes appears in snow and ice?

As with water, this color is caused by the absorption of both red and yellow light (leaving light at the blue end of the visible light spectrum). The absorption spectrum of ice is similar to that of water, except that hydrogen bonding causes all peaks to shift to lower energy - making the color greener. This effect is augmented by scattering within snow, which causes the light to travel an indirect path, providing more opportunity for absorption.

From the surface, snow and ice present a uniformly white face. This is because almost all of the visible light striking the snow or ice surface is reflected back, without any preference for a single color within the visible spectrum.

The situation is different for light that is not reflected, but penetrates or is transmitted into the snow. As this light travels into the snow or ice, the ice grains scatter a large amount of light. If the light is to travel over any distance it must survive many such scattering events. In other words, it must keep scattering and not be absorbed. We usually see the light coming back from the near surface layers (less than 1 cm) after it has been scattered or bounced off other snow grains only a few times, and it still appears white.>>

http://www.webexhibits.org/causesofcolor/5C.html wrote: <<What causes the blue color that sometimes appears in snow and ice?

I've never seen snow in the Sun look blue unless it was very thin and sitting on top of ice.

I think most people who notice blue snow are simply seeing it in the shade, where it is blue because it is lit by the blue sky.
Chris

The graph on the left is tooo complicated for me. But the image of the red X on the right, is really simple.
To find the Truth, you must go Beyond.
Top 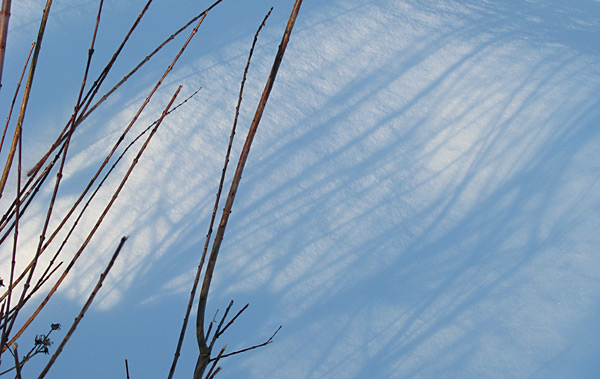 This is an even stranger-looking example of blue ice.

It is true to suggest a blue contribution is possible from a blue sky, but the bulk of the blue one sees in ice caves and glacial crevasses is transmitted. I've seen both, and the there is no confusion. When your surrounded by a diffuse blue source and the outdoor illumination is not directly incident on the surface, there is no confusion.

Ann - Your picture of a "stranger-looking" example is not strange at all. The grayish exterior is reflecting the ambient, cloudy light whereas the nooks and crannies are filtered blue light. The clarity of the blue in shadow regions is simply because the diffuse transmitted light is not swamped out by the brighter ambient light.

Scientifically speaking, peak transmission (maximum absorption length) in ice and water (not necessarily the same) occurs in the 400nm to 480nm range. There are several sources that clearly show the weighted transmission is in the blue region. You'll find the absorption length for the 400nm to 500nm region is 2.5x to 5x longer than that for the 500nm to 600nm spectral region. Average transmission between 500nm and 600nm is roughly 10% of the blue spectral region or less. Blue ice is not a blue-sky illusion as the blue color is dominated by transmission characteristics.

That's because we rarely see snow that is lit by the Sun that isn't also lit by the sky. Sunlight is visually pure white, but gets separated by atmospheric effects into yellow direct light and blue indirect light. Under the open sky, snow (which is approximately Lambertian in its scattering characteristics) recombines these, so we see a very pure white. In typical shade, the lighting is unbalanced in favor of the sky, so snow appears blue. But it's easy to see yellow snow as well (no jokes!). When you're under fairly deep tree cover, direct sunlight that filters through the branches shows a yellow cast, because the spots it produces on the snow are now preferentially lit by the direct light, and don't have much skylight to shift the yellow back towards white.

Of course, snow lit by the Sun when it is very low in the sky is commonly yellow, pink, or purple.

Of course, the situation with ice is quite different that that of snow. Those are separate discussions.
Chris