Click to play embedded YouTube video.
WFIRST: The Best of Both Worlds
Credit: NASA GSFC/Wiessinger
After years of preparatory studies, NASA is formally starting an astrophysics mission designed to help unlock the secrets of the universe -- the Wide Field Infrared Survey Telescope (WFIRST).

With a view 100 times bigger than that of NASA’s Hubble Space Telescope, WFIRST will aid researchers in their efforts to unravel the secrets of dark energy and dark matter, and explore the evolution of the cosmos. It also will discover new worlds outside our solar system and advance the search for worlds that could be suitable for life.

NASA's Agency Program Management Council, which evaluates the agency's programs and projects on content, risk management, and performance, made the decision to move forward with the mission on Wednesday. ...

WFIRST is the agency's next major astrophysics observatory, following the launch of the James Webb Space Telescope in 2018. The observatory will survey large regions of the sky in near-infrared light to answer fundamental questions about the structure and evolution of the universe, and expand our knowledge of planets beyond our solar system – known as exoplanets. ...


WFIRST: Uncovering Cosmic Mysteries
Hubble Hangout | 2016 Feb 18 | 2:00 pm EST
Know the quiet place within your heart and touch the rainbow of possibility; be
alive to the gentle breeze of communication, and please stop being such a jerk. — Garrison Keillor
Top


Study finds future telescope could unveil some mysteries of the universe

A NASA telescope that will give humans the largest, deepest, clearest picture of the universe since the Hubble Space Telescope could find as many as 1,400 new planets outside Earth’s solar system, new research suggests.

The new telescope paves the way for a more accurate, more focused search for extraterrestrial life, according to researchers.

The study, by a team of astronomers at The Ohio State University, provides the most detailed estimates to date of the potential reach of the Wide Field Infrared Survey Telescope mission (nicknamed WFIRST.) It was designed by NASA and astronomers throughout the country to find new planets and research dark energy, the mysterious force that pervades otherwise empty space and that could hold the keys to understanding how the universe expands. ...


Predictions of the WFIRST Microlensing Survey. I. Bound Planet Detection Rates ~ Matthew T. Penny et al
Know the quiet place within your heart and touch the rainbow of possibility; be
alive to the gentle breeze of communication, and please stop being such a jerk. — Garrison Keillor
Top

WFIRST was ranked as the highest scientific priority for a large space astrophysics mission in the Decadal Survey conducted by the National Research Council in 2010. The launch of WFIRST is planned for the mid-2020s. To be located one million miles beyond Earth, WFIRST's prime mission will last for five years. ...

STScI is the science operations center for both the Hubble and upcoming James Webb Space Telescope (JWST). Its expertise with these great observatories puts the Institute in a unique position to support cutting-edge astronomical research well into the future. STScI was established in 1981 on the Johns Hopkins University campus, and is operated by the Association of Universities for Research in Astronomy (AURA).

AURA/STScI will join a team led by NASA's Goddard Space Flight Center (GSFC) in Greenbelt, Maryland, which manages the WFIRST mission for NASA. The team also includes the Jet Propulsion Laboratory (JPL) in Pasadena, California; the Infrared Processing and Analysis Center (IPAC), also in Pasadena; a science team comprised of members from U.S. research institutions across the country, including STScI astronomers; and various industrial and international partners.

The WFIRST observatory will follow on the legacy of the Hubble Space Telescope. WFIRST has the same-sized mirror, but will have a wide-field view of the universe in near-infrared light. Sharp exposures of millions of far-flung galaxies will be done in a fraction of the time that it would take with Hubble. WFIRST's deep-space view will cover 100 times the area of sky as Hubble. ...

Click to play embedded YouTube video.
Take a Spin With NASA’s WFIRST Spacecraft
Credit: NASA/GSFC/Scott Wiessinger (USRA)
On schedule to launch in the mid-2020s, NASA’s Wide Field Infrared Survey Telescope (WFIRST) mission will help uncover some of the biggest mysteries in the cosmos. The state-of-the-art telescope on the WFIRST spacecraft will play a significant role in this, providing the largest picture of the universe ever seen with the same depth and precision as the Hubble Space Telescope.

The telescope for WFIRST has successfully passed its preliminary design review, a major milestone for the mission. This means the telescope has met the performance, schedule, and budget requirements to advance to the next stage of development, where the team will finalize its design. ...

WFIRST is leveraging existing hardware that was transferred to NASA, and the development is much further along at this point than it would be if the telescope had originated with WFIRST. While many of the inherited components are being modified or reconfigured to function as part of the final design, the telescope is already at a very advanced stage of design.

WFIRST is a high-precision survey mission that will advance our understanding of fundamental physics. WFIRST is similar to other space telescopes, like Spitzer and the James Webb Space Telescope, in that it will detect infrared light, which is invisible to human eyes. Earth’s atmosphere absorbs infrared light, which presents challenges for observatories on the ground. WFIRST has the advantage of flying in space, above the atmosphere. ...

Click to play embedded YouTube video.
Unraveling the Mysteries of Dark Energy with WFIRST
Music: "Searching Everywhere" from Universal Production Music
Video Credit: NASA/GSFC/SVS
Scientists have discovered that a mysterious pressure dubbed "dark energy" makes up about 68% of the total energy content of the cosmos, but so far we don't know much more about it. Exploring the nature of dark energy is one of the primary reasons NASA is building the Wide Field Infrared Survey Telescope (WFIRST), a space telescope whose measurements will help illuminate the dark energy puzzle. With a better understanding of dark energy, we will have a better sense of the past and future evolution of the universe. ...

What exactly is dark energy? More is unknown than known, but theorists are chasing down a couple of possible explanations. Cosmic acceleration could be caused by a new energy component, which would require some adjustments to Einstein's theory of gravity - perhaps the cosmological constant, which Einstein called his biggest blunder, is real after all.

Alternatively, Einstein's theory of gravity may break down on cosmological scales. If this is the case, the theory will need to be replaced with a new one that incorporates the cosmic acceleration we have observed. Theorists still don't know what the correct explanation is, but WFIRST will help us find out.

Previous missions have gathered some clues, but so far they haven't yielded results that strongly favor one explanation over another. With the same resolution as Hubble's cameras but a field of view that is 100 times larger, WFIRST will generate never-before-seen big pictures of the universe. The new mission will advance the exploration of the dark energy mystery in ways that other telescopes can't by mapping how matter is structured and distributed throughout the cosmos, and also by measuring large numbers of distant supernovae. The results will indicate how dark energy acts across the universe, and whether and how it has changed over cosmic history.

The mission will use three survey methods to search for an explanation of dark energy. The High Latitude Spectroscopic Survey will measure accurate distances and positions of millions of galaxies using a "standard ruler" technique. ... The High Latitude Imaging Survey will measure the shapes and distances of multitudes of galaxies and galaxy clusters. ... WFIRST will also conduct a survey of one type of exploding star, building on the observations that led to the discovery of accelerated expansion. Type Ia supernovae ...

Click to play embedded YouTube video.
WFIRST's Coronagraph Instrument ~ Credit: NASA/GSFC, USRA
When a new NASA space telescope opens its eyes in the mid-2020s, it will peer at the universe through some of the most sophisticated sunglasses ever designed.

This multi-layered technology, the coronagraph instrument, might more rightly be called “starglasses”: a system of masks, prisms, detectors and even self-flexing mirrors built to block out the glare from distant stars — and reveal the planets in orbit around them.

Normally, that glare is overwhelming, blotting out any chance of seeing planets orbiting other stars, called exoplanets, said Jason Rhodes ...

A star's photons - particles of light - vastly overpower any light coming from an orbiting planet when they hit the telescope.

"What we're trying to do is cancel out a billion photons from the star for every one we capture from the planet," Rhodes said. ... 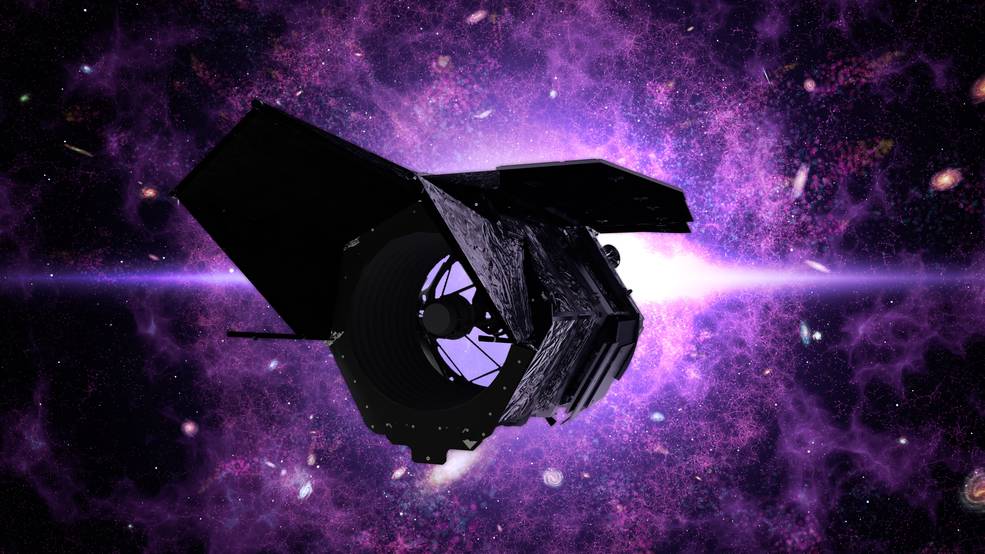 The newly named Nancy Grace Roman Space Telescope – or Roman Space Telescope, for short – is set to launch in the mid-2020s. It will investigate long-standing astronomical mysteries, such as the force behind the universe’s expansion, and search for distant planets beyond our solar system.

Considered the “mother” of NASA’s Hubble Space Telescope, which launched 30 years ago, Roman tirelessly advocated for new tools that would allow scientists to study the broader universe from space. She left behind a tremendous legacy in the scientific community when she died in 2018. ...

Know the quiet place within your heart and touch the rainbow of possibility; be
alive to the gentle breeze of communication, and please stop being such a jerk. — Garrison Keillor
Top
7 posts • Page 1 of 1