This false-color image from a sub-millimeter interferometric telescope shows the circumstellar disk of gas and dust that surrounds star CI Tau. (Image courtesy of Stephane Guilloteau/University of Bordeaux)

In contradiction to the long-standing idea that larger planets take longer to form, U.S. astronomers today announced the discovery of a giant planet in close orbit around a star so young that it still retains a disk of circumstellar gas and dust.

“For decades, conventional wisdom held that large Jupiter-mass planets take a minimum of 10 million years to form,” said Christopher Johns-Krull, ... “That’s been called into question over the past decade, and many new ideas have been offered, but the bottom line is that we need to identify a number of newly formed planets around young stars if we hope to fully understand planet formation.”

CI Tau b is at least eight times larger than Jupiter and orbits a 2 million-year-old star about 450 light years from Earth in the constellation Taurus. ...

CI Tau b orbits the star CI Tau once every nine days. The planet was found with the radial velocity method, a planet-hunting technique that relies upon slight variations in the velocity of a star to determine the gravitational pull exerted by nearby planets that are too faint to observe directly with a telescope. The discovery resulted from a survey begun in 2004 of 140 candidate stars in the star-forming region Taurus-Auriga. ...


A Candidate Young Massive Planet in Orbit around the Classical T Tauri Star CI Tau - Christopher M. Johns-Krull et al
Know the quiet place within your heart and touch the rainbow of possibility; be
alive to the gentle breeze of communication, and please stop being such a jerk. — Garrison Keillor
Top 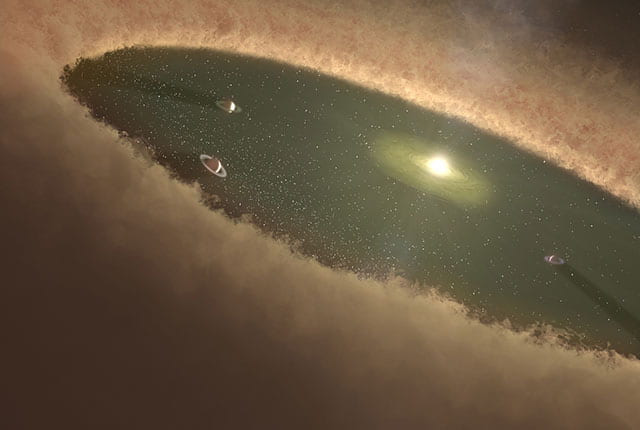 An artist’s concept of several gas giant planets orbiting near a young star that has a remnant protoplanetary disk. Because the remnant disk around CI Tau is at a slight angle, similar to what is shown in this image, astronomers were able directly measure light from both the star and its close-orbiting planet CI Tau b. (Image Credit: NASA/JPL-Caltech/T. Pyle)

CI Tau b is a paradoxical planet, but new research about its mass, brightness and the carbon monoxide in its atmosphere is starting to answer questions about how a planet so large could have formed around a star that’s only 2 million years old.

At today’s meeting of the American Astronomical Society in St. Louis, astronomers Christopher Johns-Krull of Rice University and Lisa Prato of Lowell Observatory presented findings from a four-year near-infrared spectroscopic analysis of light from CI Tau b, a close-orbiting giant exoplanet, or “hot Jupiter,” in a nine-day orbit around its parent star about 450 light years from Earth in the constellation Taurus.

“The exciting thing is that we are able to detect light directly from the planet, and it’s the first time that’s been done for a close-in planet around a star this young,” said Johns-Krull ... “The most valuable way to learn how planets form is to study planets, like CI Tau b, that are either still forming or have just formed.”

For decades, most astronomers believed giant planets like Jupiter and Saturn formed far from their stars over periods of 10 million years or more. But the discovery of dozens of “hot Jupiters” led to new theoretical models that describe how such planets might form. ...


CO Detected in CI Tau b: Hot Start Implied by Planet Mass and MK ~ Laura Flagg et al
Know the quiet place within your heart and touch the rainbow of possibility; be
alive to the gentle breeze of communication, and please stop being such a jerk. — Garrison Keillor
Top
2 posts • Page 1 of 1