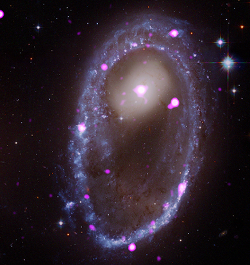 
Galaxies move through space at enormous speeds. The Milky Way and the Andromeda Galaxy, for example, are approaching each other at more than 500,000 kilometers per hour. Some regions of the Universe are crowded with galaxies, so it's not too rare an occurrence that one galaxy collides with a neighboring galaxy. Beautiful "ring galaxies" like the famous Cartwheel galaxy are formed by collisions in which a smaller galaxy slams into the larger galaxy normal to its disk. When such a collision occurs, large waves can be created in the interstellar material of the larger galaxy, like a ripple produced when a stone is thrown into a still pond (but, of course, on a galactic scale). The image above is a composite of X-ray image (obtained by the Chandra X-ray Observatory) in purple, and an optical image (from the Hubble Space Telescope) of a beautiful example of a ring galaxy, AM 0644-74. The ring in AM 0644-74 contains bright gas clouds which glow in optical light, dotted with exceptionally bright point sources of X-ray emission, and shows X-ray emission from nuclear X-ray source inside the ring. The point sources around the ring are either accreting black holes or neutron stars. Ring galaxies provide astronomers with a laboratory for understanding how galaxy-galaxy collisions help drive the formation of massive stars and the birth of neutron stars and black holes.