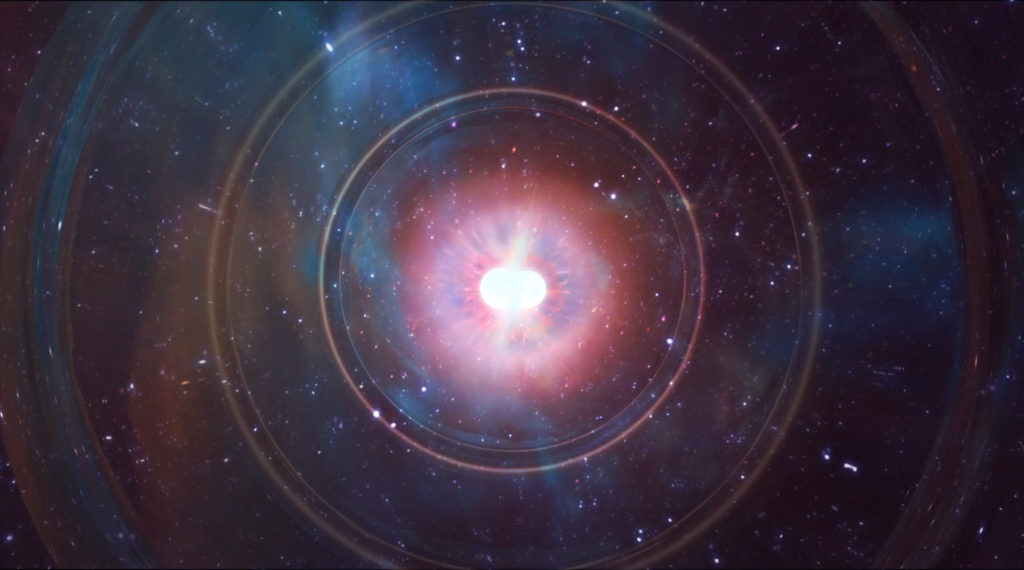 Artist's impression of the explosion and burst of gravitational waves emitted when a pair of superdense neutron stars collide. New observations with radio telescopes show that such events can be used to measure the expansion rate of the Universe. Credit: NRAO/AUI/NSF

Astronomers using National Science Foundation (NSF) radio telescopes have demonstrated how a combination of gravitational-wave and radio observations, along with theoretical modeling, can turn the mergers of pairs of neutron stars into a “cosmic ruler” capable of measuring the expansion of the Universe and resolving an outstanding question over its rate.

The astronomers used the NSF’s Very Long Baseline Array (VLBA), the Karl G. Jansky Very Large Array (VLA) and the Robert C. Byrd Green Bank Telescope (GBT) to study the aftermath of the collision of two neutron stars that produced gravitational waves detected in 2017. This event offered a new way to measure the expansion rate of the Universe, known by scientists as the Hubble Constant. The expansion rate of the Universe can be used to determine its size and age, as well as serve as an essential tool for interpreting observations of objects elsewhere in the Universe.

Two leading methods of determining the Hubble Constant use the characteristics of the Cosmic Microwave Background, the leftover radiation from the Big Bang, or a specific type of supernova explosions, called Type Ia, in the distant Universe. However, these two methods give different results.

“The neutron star merger gives us a new way of measuring the Hubble Constant, and hopefully of resolving the problem,” said Kunal Mooley, of the National Radio Astronomy Observatory (NRAO) and Caltech. ...


A Hubble Constant Measurement from Superluminal Motion of the Jet in GW170817 ~ Kenta Hotokezaka et al
Know the quiet place within your heart and touch the rainbow of possibility; be
alive to the gentle breeze of communication, and please stop being such a jerk. — Garrison Keillor
Top

<<The skinfold estimation methods are based on a skinfold test, also known as a pinch test, whereby a pinch of skin is precisely measured by calipers, also known as a Plicometer, at several standardized points on the body to determine the subcutaneous fat layer thickness. These measurements are converted to an estimated body fat percentage by an equation. Some formulas require as few as three measurements, others as many as seven. The accuracy of these estimates is more dependent on a person's unique body fat distribution than on the number of sites measured. As well, it is of utmost importance to test in a precise location with a fixed pressure. Skinfold-based body fat estimation is sensitive to the type of caliper used, and technique. This method also only measures one type of fat: subcutaneous adipose tissue (fat under the skin). Two individuals might have nearly identical measurements at all of the skin fold sites, yet differ greatly in their body fat levels due to differences in other body fat deposits such as visceral adipose tissue: fat in the abdominal cavity. Some models partially address this problem by including age as a variable in the statistics and the resulting formula. Older individuals are found to have a lower body density for the same skinfold measurements, which is assumed to signify a higher body fat percentage.>>