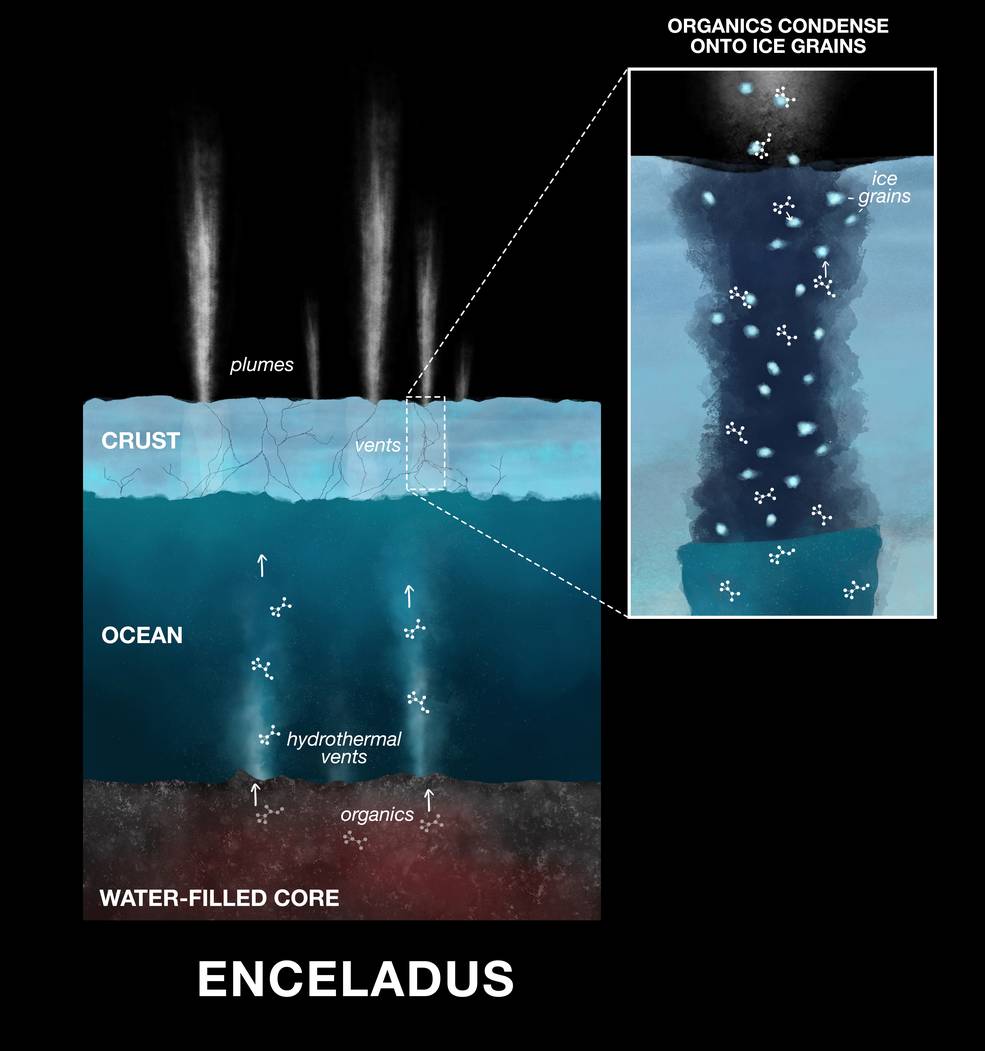 This illustration shows the process of organic compounds making their way onto ice grains emitted in plumes from Saturn's moon Enceladus, where they were detected by NASA's Cassini spacecraft. Credits: NASA/JPL-Caltech

New kinds of organic compounds, the ingredients of amino acids, have been detected in the plumes bursting from Saturn's moon Enceladus. The findings are the result of the ongoing deep dive into data from NASA's Cassini mission.

Powerful hydrothermal vents eject material from Enceladus' core, which mixes with water from the moon's massive subsurface ocean before it is released into space as water vapor and ice grains. The newly discovered molecules, condensed onto the ice grains, were determined to be nitrogen- and oxygen-bearing compounds.

Although the Cassini mission ended in September 2017, the data it provided will be mined for decades. Khawaja's team used data from the spacecraft's Cosmic Dust Analyzer, or CDA, which detected ice grains emitted from Enceladus into Saturn's E ring. The scientists used the CDA's mass spectrometer measurements to determine the composition of organic material in the grains.

The identified organics first dissolved in the ocean of Enceladus, then evaporated from the water surface before condensing and freezing onto ice grains inside the fractures in the moon's crust, scientists found. Blown into space with the rising plume emitted through those fractures, the ice grains were then analyzed by Cassini's CDA. ...


Low-Mass Nitrogen-, Oxygen-Bearing, and Aromatic Compounds in Enceladean Ice Grains ~ N. Khawaja et al
Know the quiet place within your heart and touch the rainbow of possibility; be
alive to the gentle breeze of communication, and please stop being such a jerk. — Garrison Keillor
Top

Is it possible that Enceladus may have; at one time, been the goldilocks zone?
Orin

https://en.wikipedia.org/wiki/Enchilada wrote:
<<Enchiladas originated in Mexico, where the practice of rolling tortillas around other food dates back at least to Mayan times. The people living in the lake region of the Valley of Mexico traditionally ate corn tortillas folded or rolled around small fish. Mexican cooking authority Diana Kennedy cites an early reference from an American traveler from 1883 who remarked, "Enchiladas, a greasy tortilla sandwich containing chiles and a number of other uninviting looking compounds and other nasty messes, are sold everywhere, filling the air with a pungent, nauseous smell.">>

Curiosity! Besides if it were; I think that would increase the odds that there is life in its ocean!

Saturn may have orbited a (somewhat cooler) early Sun at ~2 AU according to the grand tack hypothesis:

https://en.wikipedia.org/wiki/Grand_tack_hypothesis wrote:
<<In the grand tack hypothesis Jupiter underwent a two-phase migration after its formation, migrating inward to 1.5 AU before reversing course and migrating outward. Jupiter's formation took place near the ice line, at roughly 3.5 AU. After clearing a gap in the gas disk Jupiter underwent type II migration, moving slowly toward the Sun with the gas disk. If uninterrupted, this migration would have left Jupiter in a close orbit around the Sun like recently discovered hot Jupiters in other planetary systems. Saturn also migrated toward the Sun, but being smaller it migrated faster, undergoing either type I migration or runaway migration. Saturn converged on Jupiter and was captured in a 2:3 mean-motion resonance with Jupiter during this migration. An overlapping gap in the gas disk then formed around Jupiter and Saturn, altering the balance of forces on these planets which began migrating together. Saturn partially cleared its part of the gap reducing the torque exerted on Jupiter by the outer disk. The net torque on the planets then became positive, with the torques generated by the inner Lindblad resonances exceeding those from the outer disk, and the planets began to migrate outward. The outward migration was able to continue because interactions between the planets allowed gas to stream through the gap. The gas exchanged angular momentum with the planets during its passage, adding to the positive balance of torques; and transferred mass from the outer disk to the inner disk, allowing the planets to migrate outward relative to the disk. The transfer of gas to the inner disk also slowed the reduction of the inner disk's mass relative to the outer disk as it accreted onto the Sun, which otherwise would weaken the inner torque, ending the planets' outward migration. In the grand tack hypothesis this process is assumed to have reversed the inward migration of the planets when Jupiter is at 1.5 AU. The outward migration of Jupiter and Saturn continued until they reached a zero-torque configuration within a flared disk, or the gas disk dissipated, and is supposed to end with Jupiter near its current orbit.

Jupiter's grand tack resolves the Mars problem by limiting the material available to form Mars. The Mars problem is a conflict between some simulations of the formation of the terrestrial planets which end with a 0.5–1.0 Earth-mass planet in its region, much larger than the actual mass of Mars: 0.107 Earth-mass, when begun with planetesimals distributed throughout the inner Solar System. Jupiter's inward migration alters this distribution of material, driving planetesimals inward to form a narrow dense band with a mix of materials inside 1.0 AU, and leaves the Mars region largely empty. Planetary embryos quickly form in the narrow band. Most of these embryos collide and merge to form the larger terrestrial planets (Venus and Earth) over a period of 60 to 130 million years. Others are scattered outside the band where they are deprived of additional material, slowing their growth, and form the lower-mass terrestrial planets Mars and Mercury.>>

Enhanced-color maps of the northern & southern hemispheres of Enceladus


<<In 1912, Maillard published a paper describing the reaction between amino acids and sugars at elevated temperatures. In 1953, chemist John E. Hodge, with the U.S. Department of Agriculture, established a mechanism for the Maillard reaction.

The Maillard reaction is responsible for many colors and flavors in foods, such as the browning of various meats when seared or grilled, the browning and umami taste in fried onions, and coffee roasting. It is similarly responsible for the darkened crust of baked goods, the golden-brown color of French fries and other crisps, of malted barley as found in malt whiskey and beer, and the color and taste of dried and condensed milk, dulce de leche, the Sri Lankan confection milk toffee, black garlic, chocolate, and roasted peanuts. In making silage, excess heat causes the Maillard reaction to occur, which reduces the amount of energy and protein available to the animals that feed on it

The browning reactions that occur when meat is roasted or seared are complex, and occur mostly by Maillard browning with contributions from other chemical reactions, including the breakdown of the tetrapyrrole rings of the muscle protein myoglobin.

Caramelization is an entirely different process from Maillard browning, though the results of the two processes are sometimes similar to the naked eye (and taste buds). Caramelization may sometimes cause browning in the same foods in which the Maillard reaction occurs, but the two processes are distinct. They are both promoted by heating, but the Maillard reaction involves amino acids, as discussed above, whereas caramelization is simply the pyrolysis of certain sugars.>>