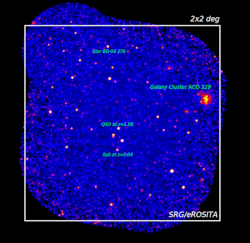 
Mapping the X-ray emission over the entire sky helps alleviate scientific FOMS: fear of missing something. The X-ray sky is extremely dynamic and ever-changing, and all sorts of interesting things happen all the time: stars explode, black holes and neutron stars merge, supermassive black holes shoot enormous jets of high energy particles into intergalactic space, and other peculiarities beyond the realm of current understanding and imagination. A new telescope, eROSITA, aboard the Spektr-R&ouml;ntgen-Gamma (Spektr-RG, or sometimes simply SRG) is beginning its mission to actually map the entire X-ray sky. eROSITA consists of seven individual X-ray telescopes covering about 1 degree of the sky at at time. From its halo orbit at the earth-Sun L2 point (about 1 million miles from earth), eROSITA wiill scan the entire sky over a 4 year period (followed by targeted observations of individual sources of interest after that). eROSITA's All-Sky Survey advances the ground-breaking All-Sky Survey carried out by the ROSAT X-ray space observatory nearly 30 years ago. eROSITA's All-Sky Survey will be a major step forward in imaging resolution over an energy band more four times larger and a timespan about eight times longer than the ROSAT All-Sky Survey. The images and spectra obtained by eROSITA will be an enormous treasure-trove documenting known and currently unsuspected X-ray sources in the Universe. The image above is a verification image obtained by a single eROSITA telescope, of the so-called "Ultra-Deep Survey" area. The UDS is part of XMM's "XXL survey" to study galaxy clusters to reveal how Dark Energy shapes the structure of the Universe. eROSITA is currently undergoing performance testing prior to the start of its all-sky survey observing phase.


MPE: A Glimpse of Extragalactic Sky with the SRG Observatory: eROSITA Opens Its First Eye
viewtopic.php?t=39544