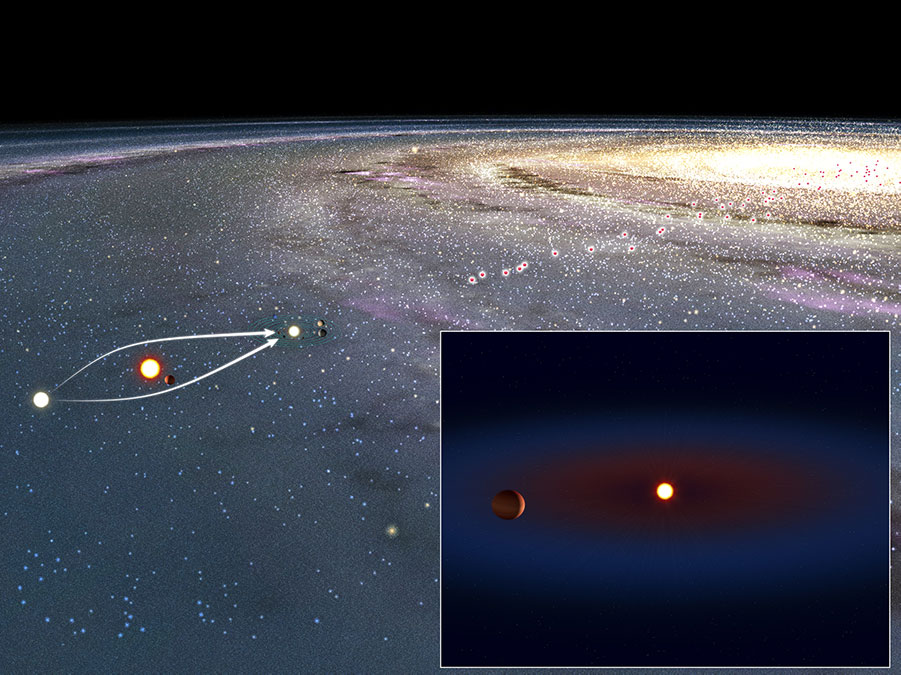 Diagram illustrating the microlensing event studied in this research. Red dots indicate previous exoplanet systems discovered by microlensing. Inset: Artist's conception of the exoplanet and its host star. (Credit: The University of Tokyo)

Researchers using telescopes around the world confirmed and characterized an exoplanet orbiting a nearby star through a rare phenomenon known as gravitational microlensing. The exoplanet has a mass similar to Neptune, but it orbits a star lighter (cooler) than the Sun at an orbital radius similar to Earth’s orbital radius. Around cool stars, this orbital region is thought to be the birth place of gas-giant planets. The results of this research suggest that Neptune-sized planets could be common around this orbital region. Because the exoplanet discovered this time is closer than other exoplanets discovered by the same method, it is a good target for follow-up observations by world-class telescopes like the Subaru Telescope.

On November 1, 2017 amateur astronomer Tadashi Kojima in Gunma Prefecture, Japan reported an enigmatic new object in the constellation Taurus. Astronomers around the world began follow-up observations and determined that this was an example of a rare event known as gravitational microlensing. Einstein’s Theory of General Relativity tells us that gravity warps space. If a foreground object with strong gravity passes directly in front of a background object in outer space this warped space can act as a lens and focus the light from the background object, making it appear to brighten temporarily. In the case of the object spotted by Kojima, a star 1600 light-years away passed in front of a star 2600 light-years away. Furthermore, by studying the change in the lensed brightness, astronomers determined that the foreground star has a planet orbiting it.

This is not the first time an exoplanet has been discovered by the microlensing technique. But microlensing events are rare and short lived, so the ones discovered so far lie towards the Galactic Center, where stars are the most abundant. In contrast, this exoplanet system was found in almost exactly the opposite direction as observed from the Earth. ...


Kojima-1Lb Is a Mildly Cold Neptune around the Brightest Microlensing Host Star ~ A. Fukui et al
Know the quiet place within your heart and touch the rainbow of possibility; be
alive to the gentle breeze of communication, and please stop being such a jerk. — Garrison Keillor
Top
1 post • Page 1 of 1