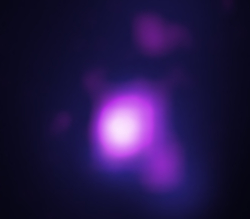 
The masses of black holes that have been measured with reasonable accuracy seem to fall into a limited number of ranges. There are the "stellar mass black holes", which have masses of a few to tens of solar masses. Stellar mass black holes are often identified by the X-ray emission they produce when they swallow material that they pull off a normal companion star. Then there are the supermassive black holes, normally found lurking at the centers of galaxies, which have masses of millions (or even billions) of Suns. These supermassive beasts are identified by the strong X-ray, optical and radio emission that they produce as they actively swallow material - gas, dust, stars, planets - in their immediate vicinity. Since (as far as we know) all black holes are formed from the explosive collapse of massive stars (stars at least ten times more massive than the Sun), perhaps supermassive black holes are built up from the mergers of stellar mass black holes. But if so, how? We've now been able to directly witness how large stellar mass black holes are built from the mergers of less massive black holes, by watching how these titanic cosmic collisions shake the Universe. We know that galaxies merge, and if so, it's possible that supermassive black holes in the merging galaxies might merge themselves, forming an even-more-supermassive black hole. This process may be playing out in the system SDSS J084905.51+111447.2, a collision of three galaxies about a billion light years from earth. The inset X-ray image from the Chandra X-ray Observatory shows three sources of X-ray emission (one bright one near the center, and two fainter ones, above and to the right). The X-ray data, along with data from NASA's Wide-field Infrared Survey Explorer and ground-based optical data from the Sloan Digital Sky Survey and the Large Binocular Telescope, show that these sources are accreting supermassive black holes residing in the merging galaxies. Identifying such triple black hole systems is important, because it's believed the third black hole can play a key role in slowing down the other two to allow them to spiral together and finally merge. This may be an important step in finally solving the "final parsec problem".