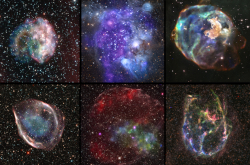 
Observations from telescopes in space provide extraordinary information on objects that are of particular interest to professional scientists. Scientists competitively propose for such observations, analyze the data and publish the results. The digitized data themselves become part of a growing legacy of space-based images. These pictures are freely available to everyone, scientists and the general public alike, allowing all to study the beauty of the cosmos in ways that, until a few decades ago, we could scarcely imagine. The images displayed above selected, beautiful images released by the Hubble Space Telescope[/url] and Chandra X-ray Observatory archives as part of Archives Month this past October. These images are composites of visible-band images from the Hubble Space Telescope and invisible-band X-ray images from the Chandra X-ray Observatory. The comparison of the high-definition optical Hubble images with high-definition Chandra X-ray images reveals how high-energy explosions and collisions originate with individual objects, and provides a much fuller picture of our dynamic Universe. The images above show individual X-ray emitting clouds produced either by powerful supernova explosions or from the combined power of winds and outflows from stars. These X-ray emitting clouds are all located within the Large Magellanic Cloud, a companion galaxy to the Milky Way more than 150,000 lightyears distant. Clockwise from uppper left, the objects known prosaically as: N103B, a hot gas cloud produced by the explosion of a white dwarf star after it was pushed beyond its Chandrasekhar mass limit; LHA 120-N 44, a giant, hot, wind-blown bubble around a star-forming region; LMC N63A, the remnant of the explosion of a star many times more massive than the Sun, a so-called core collapse supernova; N132D, a horseshoe-shaped supernova remnant produced by the core-collapse of a massive star; and DEM L238 and DEM L71, remnants of white dwarf supernovae. Many more beautiful images can be found in the archives - go take a look.