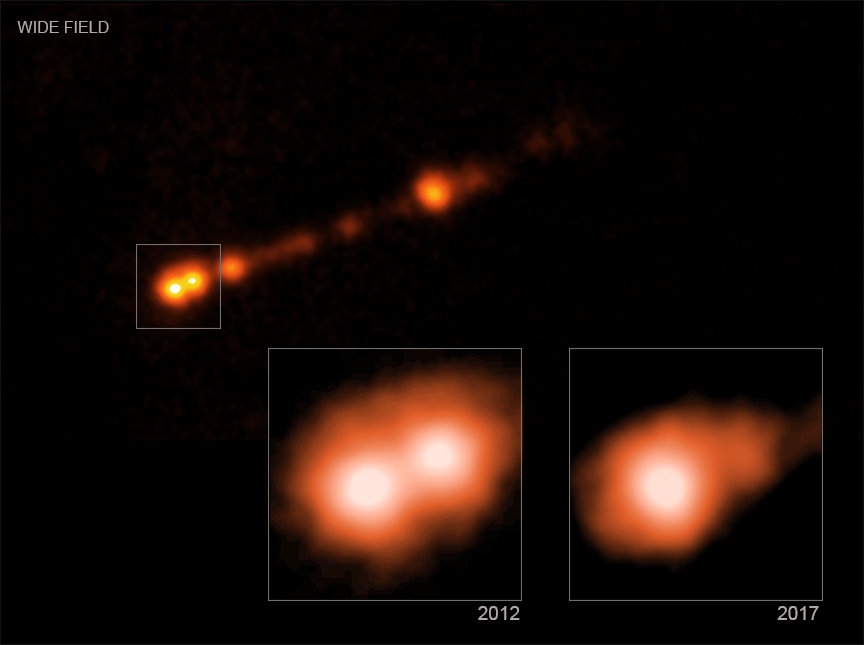 These images show evidence from NASA's Chandra X-ray Observatory that the black hole in the galaxy Messier 87 (M87) is blasting particles out at over 99% the speed of light, as described in our latest press release. While astronomers have observed features in the M87 jet blasting away from its black hole this quickly at radio and optical wavelengths for many years, this provides the strongest evidence yet that actual particles are traveling this fast. Astronomers required the sharp X-ray vision from Chandra in order to make these precise measurements.

The main panel of the graphic shows the entire length of M87's jet seen by Chandra, stretching for about 18,000 light years. "Knots" of X-ray emission seen here are created when material falls onto the M87 sporadically, creating bursts of X-ray light that travel along the jet and away from the black hole. The insets show Chandra observations taken in 2012 and 2017 of a small region near the base of the jet. The source in the lower left is X-ray emission from material around the black hole, and the other source is a knot in the jet about 900 light years from the black hole. This knot moves away from the black hole between 2012 and 2017 and also fades by 70%.

The researchers carefully studied this knot, and another one about 2,500 light years along the jet. By comparing how far these knots moved over the five-year interval, the team of astronomers was able to determine the closer knot has an apparent speed of 6.3 times the speed of light for the X-ray knot, while the other looks like it is moving at 2.4 times the speed of light. ...


Detection of Superluminal Motion in the X-Ray Jet of M87 ~ Bradford Snios et al
Know the quiet place within your heart and touch the rainbow of possibility; be
alive to the gentle breeze of communication, and please stop being such a jerk. — Garrison Keillor
Top

Saturno, you should ask people like Chris Petersen about this. I think it has to do with the angle of which we are watching the knots move. At certain angles, objects may appear to move faster than light.

This is what Wikipedia says about it:

This phenomenon is caused by the jets traveling very near the speed of light towards the observer. The angle is not necessarily very small with the line-of-sight as is commonly asserted.[2] Because the high-velocity jets are emitting light at every point of their path, the light they emit does not approach the observer much more quickly than the jet itself. This causes the light emitted over hundreds of years of the jet's travel to not have hundreds of light-years of distance between its front end (the earliest light emitted) and its back end (the latest light emitted); the complete "light-train" thus arrives at the observer over a much smaller time period (ten or twenty years), giving the illusion of faster-than-light travel.

This explanation depends on the jet making a sufficiently narrow angle with the observer's line-of-sight to explain the degree of superluminal motion seen in a particular case.[3]

I'm not sure I get all of this, but you should probably read all of the Wikipedia article yourself.

I'm not sure I get all of this, but you should probably read all of the Wikipedia article yourself.

It helps to first believe in Unicorns.

Ann, thanks for your explanation
Top
5 posts • Page 1 of 1