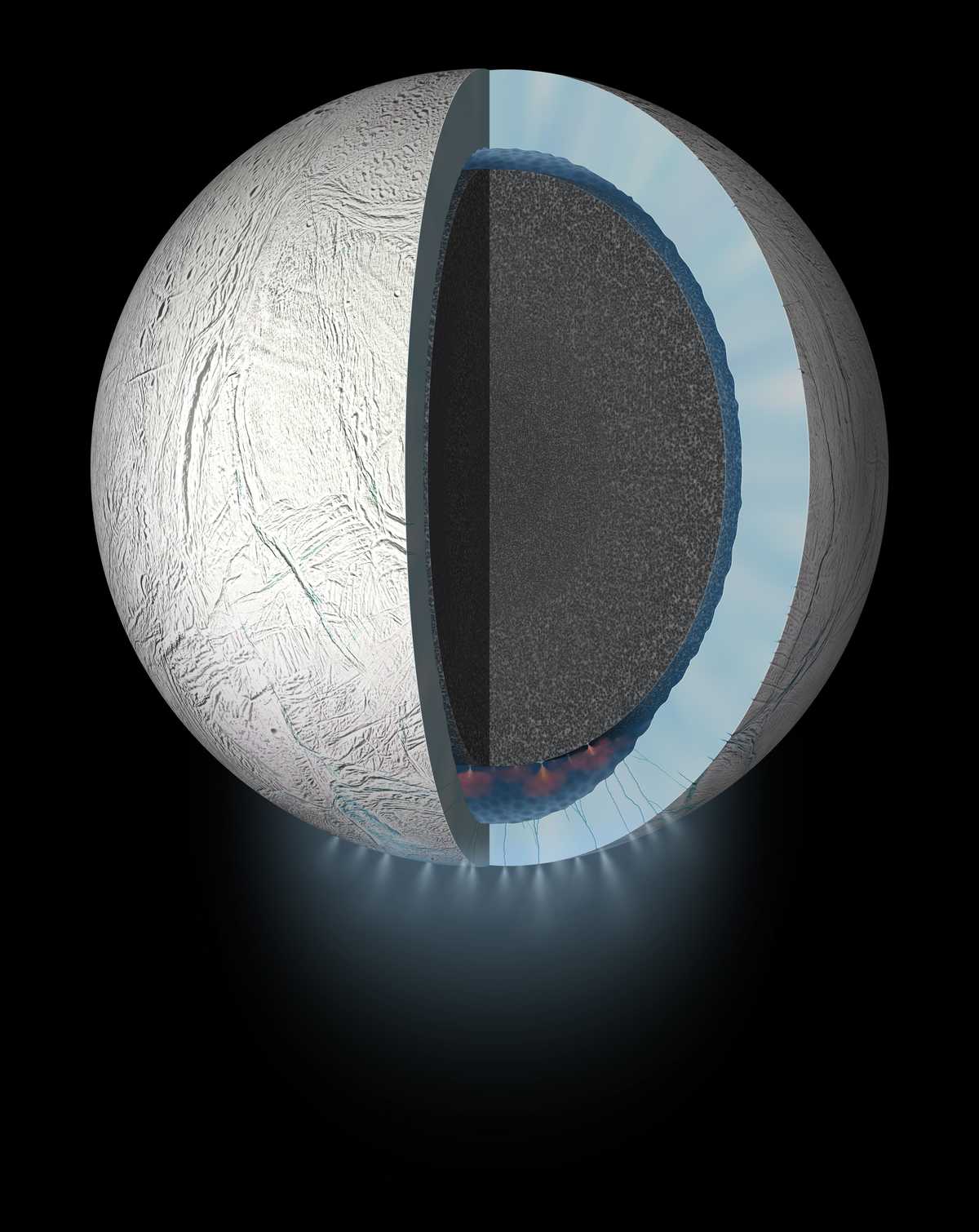 Using new geochemical models, SwRI scientists found that CO2 in Enceladus’ ocean may be controlled by chemical reactions at the seafloor. Integrating this finding with previous discoveries of H2 and silica suggests geochemically diverse environments in the rocky core. This diversity has the potential to create energy sources that could support life. (Credit: NASA/JPL-Caltech)

A Southwest Research Institute team developed a new geochemical model that reveals that carbon dioxide (CO2) from within Enceladus, an ocean-harboring moon of Saturn, may be controlled by chemical reactions at its seafloor. Studying the plume of gases and frozen sea spray released through cracks in the moon’s icy surface suggests an interior more complex than previously thought. ...

Analysis of mass spectrometry data from NASA’s Cassini spacecraft indicates that the abundance of CO2 is best explained by geochemical reactions between the moon’s rocky core and liquid water from its subsurface ocean. Integrating this information with previous discoveries of silica and molecular hydrogen (H2) points to a more complex, geochemically diverse core. ...

Another phenomenon that contributes to this complexity is the likely presence of hydrothermal vents inside Enceladus. At Earth’s ocean floor, hydrothermal vents emit hot, energy-rich, mineral-laden fluids that allow unique ecosystems teeming with unusual creatures to thrive. ...

The scientific community continues reaping the benefits of Cassini’s close flyby of Enceladus on Oct. 28, 2015, prior to the end of the mission. INMS detected H2 as the spacecraft flew through the plume, and a different instrument had earlier detected tiny particles of silica, two chemicals that are considered to be markers for hydrothermal processes. ...

It is proposed that hydrothermal oxidation of reduced iron deep in the core creates H2, while hydrothermal activity intersecting quartz-bearing carbonated rocks produces silica-rich fluids. Such rocks also have potential to influence the CO2 chemistry of the ocean via low-temperature reactions involving silicates and carbonates at the seafloor. ...


The Carbonate Geochemistry of Enceladus’ Ocean ~ Christopher R. Glein & J. Hunter Waite
Know the quiet place within your heart and touch the rainbow of possibility; be
alive to the gentle breeze of communication, and please stop being such a jerk. — Garrison Keillor
Top
1 post • Page 1 of 1