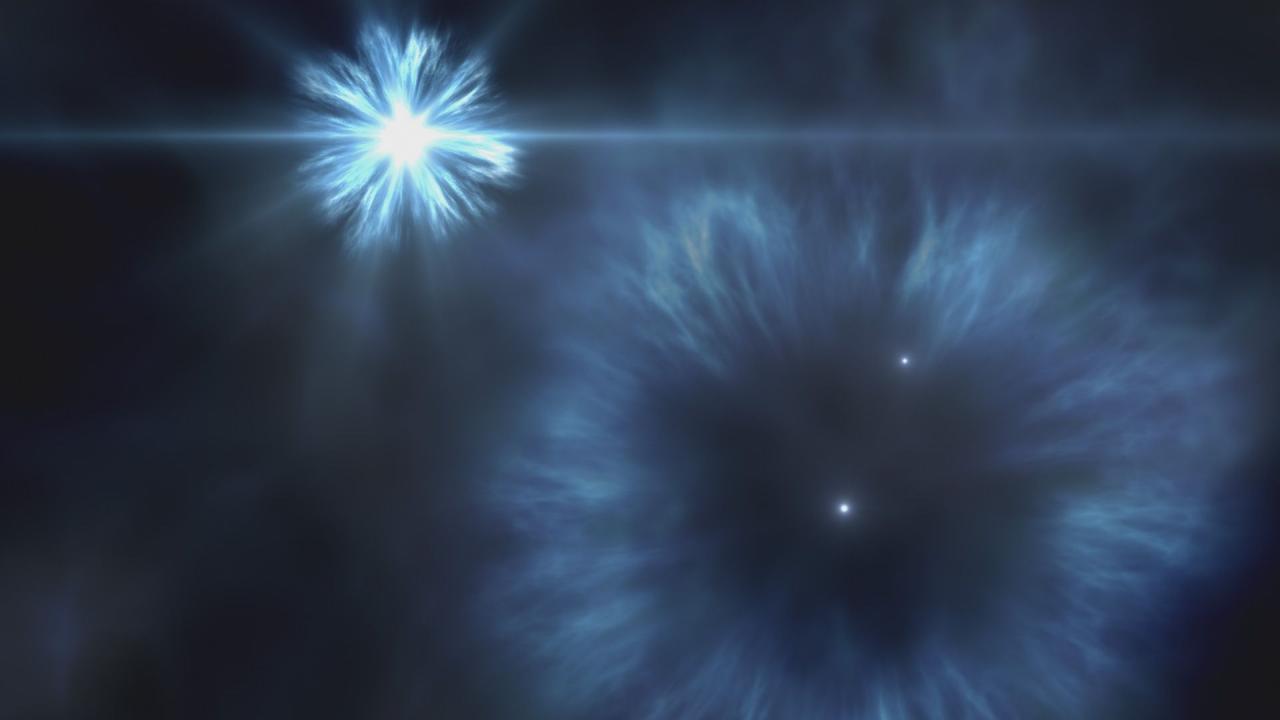 Artistic image of the supernova explosions of the first massive stars that formed in the Milky Way. The star J0815+4729 was formed from the material ejected by these first supernovae. Credit: Gabriel Pérez, SMM (IAC)

Scientists from the Instituto de Astrofísica de Canarias (IAC), in collaboration with the University of Cambridge and the University of California San Diego, detect large amounts of oxygen in the atmosphere of the "primitive star" called J0815+4729. This finding ... provides an important clue on how oxygen and other chemical elements were produced in the first generations of stars in the Universe.

Oxygen is the third most abundant element in the Universe after hydrogen and helium. It is essential for all forms of life on Earth, and a building block of carbohydrates. It is also the main component of the Earth's crust. However, oxygen didn’t exist in the early Universe. This element is mainly created inside massive stars with masses greater than roughly 10 solar masses.

The star J0815+4729 is an old star of the halo of the galaxy discovered by the IAC team in 2018 using the Gran Telescopio Canarias (GTC), in the Roque de los Muchachos Observatory (Garafía, La Palma).

The research team recently observed this star with the Keck telescope in Hawaii to determine the detailed chemical composition of its atmosphere. "The primitive composition of the star indicates that it was formed during the first hundreds of millions of years after the Big Bang possibly from the material expelled in the first supernovae of the Milky Way", says Jonay González Hernández ...

The star has large amounts of carbon, nitrogen and oxygen, approximately 10, 8 and 3 percent respectively of its amount in the Sun while the calcium and iron content is almost one millionth of the solar. ...


The Extreme CNO-enhanced Composition of the Primitive Iron-poor Dwarf Star J0815+4729 ~ Jonay I. González Hernández et al
Know the quiet place within your heart and touch the rainbow of possibility; be
alive to the gentle breeze of communication, and please stop being such a jerk. — Garrison Keillor
Top
1 post • Page 1 of 1