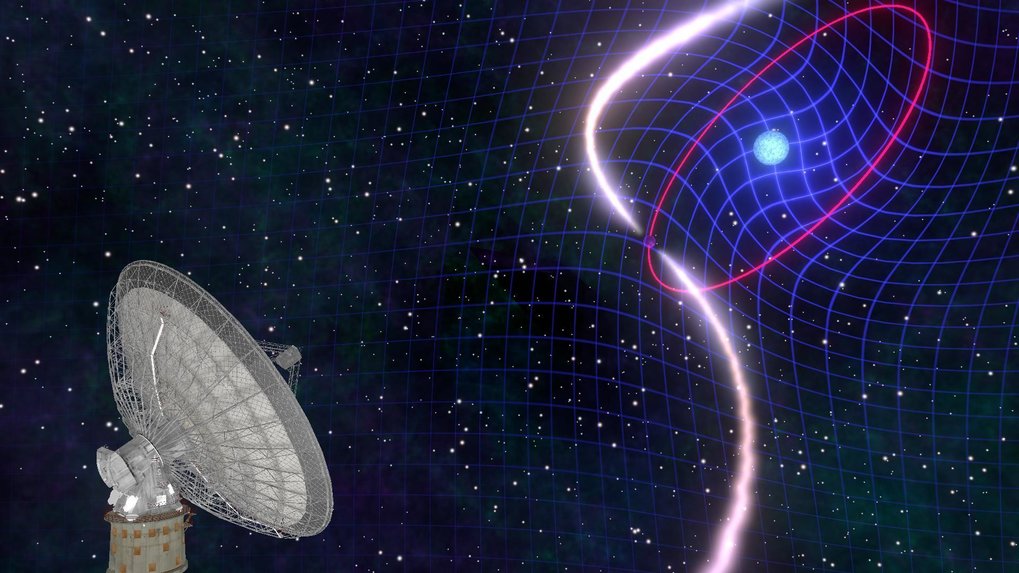 According to Einstein's general relativity, the rotation of a massive object produces a dragging of space-time in its vicinity. This effect has been measured, in the case of the Earth’s rotation, with satellite experiments. With the help of a radio pulsar, an international team of scientists ... were able to detect the swirling of the space-time around its fast-rotating white dwarf-companion star, and thus confirm the theory behind the formation of this unique binary star system. ...

In 1999, a unique binary system was discovered with the Australian Parkes Radio Telescope in the constellation Musca (the Fly), close to the famous Southern Cross constellation. In this system, the radio pulsar PSR J1141-6545 and a relatively massive white dwarf star orbit each other, with a ‘year’ lasting less than 5 hours. A radio pulsar is a fast-rotating neutron star, which emits radio waves along its magnetic poles. “This pulsar’s orbit is very special. It hurtles through space with a maximum speed of almost a million km/h in its orbit as the maximum separation between the stars is barely larger than the size of our Sun.’’, says Dr. Vivek Venkataraman Krishnan ...

Unlike other binary systems that consist of a pulsar and a white dwarf, theoretical models indicate that the white dwarf companion to PSR J1141-6545 formed before the pulsar. An important prediction of these models is that, before the supernova explosion that formed the pulsar, there was significant mass transfer from the progenitor of the pulsar to the white dwarf. This resulted in an enormous acceleration of the white dwarf's rotation. ...


Lense-Thirring Frame-Dragging Induced by a Fast Rotating
White Dwarf in a Binary Pulsar System ~ V. Venkatraman Krishnan et al
Know the quiet place within your heart and touch the rainbow of possibility; be
alive to the gentle breeze of communication, and please stop being such a jerk. — Garrison Keillor
Top
1 post • Page 1 of 1