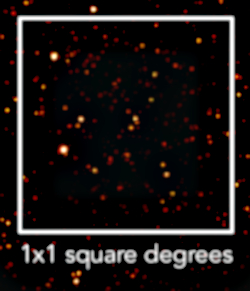 
What does an image of the entire sky look like in X-rays? The first attempt to answer this question was carried out by the ROSAT X-ray Satellite observatory in the 1990s. From July 30, 1990 through January 1991, as ROSAT revolved in its orbit around earth, it took X-ray images of complete strips of the sky, gradually stitching together an image of the X-ray sky. But space is dangerous - with about a week to go before the survey was completed, an on-board incident caused ROSAT to spin out of control, nearly destroying the spacecraft. Happily, the amazing mission engineers were able to rescue the satellite, and the ROSAT All-Sky Survey was finally completed in August 1991. The ROSAT All-Sky Survey detected more than 18,000 individual X-ray sources and allowed scientists to probe the properties of black holes, neutron stars, active X-ray galaxies, and flare stars, along with mapping the structure of the X-ray background. Though it provided a fundamental advance in our understanding of the X-ray cosmos, the ROSAT All-Sky Survey was limited in a number of ways. It was short, lasting less than a year, not very sensitive (most regions were only observed for a few minutes), and was limited in X-ray energy, since the ROSAT detectors were insensitive to higher-energy X-ray emission. On December 8, 2019, the next phase in our understanding of the entire X-ray sky began. This new X-ray survey is being carried out by the Spektr-RG observatory, which carries aboard two X-ray telescopes, eROSITA and ART-XC. SRG was launced into a parking orbit at the Sun-earth L2 point, about a million miles from earth. The workhorse instrument, eROSITA, is much more sensitive than the original ROSAT detectors, and extends to higher X-ray energies. The SRG All-Sky Survey will last for four years, about 8 times longer than the ROSAT survey. By the end of this survey, eROSITA is expected to detect 100,000 X-ray emitting clusters of galaxies to map out the distribution of normal and dark matter in the cosmic web, and will find millions of accreting supermassive black holes and half a million X-ray emitting stars. The image above shows an eROSITA image of a patch of the X-ray sky, covering an area of about 1/1000 of the whole sky.