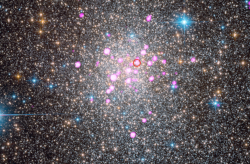 
Astronomers noticed something very strange going on in the Terzan 5 globular cluster, a crowded ball containing millions of stars crammed into a space several lightyears in radius, located about 19,000 light years from earth. Globular clusters have the highest density of stars that we know about. In addition to normal stars like the Sun, Terzan 5 contains neutron stars, the densest known objects in our Universe. Neutron stars are often found in binary systems with a normal star, and they can steal material from the companion star. As this stolen material falls onto the neutron star, it heats up, producing extremely hot gas that makes these binary systems glow in X-rays. For this reason such systems are called "low mass X-ray binaries" (LMXBs for short) by astronomers. But there are other neutron stars, the "millisecond pulsars" (or MSPs), which have extremely rapid spins, rotating nearly a thousand times per second. Imagine an object about the size of a city with a mass similar to the mass of the Sun spinning as fast as the blades in a kitchen blender, and you'll have a good picture of how extreme these millisecond pulsars are. For a long time, astronomers believed that millisecond pulsars were the descendents of accreting neutron stars in low-mass X-ray binaries. The idea was that the material accreted by a neutron star would increase the spin rate of the neutron star, eventually producing an extremely rapid spin rate. However, recent observations have shown that this relatively simple connection must in fact be much more complicated. The image above shows an optical image of Terzan 5, with an X-ray image from the Chandra X-ray Observatory shown in purple. As shown by the Chandra observations, there are far fewer X-ray emitting sources than there are optical stars. One of the weaker Chandra sources, labelled Terzan 5 CX1 (circled in red in the image above) is apparently an example of a rare class of objects called "transitional millisecond pulsars" (tMSPs). Only a handful of tMSPs are currently known. These strange objects can apparently flip from an accreting, low-mass X-ray binary state, to a rapidly spinning millisecond pulsar, and back again. Chandra observations show highly variable X-ray emission from CX1 which is consistent with the behavior of other tMSPs. Astronomers are actively searching for radio pulsations when the system may be in the MSP stage, to help solve the mystery of how these systems spin so fast.