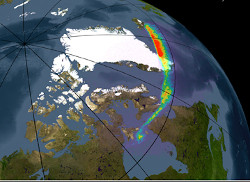 
Space observatories are generally designed to look far afield, to objects at enormous distances in both space and time. Sometimes, though, some of the most interesting things can be found closer to home. The Chandra X-ray Observatory has, throughout its 20-year history, has made important contributions to our understanding of the ways in which planets and comets in our solar system produce X-rays. It's perhaps surprising that "cool", relatively normal objects like comets (which are, after all, just overgrown, dirty snowballs) and planets emit X-rays, which are usually associated with hot, high energy processes like explosions and extreme objects like black holes and neutron stars. But comets and planets interact with high-energy charged particles from the Sun, emitted by the solar wind and by more energetic solar flares and coronal mass ejections, and such interactions produce X-ray emission. The image above shows X-ray emission from earth's "northern lights", the aurorae, taken by Chandra's High Resolution Camera, superimposed on a model image of the earth. The false-color X-ray emission from the earth's aurora shown in this image is produced by charged particles from the Sun trapped by the earth's magnetic field, which funnels them towards earth's magnetic poles. X-ray images of the outer planets (Mars, Jupiter, Saturn and Pluto) with Chandra and XMM-Newton have helped us to understand how solar particles interact with planets as the Sun's wind travels through the solar system.