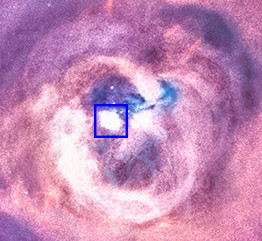 
The "theory of everything", a scientific framework that unites gravity and quantum mechanics, one that allows us to understand the laws of physics in a unified way, is one of the holy grails of modern science. This search has led down strange alleyways, and one strange but promising approach replaces sub-atomic particles with small, vibrating strings. This theoretical approach, string theory, has been remarkably successful in providing such a unifying mathematical framework. But most string theories require 10 or more physical dimensions, so they've been hard to test, especially for scientists confined, as we are, to our tiny, 3-dimensional cosmos. Some versions of string theory predict the existence of certain sub-atomic particles called axions, so detection of these strange particles would help constrain string theory. This might even help solve the riddle of dark matter, since some theories suggest that axions make up dark matter. Some axions are predicted to convert to X-rays (and vice-versa) as they pass through magnetized space, and, by looking at an enormous amount of magnetized space, it might just be possible to see signs of axions converting to X-rays and back again. Clusters of galaxies are the largest structures held together by gravity, and they contain enormous amounts of hot, magnetized, X-ray emitting gas. The image above is an X-ray image from the Chandra X-ray Observatory of the Perseus Cluster of galaxies, while the inset shows X-ray emission near a central, supermassive black in the nucleus of NGC 1275, a galaxy that lies near the center of the cluster. Axions passing through the hot intracluster gas should produce a tiny bit of excess X-ray emission at some X-ray wavelengths, and should remove X-rays at other wavelengths. Using Chandra, scientists targeted NGC 1275 to obtain a deep measurement of the distribution of the number of X-rays versus wavelength to test for small variations produced by axion conversion. This study put the most stringent limits on the number of axions traversing through the Perseus cluster yet obtained. Intriguingly, this deep study revealed no evidence of the interactions of axions with the X-ray emitting gas. This puts significant constraints on the existence of some types of axions predicted by some versions of string theory. This isn't the end of the story, and the axion hunt will continue, in laboratories on earth and in space.