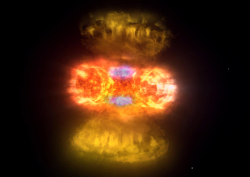 
A nova is a sudden brightening of a binary stellar system made up of a more-or-less run of the mill, ordinary star gravitationally bound together with a compact white dwarf star, the dense remnant of the core of an old star that's run out of fuel, lost its outer layers, and died. White dwarfs are so dense that a teaspoonful of white dwarf material would weigh about as much as a pickup truck. The word nova is derived from the Latin "nova stella" or "new star", although now we know they involve old, dead stars (another in a long line of astronomical misnomers that permeate the jargon of astronomers). A nova occurs when hydrogen, pulled off the normal star by the strong gravity of the white dwarf, accumulates on the white dwarf's surface and eventually becomes so hot and dense that a thermonuclear explosion occurs. Unlike the more powerful supernova explosion, a one-time event resulting in the complete destruction of a star, novae can recur since the white dwarf generally survives the explosion. It was long thought that the immense brightening accompanying the nova explosion (increases of brightness of thousands, even millions times) was produced by the surface explosion alone. However, observations of a nova explosion in 2018 called V906 Car has surprisingly revised this idea. V906 Car was first detected on March 20, 2018 by robotic ground-based telescopes, which quickly alerted their human colleagues that something interesting was just seen. A short time later, the Fermi Gamma-ray Space Telescope detected gamma rays coming from the nova, making it one of only a handful of novae seen to emit gamma-rays, the most energetic form of electromagnetic radiation we know. Gamma rays are usually produced by large numbers of subatomic particles accelerated to near the speed of light by strong shock waves produced by explosions or other violent events. The Fermi telescope was able to monitor the gamma-ray emission and unexpectedly found that the gamma rays increased and decreased in a peculiar, somewhat regular pattern. At nearly the same time, optical emission from the nova was also observed from space by a tiny (8-inch) satellite called BRITE-Toronto (part of a larger network of small satellites called the BRITE constellation). The optical emission is about a billion times less energetic than the gamma rays seen by Fermi. BRITE also saw a semi-regular rising and fading of the optical light. Surprisingly, a comparison of the gamma-ray and optical data showed, for the first time ever, that the variations of the gamma-ray and the optical light occurred in tandem. This meant that the enormous optical brightening of novae is not just produced by thermonuclear burning on the white dwarf's surface, but also by shock waves produced by collisions of fast and slower streams in the ejected material. Hard X-ray emission from the nova detected by the NuSTAR satellite observatory revealed the presence of highly absorbed X-ray emission from shocks produced by the collision of hot, fast moving gas with cooler, denser material. The image above shows a simulation of the material ejected in the explosion off the white dwarf at one point in time, showing the complex geometry of the explosion and the violent collisions that take place within the ejected material, while a spectacular animation shows how the explosion evolves with time.

Direct Evidence for Shock-Powered Optical Emission in a Nova ~ Elias Aydi et al
Know the quiet place within your heart and touch the rainbow of possibility; be
alive to the gentle breeze of communication, and please stop being such a jerk. — Garrison Keillor
Top 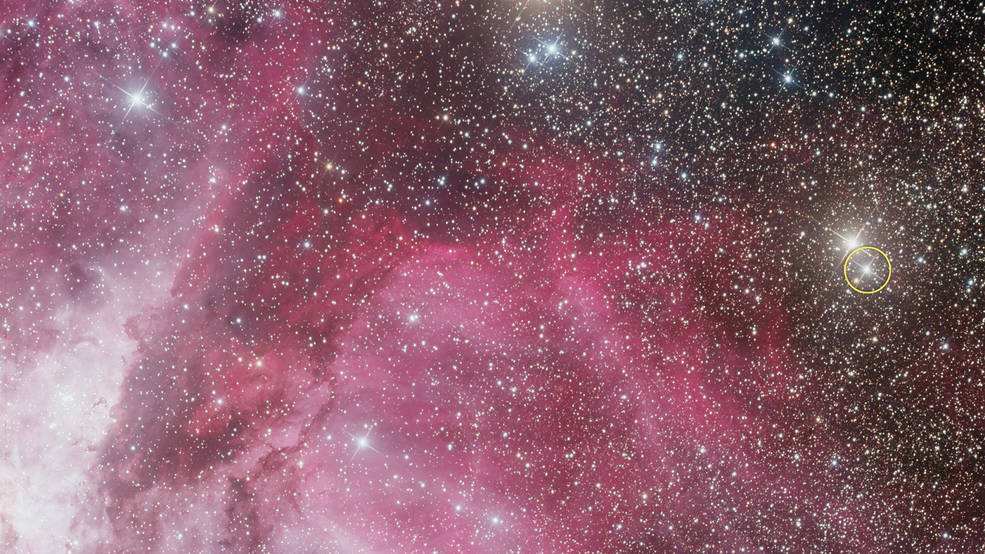 V906 Carinae (circled) shines near peak brightness in this image taken on March 23, 2018, three days after the nova was discovered. The beautiful cloud of gas and dust dominating the picture is part of the Carina Nebula. Credits: Copyright 2018 by A. Maury and J. Fabrega.

Carina Nebula Barretosmed.png
The Carina Nebula. V906 Carinae is located near the yellow-white star
at top left. Photo: Barretosmed.
You do not have the required permissions to view the files attached to this post.
Color Commentator
Top
3 posts • Page 1 of 1