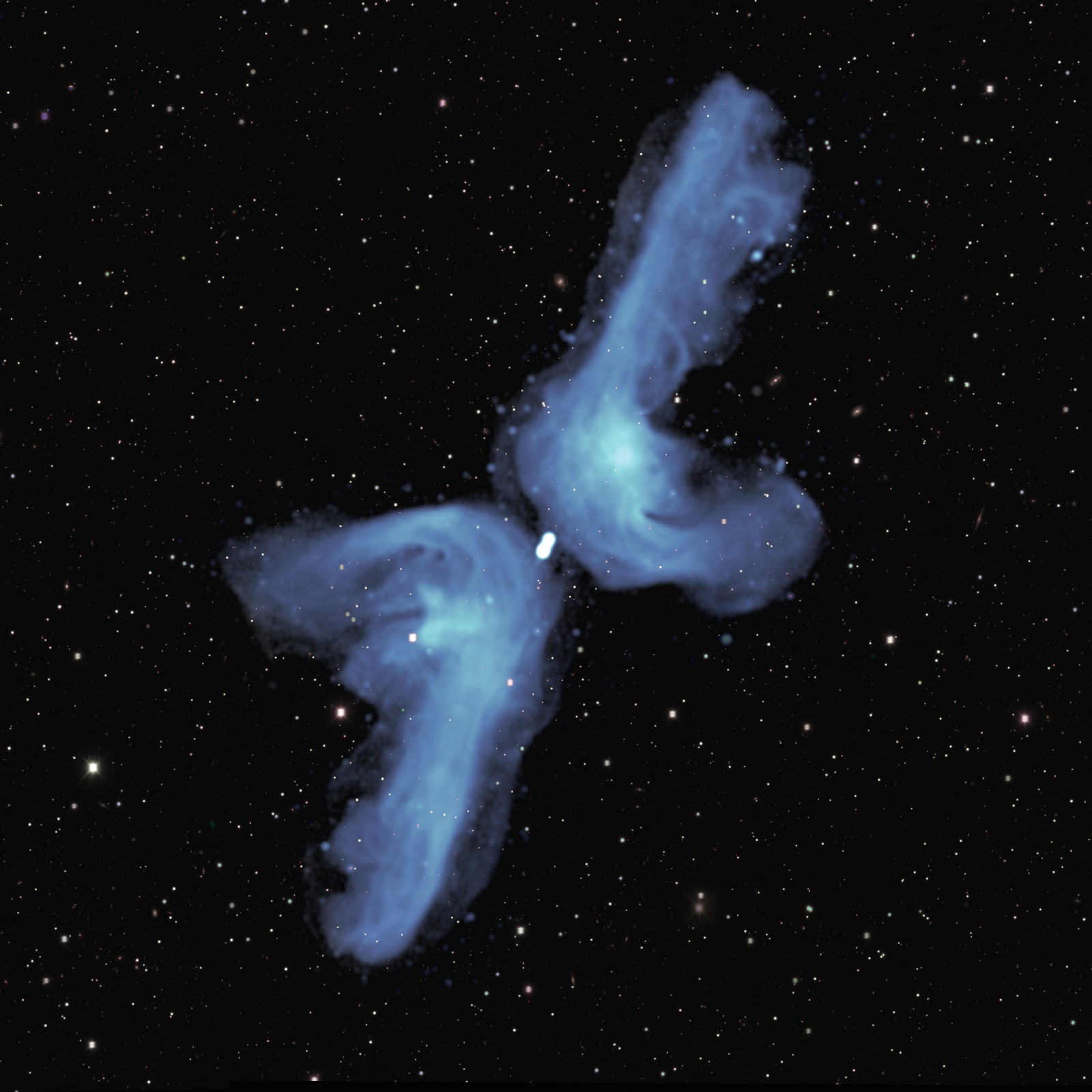 The galaxy PKS 2014-55, located 800 million light years from Earth, is classified as ‘X-shaped’ because of its appearance in previous relatively blurry images. The detail provided in this radio image obtained with the MeerKAT telescope indicates that its shape is best described as a ‘double boomerang’. Adapted from W Cotton et al, MNRAS (2020). Credit: NRAO/AUI/NSF; SARAO; DES.

A team of astronomers from South Africa and the US have used the MeerKAT telescope to solve a longstanding puzzle in ‘X’-shaped radio galaxies.

Many galaxies far more active than the Milky Way have enormous twin jets of radio waves extending far into intergalactic space. Normally these go in opposite directions, coming from a massive black hole at the centre of the galaxy. However, a few are more complicated and appear to have four jets forming an ‘X’ on the sky.

Several possible explanations have been proposed to understand this phenomenon. These include changes in the direction of spin of the black hole at the centre of the galaxy, and associated jets, over millions of years; two black holes each associated with a pair of jets; and material falling back into the galaxy being deflected into different directions forming the other two arms of the ‘X’.

Exquisite new MeerKAT observations of one such galaxy, PKS 2014-55, strongly favour the latter explanation as they show material “turning the corner” as it flows back towards the host galaxy; ...

Previous studies of these unusual galaxies lacked the high quality imaging provided by the recently completed MeerKAT telescope. This telescope array consists of 64 radio dishes located in the Karoo semi-desert in the Northern Cape province of South Africa. Computers combined the data from these antennas into a telescope 8 km in diameter, and provided images in the radio band of unprecedented quality for PKS 2014-55 which enabled solving the mystery of its shape. ...


Hydrodynamical Backflow in X-shaped Radio Galaxy PKS 2014-55 ~ W. D. Cotton et al
Know the quiet place within your heart and touch the rainbow of possibility; be
alive to the gentle breeze of communication, and please stop being such a jerk. — Garrison Keillor
Top
1 post • Page 1 of 1