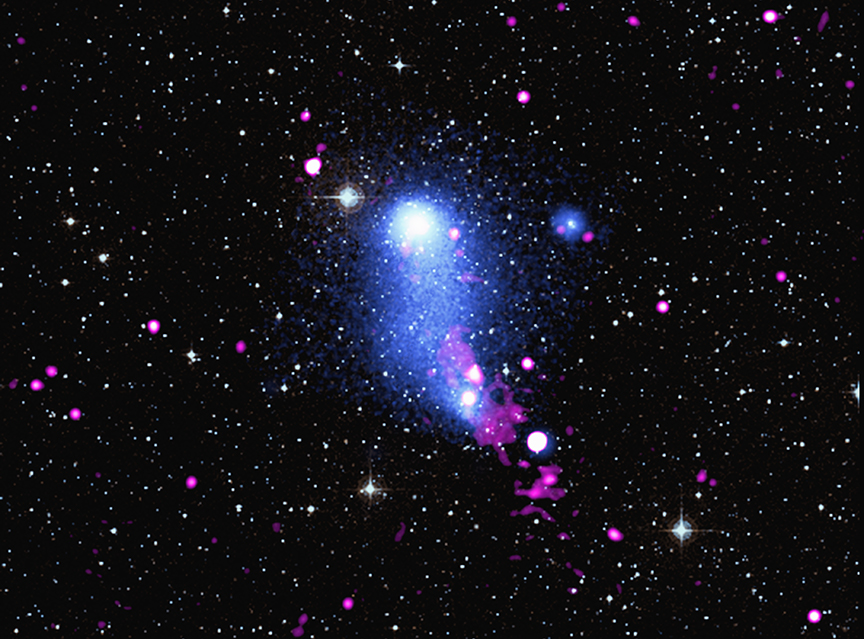 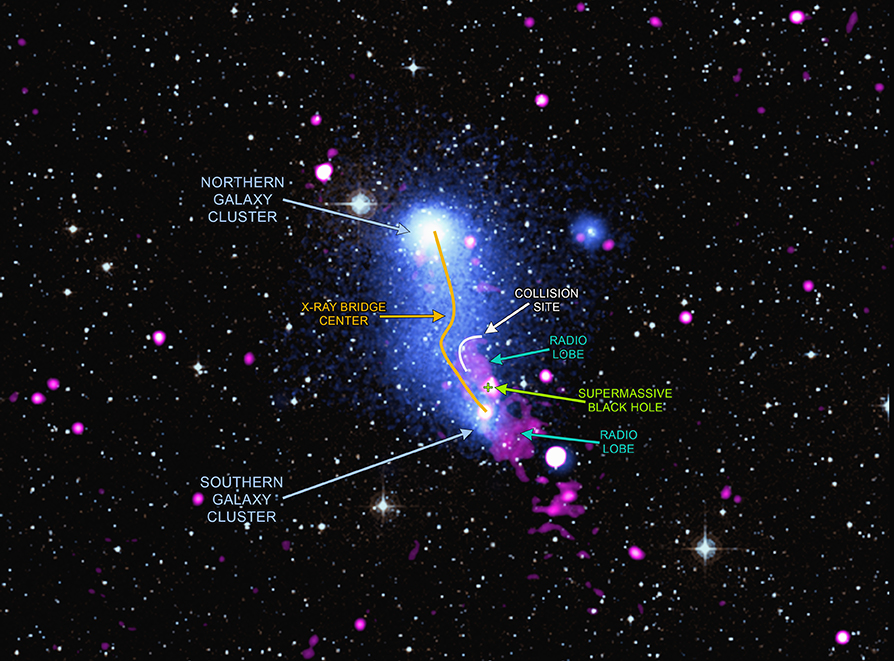 X-ray: NASA/CXC/SAO/V.Parekh, et al. & ESA/XMM-Newton; Radio: NCRA/GMRT
Several hundred million years ago, two galaxy clusters collided and then passed through each other. This mighty event released a flood of hot gas from each galaxy cluster that formed an unusual bridge between the two objects. This bridge is now being pummeled by particles driven away from a supermassive black hole.

Galaxy clusters are the largest objects in the universe held together by gravity. They contain hundreds or thousands of galaxies, vast amounts of multi-million-degree gas that glow in X-rays, and enormous reservoirs of unseen dark matter.

The system known as Abell 2384 shows the giant structures that can result when two galaxy clusters collide. A superheated gas bridge in Abell 2384 is shown in this composite image of X-rays from NASA's Chandra X-ray Observatory and ESA's XMM-Newton (blue), as well as the Giant Metrewave Radio Telescope in India (red). This new multi-wavelength view reveals the effects of a jet shooting away from a supermassive black hole in the center of a galaxy in one of the clusters. The jet is so powerful that it is bending the shape of the gas bridge, which extends for over 3 million light years and has the mass of about 6 trillion Suns.

A labeled version of the image traces the shape of the bridge, marks the position of the supermassive black hole, and shows where the jet is pushing the hot gas in the bridge sideways at the collision site. The lobe of radio emission marking the end of each jet is also shown. At the collision site, astronomers found evidence for a shock front, similar to a sonic boom from a supersonic aircraft, which can keep the gas hot and prevent it from cooling to form new stars. ...


A Rare Case of FR I Interaction with a Hot X-ray Bridge in the A2384 Galaxy Cluster ~ V. Parekh et al
Know the quiet place within your heart and touch the rainbow of possibility; be
alive to the gentle breeze of communication, and please stop being such a jerk. — Garrison Keillor
Top
1 post • Page 1 of 1