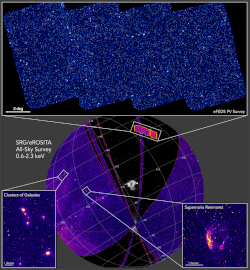 
Somewhere at L2, peculiar gravitational balance point a million miles from earth along the Sun-earth line, a lonely spacecraft called Spektr-RG (SRG for short) goes about its dedicated business, to make the best map of the X-ray sky ever obtained. This mapping started on Decembe 8, 2019, using two specially designed telescopes, ART-XC and its workhorse instrument, eROSITA. These telescopes scan strips of the entire sky every four hours. As the year goes by, the L2 point and SRG move around the Sun, and an entire picture of the full X-ray sky is eventually built up, strip-by-strip. Early results from the first half year of the survey have been spectacular. The image above shows a projection of the eROSITA All-Sky Survey image (in purple) on the celestial sphere. Inset images at the bottom highlight two particularly interesting regions of the sky, one containing an extragalactic supercluster and the other a supernova remnant in the Milky Way, showing the exceptional quality of the images being obtained. The top image shows the eFEDS survey, a deeper image of a selected region of the sky taken during the early verification phase of the mission. This eFEDS image has has an exposure similar to the exposure of the entire sky at the end of the SRG survey. SRG will complete the first X-ray map of the entire sky in mid-June 2020. The final SRG survey will provide a unique resource to study a broad range of outstanding science topics, like the properties and behavior of individual X-ray emitting sources in our Galaxy (stars, black holes, pulsars, white dwarfs, remnants of old explosions) and beyond, and will provide answers to outstanding questions about the distribution and activity of supermassive black holes over cosmic time, and the structure and origins of the Universe itself.