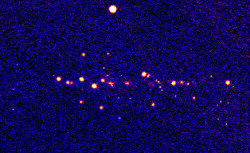 
In its lonely halo orbit 1.5 million miles from earth, the Spektr-RG observatory (SRG for short) scans great circles on the sky around the Sun-Earth L2 point (the first Russian observatory to operate there). SRG carries two telescopes, eROSITA and ART-XC, and these two telescopes map out the entire X-ray Universe every six months. SRG has just finished its first all-sky X-ray survey, which lasted from December 8, 2019 until June 10, 2020. The ART-XC telescope provides the highest-resolution wide-field images in the high-energy X-ray band (4-30 keV), and so provides a revolutionary new view of the X-ray Universe. Because the high-energy X-rays that ART-XC observes can penetrate through vast amounts of dust, ART-XC can find obscured objects hidden to telescopes which operate in lower energy bands. The image above shows the very first all-sky map obtained by ART-XC, in the 4-12 keV band. ART-XC has already detected nearly 600 objects, about two thirds of which are within the Milky Way, and the remainder beyond our Galaxy. The bright areas in the upper left and lower right of the image are the ecliptic poles, which are more highly exposed due to SRG's orbit around the Sun-Earth line. The all-sky survey will be repeated 7 more times over the next 3.5 years, building up exposure to detect ever-fainter sources and allowing scientists to monitor changes in the X-ray sky. ART-XC is expected to eventually find around 10 thousand hard X-ray sources, providing a unique census of actively feeding supermassive black holes and other strange objects. The ART-XC telescope was developed by the Space Research Institute (Moscow) and the Russian Federal Nuclear Center (Sarov), while its mirrors were fabricated by NASA's Marshall Space Flight Center.

eROSITA: Our Deepest View of the X-ray Sky


The eROSITA telescope has provided a new, sharp view of hot and energetic processes across the Universe. The energetic universe as seen with the eROSITA X-ray telescope. The first eROSITA all-sky survey was conducted over a period of six months by letting the telescope rotate continuously, thus providing a uniform exposure of about 150-200 seconds over most of the sky, with the ecliptic poles being visited more deeply. Credit: Jeremy Sanders, Hermann Brunner and the eSASS team (MPE); Eugene Churazov, Marat Gilfanov (on behalf of IKI)

Over the course of 182 days, the eROSITA X-ray telescope onboard SRG has completed its first full sweep of the sky. This new map of the hot, energetic universe contains more than one million objects, roughly doubling the number of known X-ray sources discovered over the 60-year history of X-ray astronomy. Most of the new sources are active galactic nuclei at cosmological distances, marking the growth of gigantic black holes over cosmic time. Clusters of galaxies in the new map will be used to track the growth of cosmic structures and constrain cosmological parameters. Closer to home, stars with hot coronae, binaries and supernova remnants dot our Galaxy, and we now have a complete map of the hot baryons in the Milky Way, something that can only be achieved with the 360-degree view provided by the eROSITA survey.

A million X-ray sources revealing the nature of the hot universe – this is the impressive harvest of the first scan of the entire sky with the eROSITA telescope onboard SRG. ...

This first complete sky image from eROSITA is about 4 times deeper than the previous all-sky survey by the ROSAT telescope 30 years ago, and has yielded around 10 times more sources: about as many as have been discovered by all past X-ray telescopes combined. And while most classes of astronomical objects emit in X-rays, the hot and energetic Universe looks quite different to the one seen by optical or radio telescopes. Looking outside the body of our Galaxy, most of the eROSITA sources are active galactic nuclei, accreting supermassive black holes at cosmological distances, interspersed with clusters of galaxies, which appear as extended X-ray haloes shining thanks to the hot gas confined by their huge concentrations of dark matter. The all-sky image reveals in exquisite detail the structure of the hot gas in the Milky Way itself, and the circum-galactic medium, which surrounds it, whose properties are key to understanding the formation history of our Galaxy. The eROSITA X-ray map also reveals stars with strong, magnetically active hot coronae, X-ray binary stars containing neutron stars, black holes or white dwarves, and spectacular supernova remnants in our own and other nearby galaxies such as the Magellanic clouds. ...

Re: eROSITA: Our Deepest View of the X-ray Sky

viewtopic.php?t=40725
Know the quiet place within your heart and touch the rainbow of possibility; be
alive to the gentle breeze of communication, and please stop being such a jerk. — Garrison Keillor
Top
3 posts • Page 1 of 1