MPIfR: A Spiral Galaxy with a Huge Magnetic Field

MPIfR: A Spiral Galaxy with a Huge Magnetic Field 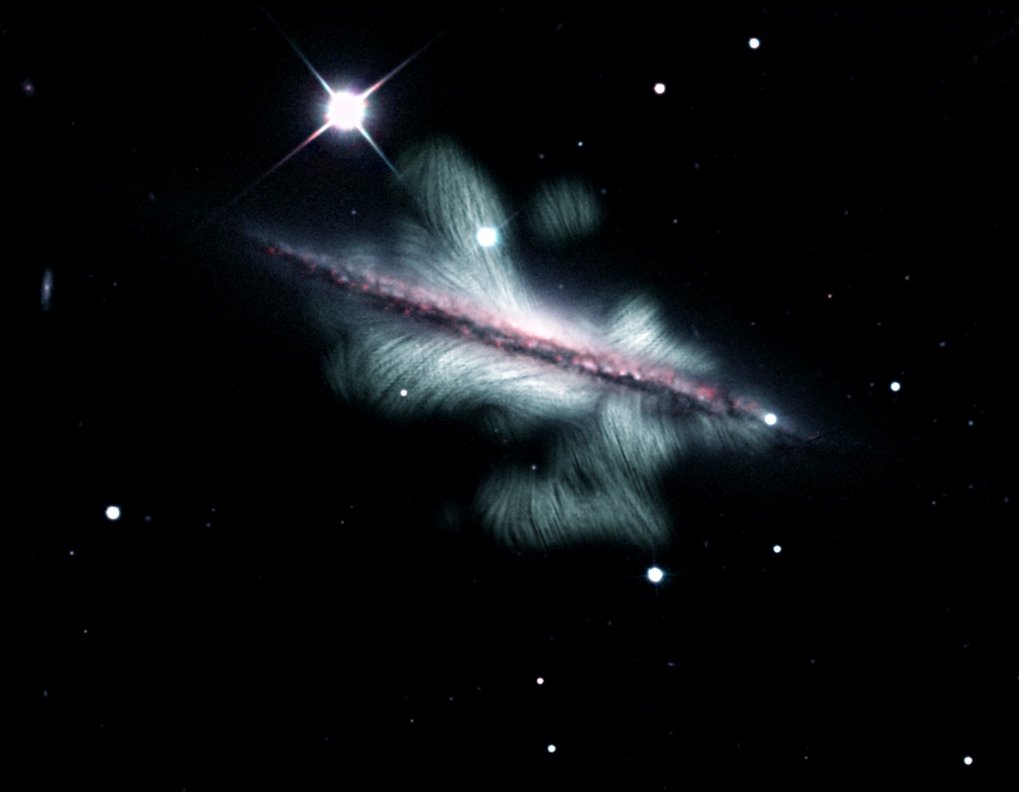 Superbubbles, giant loops and X-shaped magnetic field structures – this galaxy boasts a veritable wealth of shapes. How such structures are formed is a mystery. Some clues are provided by a new study led by Yelena Stein within the framework of the CHANG-ES project (“Continuum HAlos in Nearby Galaxies -- an EVLA Survey”). Rainer Beck, a scientist from the Max Planck Institute for Radio Astronomy (MPIfR) in Bonn, Germany, participated in the study. For a comprehensive image of the magnetic field structures, the researchers combined different methods that enabled them to visualise the ordered and chaotic magnetic fields of the galaxy both along the line of sight and perpendicular to it. ...

Spiral galaxies such as our Milky Way can have sprawling magnetic fields. There are various theories about their formation, but so far the process is not well understood. An international research team has now analysed the magnetic field of the Milky Way-like galaxy NGC 4217 in detail on the basis of radio astronomical observations and has discovered as yet unknown magnetic field structures. The data suggest that star formation and star explosions, so-called supernovae, are responsible for the visible structures.

The analysed data had been compiled in the project “Continuum Halos in Nearby Galaxies”, where radio waves were utilised to measure 35 galaxies. “Galaxy NGC 4217 is of particular interest to us,” explains Yelena Stein, who began the study at the Chair of Astronomy at Ruhr-Universität Bochum under Professor Ralf-Jürgen Dettmar and who currently works at the Centre de Données astronomiques de Strasbourg. NGC 4217 is similar to the Milky Way and is only about 67 million light years away, which means relatively close to it, in the Ursa Major constellation. The researchers therefore hope to successfully transfer some of their findings to our home galaxy. ...

CHANG-ES XXI. Transport Processes and the X-shaped Magnetic Field
of NGC 4217: Off-center Superbubble Structure ~ Y. Stein et al
Know the quiet place within your heart and touch the rainbow of possibility; be
alive to the gentle breeze of communication, and please stop being such a jerk. — Garrison Keillor
Top
1 post • Page 1 of 1