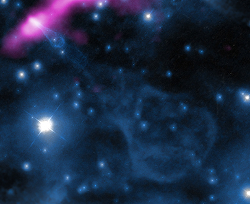 
When massive stars run out of thermonuclear fuel, they collapse and explode. The catastrophic collapse (happening in a matter of seconds) produces a tiny, incredibly dense, rapidly spinning neutron star at the center of the dying star. Collapsing outer layers of the star then fall on the surface of the new neutron star and bounce off, creating a strong shock that helps destroy the star in a supernova explosion. If this explosion is not equally powerful in all directions, then the the neutron star can get a powerful kick in one direction, propelling it through the galaxy at enormous speeds. As it careers through the galaxy, its motion can produce a strong bow shock, like the wake of a speedboat on a lake. A particularly interesting wake is the unusual "Guitar Nebula" produced by the spinning neutron star pulsar known as B2224+65 as it speeds through the Milky Way at millions of miles per hour. The image above shows an optical image of the nebula, which indeed has a shape like an dreadnought guitar, with the pulsar at its head. An X-ray image from the Chandra X-ray Observatory shows an energetic, one-sided jet from the neutron star which is nearly perpendicular to the neutron star's direction of motion. It's not clear yet how these features formed. One interpretation suggests that the Guitar Nebula may be produced by a "wind" of subatomic particles coming off the neutron star, swept back by the high velocity of B2224+65 through space, and that the jet might be composed of sub-atomic particles moving at near light speed along the magnetic poles of the neutron star. The misalignment of the jet and the Guitar Nebula is still a mystery.