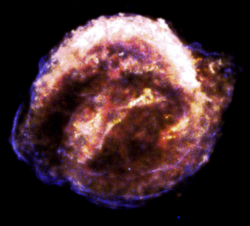 
About 416 years ago, skywatchers were astounded to find a bright new object dotting the night sky, brighter than any known star and brighter than the planet Mars. First seen on October 9, 1604 by Ilario Altobelli in Verona and Raffaello Gualterotti in Florence, first reported by Lodovico delle Colombe and subsequently named for famed astronomer Johannes Kepler, Kepler's supernova is now known to be the thermonuclear explosion of a white dwarf star pushed over its stability limits by the accretion of matter (probably from a companion star). The explosion created an enormous, outward expanding sphere of hot, X-ray emitting ejected gas, moving into space at speeds of millions of miles per hour. Because Kepler's supernova is in the Milky Way, and relatively nearby (about 20,000 lightyears away - so that the explosion actually occurred around 18,000 BCE) it offers an important case study to understand how supernova explosions help seed the Universe with those chemicals necessary for life. The image above is a high-resolution X-ray image of Kepler's supernova obtained by the Chandra X-ray Observatory. The Kepler supernova remnant has been observed by Chandra for over 15 years, allowing astronomers to watch in near real time how the hot, exploded matter evolves as it expands. Chandra's unique, high resolution images have allowed astronomers to create a movie of the expansion to show the subtle changes occuring in the hot shocked ejecta. Monitoring the expansion is important not only to see how matter is distributed into the Galaxy by the explosion, but also for the information it gives about the symmetry of how the progenitor white dwarf star actually exploded.


CXC: Debris from Stellar Explosion Not Slowed after 400 Years
A Tour of Kepler's Supernova Remnant
viewtopic.php?t=40914