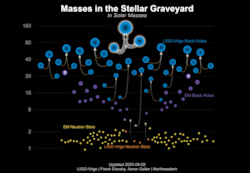 
How big (or how little) can black holes be? Although we have good understanding about the minimum and maximum masses of stars, oddly enough, we don't know the mass range of the black holes that these stars may become. That's because black holes in binary systems can merge with each other, forming ever larger black holes. (Black holes can also lose mass, but that's a tale for another time.) We've identified black holes with masses of a few Suns, and supermassive black holes at the centers of galaxies which have masses of millions (or even billions) of Suns. But we don't have lots of examples of black holes with masses of hundreds or thousands of Suns lying between these two mass extremes (and the evidence we do have is somewhat controversial). Arguably, the best evidence we've got for the existence of a "middleweight" black hole was obtained on May 25, 2019 by the LIGO and Virgo gravitational wave observatories. These observatories measure ripples in spacetime itself from passing waves of gravity produced when binary black holes (or neutron stars, or some combination) spiral together and eventually merge, in accordance with the precepts of Einstein's theory of gravity. On May 25, 2019, the LIGO and Virgo observatories recorded strong, sudden signals from the crests of a passing gravitational wave. This wave was so sudden that it suggested an unusual merger event not seen before: the merger of two very massive black holes. In this event, a black hole with a mass of 85 Suns merged with its partner, which had a mass of 66 Suns, producing a black hole with a mass of 142 Suns. The energy of the mass difference between the progenitor black holes, with a total mass of 151 Suns, and the final merger, 142 Suns, was radiated away as the gravitational waves that LIGO and Virgo saw. The image above summarizes the masses of known black holes and neutron stars determined from measuring either electromagnetic or gravitational radiation they produced (or in rare instances, both). The massive black holes involved in the May 2019 event, GW20190521, are highlighted at the top of the figure.