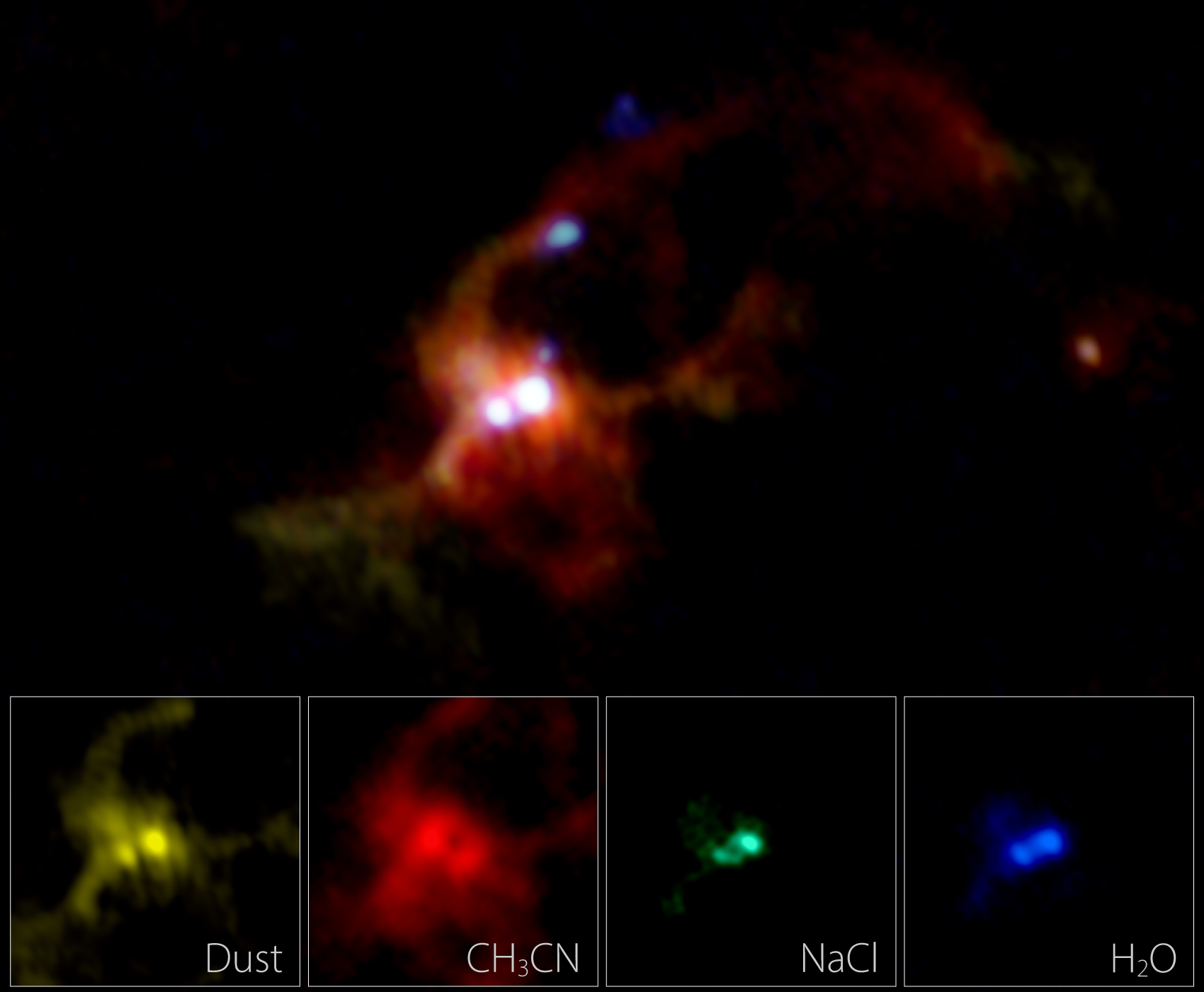 ALMA composite image of a binary massive protostar IRAS 16547-4247. Different colors show the different distributions of dust particles (yellow), methyl cyanide (CH3CN, red), salt (NaCl, green), and hot water vapor (H2O, blue). Bottom insets are the close-up views of each components. Dust and methyl cyanide are distributed widely around the binary, whereas salt and water vapor are concentrated in the disk around each protostar. In the wide-field image, the jets from one of the protostars, seen as several dots in the above image, are shown in light blue. Credit: ALMA (ESO/NAOJ/NRAO), Tanaka et al (2020 ApJL)

Using the Atacama Large Millimeter/submillimeter Array (ALMA), astronomers spotted a pair of massive baby stars growing in salty cosmic soup. Each star is shrouded by a gaseous disk which includes molecules of sodium chloride, commonly known as table salt, and heated water vapor. Analyzing the radio emissions from the salt and water, the team found that the disks are counter rotating. This is the second detection of salt around massive young stars, promising that salt is an excellent marker to explore the immediate surroundings of giant baby stars.

There are stars of many different masses in the universe. Smaller ones only have one-tenth the mass of the Sun, while larger ones have 10 times or more mass than the Sun. Regardless of the mass, all stars are formed in cosmic clouds of gas and dust. Astronomers have eagerly studied the origins of stars, however, the process of massive star formation is still veiled. This is because the formation sites of massive stars are located farther from the Earth, and massive baby stars are surrounded by massive clouds with complicated structures. These two facts prevent astronomers from obtaining clear views of massive young stars and their formation sites.

A team of astronomers led by Kei Tanaka at the National Astronomical Observatory of Japan utilized ALMA’s power to investigate the environment where massive stars are forming. They observed the massive young binary IRAS 16547-4247. The team detected radio emissions from a wide variety of molecules. Particularly, sodium chloride (NaCl) and hot water (H2O) are found to be associated in the immediate vicinity of each star, i.e., the circumstellar disk. On the other hand, other molecules such as methyl cyanide (CH3CN), which has commonly been observed in previous studies of massive young stars, were detected further out, but do not trace structures in the vicinity of stars well. ...


Salt, Hot Water, and Silicon Compounds Tracing Massive Twin Disks ~ Kei E. I. Tanaka et al
viewtopic.php?t=34614
Know the quiet place within your heart and touch the rainbow of possibility; be
alive to the gentle breeze of communication, and please stop being such a jerk. — Garrison Keillor
Top
1 post • Page 1 of 1