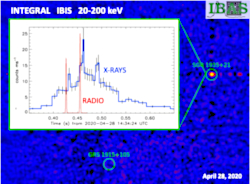 
It's hard to understand things that happen quickly and randomly. This is especially true when those events occur in deep space. In the 1970's, astronomers discovered mysterious short outbursts of gamma-rays. The nature of these Gamma-ray Bursts (GRBs) remained mysterious for decades; no one knew how far away the sources were, how powerful they were, or what the nature of the sources truly was. A breakthrough observation of a gamma-ray burst X-ray afterglow by the BeppoSAX high-energy satellite observatory finally established that gamma-ray bursts were at extragalactic distances and thus extremely powerful events involving the explosive deaths of high-mass stars or merging neutron stars, as we know now. A similar mystery was discovered in 2007 when astronomers saw strong bursts in the radio band lasting only a few milliseconds. Because these "fast radio bursts" (FRBs) last for only a few milliseconds, it's extremely difficult for followup observations at other wavelengths to determine what they are. But last April, astronomers got the first evidence tying FRBs and GRBs together. The image above shows a hard X-ray image of a region of the sky containing a source called SGR 1935+21, a powerful source in the Milky Way. SGR 1935+21 is a "soft gamma-ray repeater", a neutron star with an extremely strong magnetic field (or "magnetar") which shows repeating short bursts of low-energy (or "soft") gamma-rays. The inset graph shows the time-history of the high-energy X-ray brightness of SGR 1935+21 as observed by the IBIS instrument on the INTEGRAL observatory in April 2020. IBIS detected brief pulses in high energy X-rays from SGR 1935+21. Just before the high energy X-ray pulses seen by IBIS, radio observations by the CHIME and STARE2 radio telescopes showed brief spikes in the radio brightness of the source similar to those seen from other FRBs. The coincidence of the radio and X-ray pulses from this magnetar provides strong evidence that at least some of the mysterious FRBs are produced by powerful outbursts associated with highly-magnetized neutron stars.