MPIA/MPG: Encounter of Generations in the Heart of the Galaxy

MPIA/MPG: Encounter of Generations in the Heart of the Galaxy 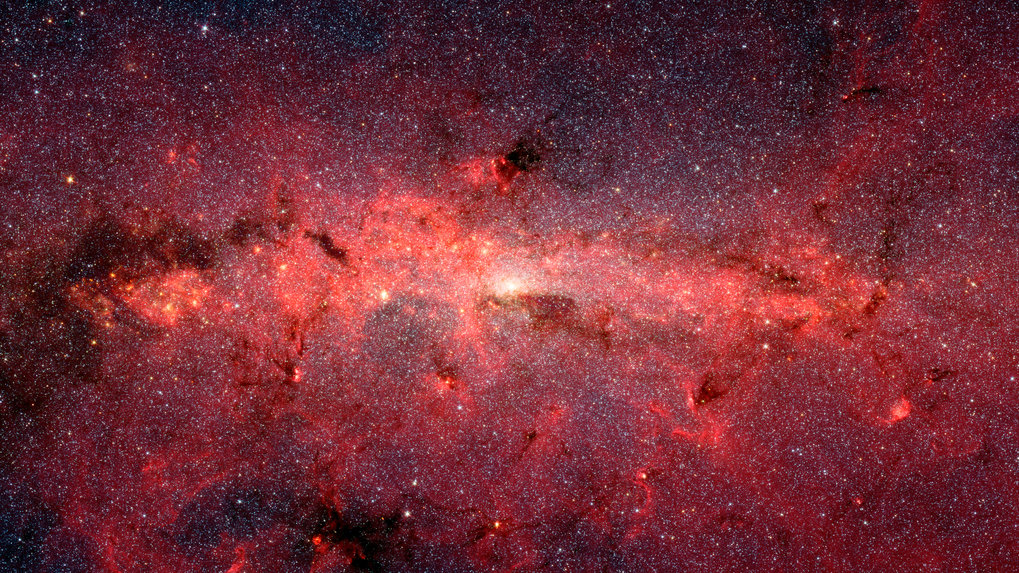 Central region of the Milky Way in infrared light. With this image, NASA's Spitzer Space Telescope has photographed the inner 890 x 640 light years of the Milky Way. The nuclear star cluster is located in a small area near the central massive black hole. The extended structures in the image are mostly clouds of gas and dust from the spiral arms of the Milky Way, which lie in the line of sight between Earth and the Galactic Centre. Credit: NASA/JPL-Caltech/S. Solovy (Spitzer Science Center/Caltech)

The centre of our home galaxy is one of the regions richest in stars in the known Universe. Within this region, scientists have now identified a previously unknown, ancient stellar population with surprising properties. An international team of astronomers ... has identified the origin of these stars to be a globular cluster within our galaxy, which moved to the centre of the Milky Way long ago. ...

The Milky Way is by no means unique, and astronomers now believe that most spiral galaxies could contain both a central black hole and a nuclear star cluster. However, the nuclear star cluster within the Milky Way is the only place where astronomers can resolve individual stars because of its relatively close distance, making it an ideal laboratory for studying the properties of these huge stellar clusters. ...

In analysing these observations, an international team of researchers ... has now discovered a previously unknown population of stars within the nuclear star cluster. While the majority of stars in the central region of the Milky Way have higher metallicities than the Sun, the scientists identified a group of stars that contained significantly less heavy elements. In addition, these stars are characterised by a common, higher velocity than that of the surrounding stars, and their direction of motion may be slightly tilted in relation to the galactic plane. The properties of these stars, which account for about 7% of all stars in the nuclear star cluster, are surprisingly similar. It is therefore obvious that these stars have a common origin. But how did they reach the innermost part of the galaxy? ...