ESO: Galaxies Trapped in the Web of a Supermassive Black Hole

ESO: Galaxies Trapped in the Web of a Supermassive Black Hole 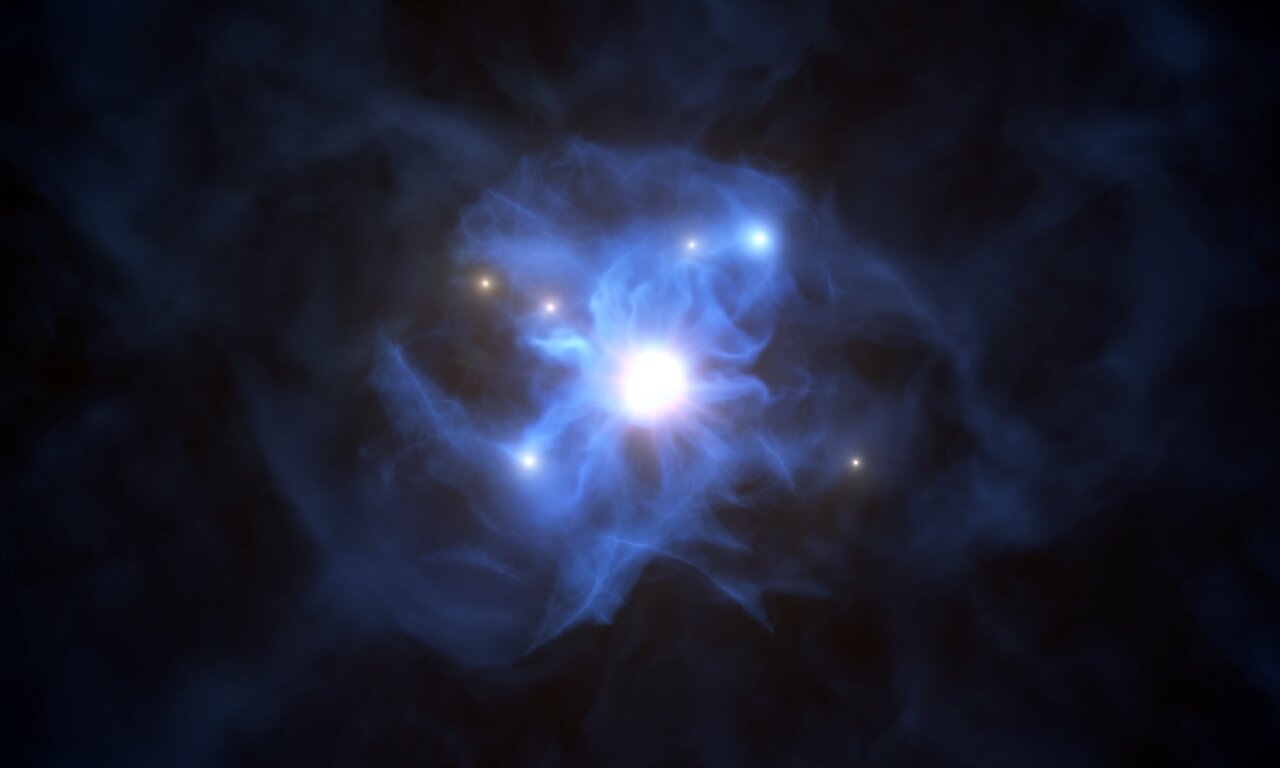 Illustration of the Web of the Supermassive Black Hole ~ Credit: ESO/L. Calçada

With the help of ESO’s Very Large Telescope (VLT), astronomers have found six galaxies lying around a supermassive black hole when the Universe was less than a billion years old. This is the first time such a close grouping has been seen so soon after the Big Bang and the finding helps us better understand how supermassive black holes, one of which exists at the centre of our Milky Way, formed and grew to their enormous sizes so quickly. It supports the theory that black holes can grow rapidly within large, web-like structures which contain plenty of gas to fuel them.

“This research was mainly driven by the desire to understand some of the most challenging astronomical objects — supermassive black holes in the early Universe. These are extreme systems and to date we have had no good explanation for their existence,” said Marco Mignoli ...

The new observations with ESO’s VLT revealed several galaxies surrounding a supermassive black hole, all lying in a cosmic “spider’s web” of gas extending to over 300 times the size of the Milky Way. “The cosmic web filaments are like spider’s web threads,” explains Mignoli. “The galaxies stand and grow where the filaments cross, and streams of gas — available to fuel both the galaxies and the central supermassive black hole — can flow along the filaments.”

The light from this large web-like structure, with its black hole of one billion solar masses, has travelled to us from a time when the Universe was only 0.9 billion years old. ...

Web of the Giant: Spectroscopic Confirmation of a Large-Scale
Structure around the z = 6.31 Quasar SDSS J1030+0524 ~ Marco Mignoli et al
Last edited by bystander on Fri Oct 02, 2020 3:44 pm, edited 1 time in total.
Reason: Added LBTO article link
Know the quiet place within your heart and touch the rainbow of possibility; be
alive to the gentle breeze of communication, and please stop being such a jerk. — Garrison Keillor
Top
1 post • Page 1 of 1