MPS: Arrokoth: Flattening of a Snowman

MPS: Arrokoth: Flattening of a Snowman


Only in the course of several million years did the trans-Neptunian object Arrokothn acquire its bizarre, pancake-flat shape 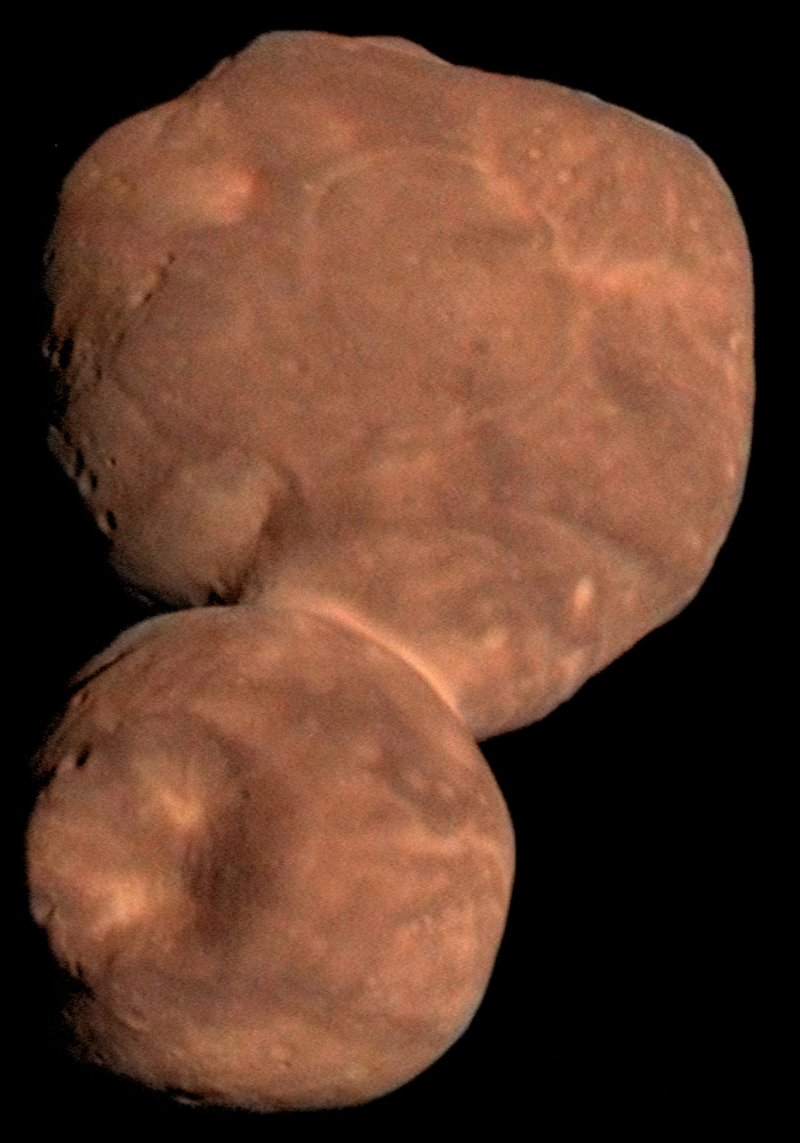 Arrokoth’s flattened shape can only be seen from a certain perspective. The first images returned by NASA’s New Horizons spacecraft gave the impression of a “normal” snowman-shaped object. Arrokoth’s surface is surprisingly smooth and displays only few craters. Credit: NASA/JHUAPL/SwRI

The trans-Neptunian object Arrokoth, also known as Ultima Thule, which NASA’s space probe New Horizons passed on New Year's Day 2019, may have changed its shape significantly in the first 100 million years since its formation. In today's issue of the journal Nature Astronomy, researchers led by the Chinese Academy of Sciences and the Max Planck Institute for Solar System Research (MPS) suggest that the current shape of Arrokoth, which resembles a flattened snowman, could be of evolutionary origin due to volatile outgassing. Their calculations help to understand what the current state of bodies from the edge of the Solar System may teach us about their original properties.

The many millions of bodies populating the Kuiper Belt beyond Neptune's orbit are yet to reveal many of their secrets. In the 1980s, the space probes Pioneer 1 and 2 as well as Voyager 1 and 2 crossed this region ? but without cameras on board. NASA’s spacecraft New Horizons sent the first images from the outermost edge of the solar system to Earth: in the summer of 2015 of dwarf planet Pluto and three and a half years later of the trans-Neptunian object Arrokoth, about 30 kilometers in size. Not yet officially named, the body was nicknamed Ultima Thule at the time, in reference to the northernmost land point on Earth. After all, the trans-Neptunian object is the body furthest away from the Sun that has ever been visited and imaged by a man-made probe.

Especially Arrokoth’s strange shape caused a sensation in the days after the fly-by. The body is a contact binary, believed to be a result of low velocity merging of two separate bodies that formed close together. It is composed of two connected lobes, of which the smaller one is slightly flattened, the larger one strongly so, creating the impression of a squashed snowman. In their current publication, the researchers from China, Germany, and the USA investigate how this shape came to be. A pronounced bi-lobed shape is also known from some comets. However, there is no other known body that is as flat as Arrokoth. Did Arrokoth already look like this when it was created? Or did its shape develop gradually? ...


Sublimation as an effective mechanism for flattened lobes of (486958) Arrokoth ~ Y. Zhao et al
Know the quiet place within your heart and touch the rainbow of possibility; be
alive to the gentle breeze of communication, and please stop being such a jerk. — Garrison Keillor
Top

Re: MPS: Arrokoth: Flattening of a Snowman

Jake and the Fatman? No, it's Pancake and the Flatman.
Just as zero is not equal to infinity, everything coming from nothing is illogical.
Top

Re: MPS: Arrokoth: Flattening of a Snowman