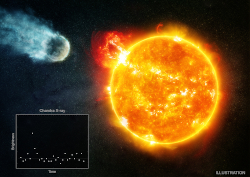 
There are lots and lots of tiny, faint red dwarf stars, which make up perhaps more than half the nearly 1 billion stars in our Milky Way. And many if not most of these stars have a planet orbiting them (or two or three or five), and many of those planets reside in the star's habitable zone, where liquid water (and life) can in principle exist. How many of these millions or billions of stars in our Galaxy support life? The ironic thing is that, because red dwarfs are so dim, these potentially habitable planets must orbit very close to their host stars. Red dwarf stars are dangerously active, since they have strong magnetic fields which drive stellar explosions, scaled-up versions of solar flares. What impact do these strong stellar "superflares" have on any nearby planets? A recent study of the X-ray activity by the Chandra X-ray Observatory of Barnard's star has helped to answer this question. Barnard's star is one of the nearest red dwarfs to earth, only 6 lightyears away. Chandra observations of Barnard's star showed a strong X-ray outburst produced by a stellar flare in an observation lasting only 7 hours. The image above is an artist's illustration of a planet in the habitable zone around a red dwarf similar to Barnard's star. The inset shows the X-ray brightness of Barnard's star during the Chandra observation; a large increase in X-ray brightness occurs near the start of the observation. This observation suggests that about 25% of the time, Barnard's star erupts in potentially dangerous superflares. The most damaging effects of these flares would be to help strip away any atmosphere around the planet, making life on the planet unlikely, if not impossible.


CXC: Assessing the Habitability of Planets Around Old Red Dwarfs

CXC: Assessing the Habitability of Planets Around Old Red Dwarfs 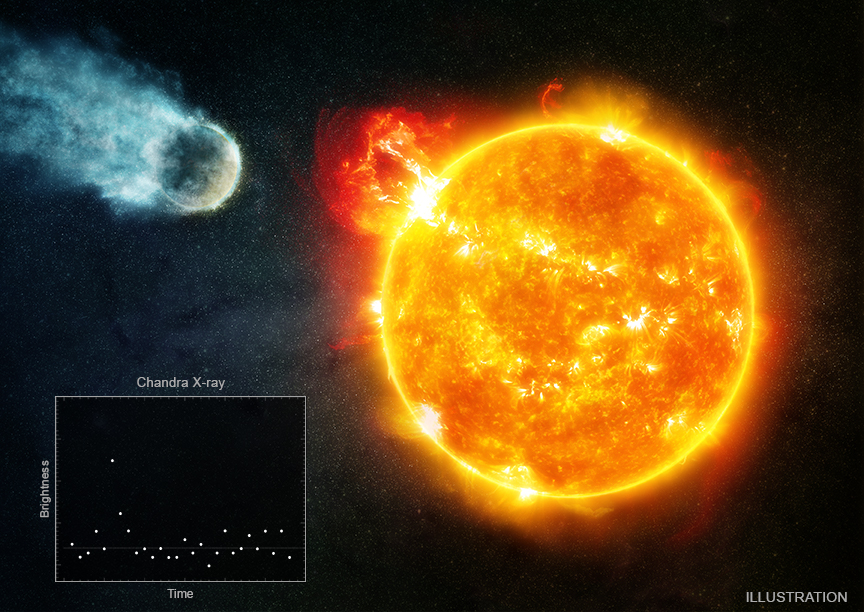 A new study using data from NASA's Chandra X-ray Observatory and Hubble Space Telescope gives new insight into an important question: how habitable are planets that orbit the most common type of stars in the Galaxy? The target of the new study, as reported in our press release, is Barnard's Star, which is one of the closest stars to Earth at a distance of just 6 light years. Barnard's Star is a red dwarf, a small star that slowly burns through its fuel supply and can last much longer than medium-sized stars like our Sun. It is about 10 billion years old, making it twice the age of the Sun.

The research team's Chandra observations of Barnard's Star taken in June 2019 uncovered one X-ray flare (shown in the inset box) and their Hubble observations taken in March 2019 revealed two ultraviolet high-energy flares (shown in an additional graphic). Both observations were about seven hours long and both plots show X-ray or ultraviolet brightness extending down to zero. Based on the length of the flares and of the observations, the authors concluded that Barnard's Star unleashes potentially destructive flares about 25% of the time. ...


The High-Energy Radiation Environment around a 10 Gyr M Dwarf: Habitable at Last? ~ Kevin France et al
viewtopic.php?p=306376#p306376
Know the quiet place within your heart and touch the rainbow of possibility; be
alive to the gentle breeze of communication, and please stop being such a jerk. — Garrison Keillor
Top

There are lots and lots of tiny, faint red dwarf stars, which make up

perhaps more than half the nearly 1 billion stars in our Milky Way.

Thanks for pointing this ambiguity out Art.

We've heard since our youth that the Milky Way contains "about 100 billion stars", but with advances in telescopes we've learned that the true number is likely to be closer to 1 trillion, which is probably what the writer of the first article intended. The second article uses billion in the more common short scale sense when saying Barnard's star is "about 10 billion years old."

Clearly there's a need for uniformity in science publications. Exponential notation is both uniform and concise. Using 10^6, 10E9 or 1012 for million, billion and trillion is better than words that have double meanings.
Just as zero is not equal to infinity, everything coming from nothing is illogical.
Top
4 posts • Page 1 of 1